Hermione Corfield is an English film and TV actor, best known for her performances in blockbuster hit films such as ‘Mission: Impossible – Rogue Nation’ and ‘Star Wars: The Last Jedi.’ Corfield made her film debut with the segment ‘Colton's Big Night’ in the Sebastian Solberg-directed LGBT romance film ‘50 Kisses.’ Although relatively new to the entertainment industry, Hermione has already performed in several big-budget films, sharing screen space with some of the biggest stars of the film industry. These include the Tom Cruise-starrer sensational hit ‘Mission: Impossible – Rogue Nation,’ the Ian McKellen-starrer mystery film ‘Mr. Holmes,’ and the Vin Diesel-starrer action film ‘XXX: Return of Xander Cage.’ She also appeared in the critically and commercially successful ‘Academy Award’-nominated second installment of the ‘Star Wars’ sequel trilogy, ‘Star Wars: The Last Jedi.’ Her starring role of ‘Sawyer Scott’ in the independent thriller–drama film ‘Rust Creek’ earned Corfield immense critical acclaim. She will star as ‘Hope’ in the upcoming action-heist film ‘The Misfits.’ Corfield has also made her presence felt on the small screen, playing ‘Emma Garland’ in the British period drama ‘The Halcyon.’ 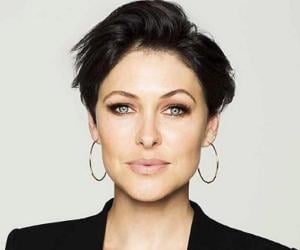 Phoebe Dynevor
Actresses #2597
Film & Theater Personalities #6529
DID WE MISS SOMEONE?
CLICK HERE AND TELL US
WE'LL MAKE SURE
THEY'RE HERE A.S.A.P
Quick Facts

British People
British Actresses
Sagittarius Actresses
Actresses Who Are In Their 20s
Women Film & Theater Personalities
Childhood & Early Life
Hermione Isla Conyngham Corfield was born on December 19, 1993, in London, England, to Richard Conyngham Corfield and Emma Willis. Her mother is a ‘Jermyn Street’ shirt designer. Her father is from the Corfield family of Chatwall Hall, Shropshire, and has served as the managing director of ‘Lloyd Broking Firm.’ He has also written a few books that have become bestsellers. Corfield has a sister named Isadora and a brother named Kai.
Corfield studied at the selective independent day and boarding school for girls called ‘Downe House School,’ located in the village of Cold Ash near Newbury, Berkshire. In school, she participated in several popular school plays and gradually developed an interest in acting. After completing school, she worked in her mother’s shop to save money for acting school. She then attended ‘University College London,’ where she studied English Literature.
Her passion for acting later led her to join the ‘Lee Strasberg Theatre and Film Institute’ in New York and complete a course in method acting. According to some sources, Corfield commenced her career in the entertainment industry as a model at just 15 years of age. She modeled for British brands such as ‘William Morris London’ and ‘Pocket Sport.’ She once mentioned that her modeling pursuits helped her earn her course fees for acting school.
Continue Reading Below
You May Like

The Sexiest Men Of 2020, Ranked
Career
Corfield stepped into the world of cinema with the role of ‘Anna’ in the segment ‘Colton's Big Night’ from the 2014-released LGBT romance film ‘50 Kisses,’ directed by Sebastian Solberg. The same year, she was cast as ‘Gabrielle "Gabbe" Givens’ in the American romantic fantasy–drama film ‘Fallen.’ It initially released in the Philippines, Singapore, and Malaysia in 2016 and later in the UK and in the US in 2017.
In 2015, she appeared in two notable critically and commercially successful films. One of them was the Bill Condon-directed and Ian McKellen and Laura Linney-starrer mystery film ‘Mr. Holmes,’ which featured her as ‘Matinee Ann Kelmot.’ The other was the Christopher McQuarrie-directed and Tom Cruise-starrer action spy film ‘Mission: Impossible – Rogue Nation,’ in which she appeared as a record shop keeper/‘IMF’ agent. It emerged as the eighth-highest-grossing film of the year.
The 2016-released British–American historical action/comedy/horror film ‘Pride and Prejudice and Zombies,’ based on the 2009 novel of the same name by Seth Grahame-Smith, featured Corfield in the role of ‘Cassandra Featherstone.’ The film garnered generally mixed reviews from critics but failed to make an impression at the box office. While continuing with different film projects, she appeared as ‘Cassie Watkins’ in a 2016 episode of the British detective drama ‘Endeavour,’ titled ‘Prey.’
She starred as ‘Emma Garland’ in the British period drama series ‘The Halcyon,’ which aired on ‘ITV’ for a season, from January 2, 2017, to February 20, 2017.
Corfield bolstered her film career with the role of ‘Ainsley,’ a close ally of Vin Diesel’s titular character in the D. J. Caruso-directed American action film ‘XXX: Return of Xander Cage.’ Released by ‘Paramount Pictures’ on January 20, 2017, the film grossed a whopping $346.1 million at the box office, against a budget of $85 million, thus emerging as the highest-grosser of ‘Revolution Studios’ and the ‘XXX’ franchise. The same year, she also appeared as ‘Syren 3’ in the Guy Ritchie-directed and Charlie Hunnam and Jude Law-starrer epic fantasy ‘King Arthur: Legend of the Sword.’ The film, however, could not make much of an impression on audiences or critics.
Corfield played the lead role of ‘Tatiana’ in the dark comedy/drama/mystery film ‘Bees Make Honey.’ The movie had its premiere at the ‘Raindance Film Festival’ in September 2017.
One of the most notable films featuring Corfield was the Rian Johnson-written and directed American epic space-opera flick ‘Star Wars: The Last Jedi.’ This was the second film of the ‘Star Wars’ sequel trilogy. Corfield played ‘Resistance A-Wing’ pilot and squadron leader ‘Tallissan "Tallie" Lintra’ in the film. The film had its world premiere on December 9, 2017, at the ‘Shrine Auditorium’ in Los Angeles, and was released theatrically in the US on December 15 that year. It received several awards and nominations, including four ‘Academy Award’ nominations, and emerged as the highest-grosser of the year, fetching over $1.3 billion worldwide.
She earned critical acclaim with her performance as ‘Sawyer Scott’ in the independent thriller–drama film ‘Rust Creek.’ The film had its premiere at the ‘Bentonville Film Festival’ on May 3, 2018, and bagged the ‘Best Thriller Feature’ honor at the ‘San Diego International Film Festival’ that year. It was released in the video-on-demand format on January 4, 2019, by ‘IFC Midnight Films.’ Meanwhile, she starred as ‘Clemsie Lawrence’ in the horror–comedy film ‘Slaughterhouse Rulez,’ which released on October 31, 2018, in the UK and Ireland.
The 2019-released British–Spanish historical drama film ‘Born a King’ featured her in the starring role of ‘Princess Mary.’
She will be seen as ‘Hope’ in the forthcoming action-heist film ‘The Misfits.’ It is planned for a 2020 release.
Corfield has also been part of an advertisement campaign for ‘Schweppes,’ appearing with famous Spanish actor and model Penélope Cruz.
Family & Personal Life
It seems that Corfield prefers to keep her personal life away from the limelight, as she has not revealed much about her relationship status. However, according to some sources, the diva has, reportedly, been dating musician Andreas Shaw for several years and the two share a studio apartment in East London. Corfield and Shaw have been seen together in various public places. They were also spotted together in Hochfugen, Austria.
A photo tweeted by ‘The Fallen Series’ on March 10, 2016, claiming that Corfield and Shaw were dating each other, led several news tabloids to claim that the two were lovebirds. Corfield and Shaw, however, have maintained their silence in this regard, and neither has accepted or denied such rumors.

See the events in life of Hermione Corfield in Chronological Order 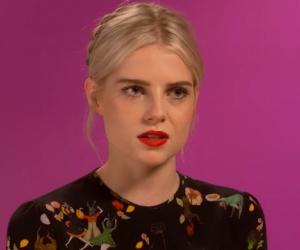