Advanced Search
Henry Valentine Miller was an American writer whose most early books were banned in the US for being obscene but became popular primarily in Europe after being published in Paris. He is known mostly for his semi-autobiographical writing style, which was blended with character study, social criticism, philosophical reflection, stream of consciousness, explicit language, surrealism and mysticism. Miller, who was married five times, apart from several other romantic involvements, was very much influenced by his relationship with his second wife June Miller, which formed the basis of 'The Rosy Crucifixion' trilogy. His other notable books include 'Tropic of Cancer', 'Black Spring', and 'Tropic of Capricorn', all of which were initially published in Paris and were not officially available in the US until 1961. Also a talented artist, he painted nearly 2,000 watercolors during his life, and wrote books in the field as well. Cause of Death: Circulatory Complications

American Celebrities
Male Writers
Male Novelists
Capricorn Writers
American Writers
Childhood & Early Life
Henry Valentine Miller was born on December 26, 1891 in Yorkville, Manhattan, New York, United States, to Louise Marie and Heinrich Miller. His father was a tailor.
Henry was raised alongside his sister Lauretta Anna Miller, initially in Williamsburg, Brooklyn, and later in the Bushwick section of Brooklyn, where he finished elementary schooling.
He studied at the Eastern District High School in Williamsburg and attended the City College of New York for two months before dropping out. He joined Atlas Portland Cement Company in 1909, worked as a ranch hand in 1913, while travelling through the Western states, and briefly worked in his father's tailor shop in 1914. 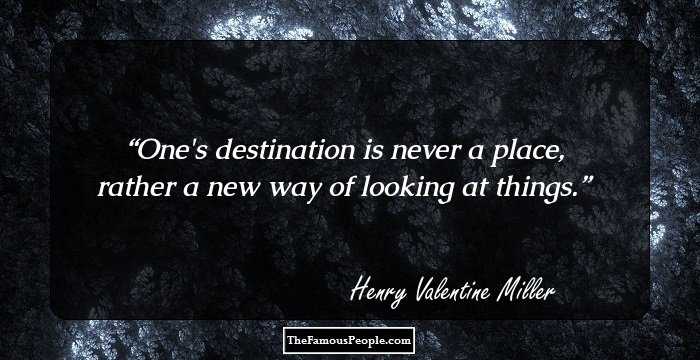 Quotes: Never
Continue Reading Below
Literary Career
Henry Valentine Miller, who worked as a personnel manager at the Western Union office in Lower Manhattan in 1920-24, wrote his first novel, 'Clipped Wings', during a three-week vacation in March 1922. It was a study of twelve Western Union messengers, which was never published but he re-used parts from it in his later works.
He left his job in 1924 to fully focus on writing, and in 1927-28, wrote his second novel, 'Moloch: or, This Gentile World'. Written under the pretense that his wife June was the author, this novel remained unpublished during his lifetime, and was finally published in 1992, 12 years after his death.
His third novel, 'Crazy Cock', focused on June's close relationship with the artist Marion, whom she had renamed Jean Kronski, who lived with the Millers in 1926-27. He spent several months in Paris with June in 1928, financed by one of her admirers, but moved to the French city alone in 1930 and began writing his candid autobiographical book 'Tropic of Cancer'.
In 1931, he bagged a proofreading job with the Paris edition of the 'Chicago Tribune' through his friend Alfred Perlès, in whose name he also occasionally submitted articles to the daily. He published 'Tropic of Cancer' in Paris in 1934, with the help of writer Anaïs Nin, with whom he was having an affair, and her husband, filmmaker Hugh Guiler.
He continued to write two more books with detailed accounts of sexual experiences— 'Black Spring' (1936) and 'Tropic of Capricorn' (1939) —which were all smuggled into the US and earned him an underground reputation. His first book published in the US was 'The Cosmological Eye' (1939), which was a collection of short prose pieces from his earlier works.
In 1939, he went to Greece after being invited by his friend Lawrence Durrell, and described his visit in the 1941 book, 'The Colossus of Maroussi'. He finally returned to New York in 1940, and recorded his experiences from his year-long journey through the US in his memoir 'The Air-Conditioned Nightmare', published later in 1945.
When he moved to California in 1942, he was already writing 'Sexus', the first novel in 'The Rosy Crucifixion' trilogy, which was banned in the US and was published in France and Japan in 1949. His two other books from this period, 'Sunday After the War' (1944) and 'The Air-Conditioned Nightmare', were both critical of American consumerism.
During the 1940s, he made hundreds of watercolor paintings which were exhibited in 1943 at Beverly Glen, American Contemporary Gallery, Hollywood, and in 1944 at Santa Barbara Museum of Art, California and in London.
In 1944, he moved to Big Sur, which he described as "my first real home in America", and finished 'Sexus', as well as the two other volumes in the trilogy, 'Plexus' (1953) and 'Nexus' (1959).
Continue Reading Below
He published the novella 'Quiet Days in Clichy' in 1956, followed by 'Big Sur and the Oranges of Hieronymus Bosch', a memoir about his life in Big Sur, California, in 1957. His true work of fiction, the short story 'The Smile at the Foot of the Ladder', was published in 1959.
He continued to write until his death, and notably recorded his experience of turning 80 in three essays from the chapbook 'On Turning Eighty' (1972). Several other books by him, pamphlets, as well as his correspondence with others, have been published during his lifetime and after his death.
Family & Personal Life
Henry Valentine Miller met his first love, Cora Seward, at Eastern District High School, Brooklyn, in 1907. In 1910, he had an affair with Pauline Chouteau from Phoebus, Virginia, who was "old enough to be my mother".
His first marriage was to Beatrice Sylvas Wickens, a pianist from Brooklyn, with whom he welcomed his first child, daughter Barbara, in 1919. The marriage fell apart in 1923 after he became enamored with dancer Juliet Edith Smerth, stage name June Mansfield, and their divorce was finalized on December 21, 1923.
He married June on June 1, 1924, but a few years after Miller moved to Paris, she divorced him by proxy in Mexico City in 1934. By this time, he was having an affair with French-Cuban American diarist and author Anaïs Nin, who would write extensively about their relationship in her journals.
After he settled at Big Sur in December 1944, he married his third wife, Janina Martha Lepska, a philosophy student originally from Poland who was 30 years his younger. They had two children together, daughter Valentine and son Tony, but their marriage ended in divorce in 1952.
His next marriage was in 1953, to Eve McClure, who was 37 years younger than him, and two years later, he met with his daughter Barbara for the first time in 30 years. He divorced from Eve in 1960, and she died, possibly because of her alcoholism, in 1966.
In 1967, he married his fifth wife, Japanese born singer Hoki Tokuda, but this marriage also ended in divorce in 1977. At the age of 84, he became involved in a relationship with his 24-year-old pen-friend Brenda Venus, a young 'Playboy' model and columnist, actress and dancer.
At the age of 88, Miller died of circulatory complications at his home in Pacific Palisades on June 7, 1980. His body was cremated and his two children from his third marriage, Valentine and Tony, shared his ashes.
Trivia
Henry Valentine Miller's book 'Tropic of Cancer' was banned in the US for nearly two decades before the US Supreme Court declared the book a work of literature in 1964. This event contributed significantly to the sexual revolution that spread throughout the United States in the early 1960s.