The rag to riches story of Hand Aaron, a retired American baseball player, is remarkable and inspirational in the true sense. Born in an extremely poor family, little Aaron had to take up several odd jobs to support his family. With hardly any interest in studies and a passion for sports, he had made up his mind about baseball from a very young age. Therefore, when opportunity knocked his door, he took it and never turned back. However, his ethnicity as an African-American, always posed as an obstacle. Being an African-American and playing major league was far from being appreciated and he was continually threatened with dire consequences. However, his daunting spirit and his blind love for the game, kept him going and took him all the way up, to the top of the success ladder. Soon, he proved his worth in major league baseball and set new records. After an immensely successful stint, he was honored with several awards and medals and was inducted into the Baseball Hall of Fame. Despite being born and raised in the unfortunate circumstances of poverty and racism, Aaron was never really bogged down by these challenges. He had his goal set, right from beginning and crossed every hurdle that came his way to be become a baseball legend. American Celebrities
Baseball Players
Black Sportspersons
Black Baseball Players
American Men
Childhood & Early Life
Aaron was born into a poor family to Herbert and Estella Aaron as the third of their eight children.
He attended the Central High School, where he played football and baseball and was outstanding in both. Later, he transferred to Josephine Allen Institute, a private school, for a better future in baseball.
In 1951 he quit school and played for the ‘Negro Baseball League's Indianopolis Clowns’. 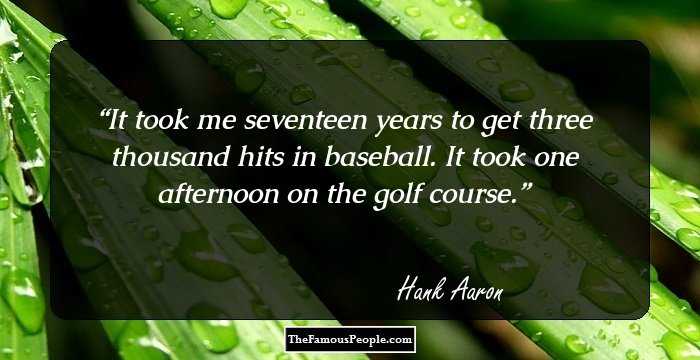 The Sexiest Men Of 2020, Ranked
Career
After leading his team to success in the 1952 Negro League World Series, he joined the Milwaukee Braves, who put him the minor league baseball ‘Eau Claire Bears’.
He made his Major League debut in 1954 and finished the season with a fair .280 hit score. He finished the 1955 season with a .314 average, 27 home runs and 106 RBI
He played exceptionally well in 1956 and in 1957 he won the ‘Most Valuable Player’ title after making 44 homeruns and hitting an impressive .322. The same year he led his team Milwaukee Braves to a surprise victory in the World Series over the New York Yankees.
He reached a whopping 3000 hit in 1970, while playing against Cincinnati Reds and became the first player to reach this far.
In 1973, he fell short of one run, in breaking the record of legendary player Babe Ruth, who had a total of 714 homeruns. However, in April 1974 he broke the record and created his own with a massive 715 homeruns. The same year on October 5, he hit his last homerun to make a total of 733 runs.
It was speculated that he would retire and when did not, his team traded him to Milwaukee Brewers. He broke the ‘Run batted in’ (RBI) record of Babe Ruth once again, in May 1975.
In 1976, he retired as a player and joined the Atlanta Braves as their executive and later became their vice-president. His job was to look for new team prospects and supervise the coaching of minor leaguers which resulted in making the Braves one of the strongest teams in National League. He was later promoted as their senior vice-president. 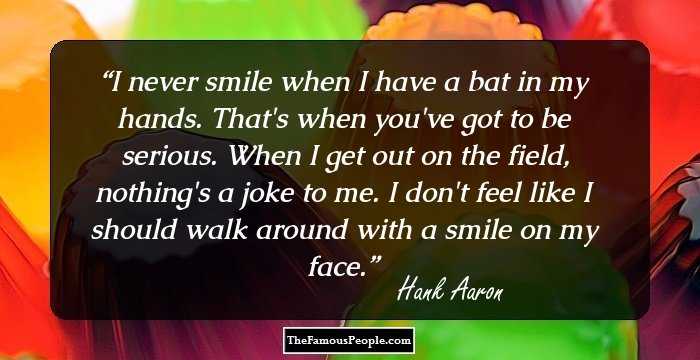 Quotes: Me, Never, Like, I
Awards & Achievements
Aaron was inducted into the Baseball Hall of Fame on August 1, 1982, after a ballot in which he came second.
Continue Reading Below
On January 8, 2001, U.S. President Bill Clinton awarded him the second highest civilian award ‘Presidential Citizens Medal’.
Molefi Kete Asante, an African-American scholar, historian, and philosopher, entered Aaron’s name on his list of ‘100 Greatest African-Americans’, in 2002.
He received the ‘Presidential Medal of Freedom’ the highest civilian honor, from U.S. President George W. Bush in June 2002.
Personal Life & Legacy
Aaron married Barbara Lucas in 1953 and the couple had four children before they divorced in 1971.
He married Billye Williams in 1973 and has one daughter Ceci with her.
He is the elder brother of Tommie Lee Aaron, a baseball player who died at 45 after suffering from leukemia.
He published his autobiography ‘I Had a Hammer’ in 1990.
‘Hank Aaron Award’ was created in 1999 to be awarded to the best hitter who performs the best in each league. 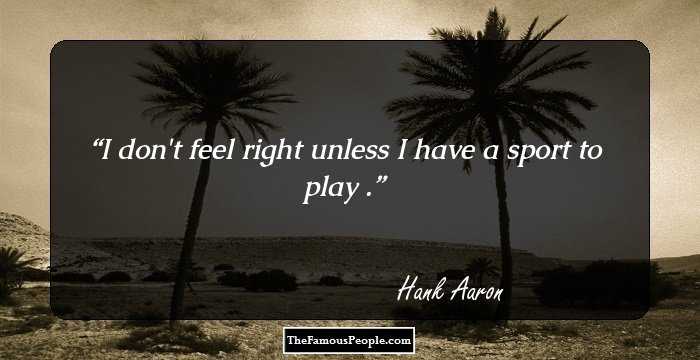 See the events in life of Hank Aaron in Chronological Order