Joe Morgan was universally regarded as one of the best second basemen ever to play baseball as he reached the heights of both personal and team success with ‘Cincinnati Reds’. In his early career, he was constantly under-estimated due to his small frame, and hence even professional teams hesitated to sign him. Finally, he signed for ‘Houston Colt .45s’ and made a favourable impression very soon. However, he also had to endure racism during this period which affected him to such an extent that he even considered quitting baseball. However, he persevered and progressed to the major league and became a consistent player for the Astros. But with time, his relationship with then-manager deteriorated and he was eventually sold to ‘Cincinnati Reds’. Here, Morgan was part of a team regarded as one of the best ever in baseball and was a dominant force for almost a decade. Together with other star players like Pete Rose, Johnny Bench, Tony Perez etc., he helped the team win an unprecedented back-to-back ‘World Series Titles’, with Morgan being the ‘Most Valuable Player’ in both the seasons. Morgan himself cemented his credentials as a great second baseman with his powerful hitting and fast but intelligent running. Following his retirement, he was an active baseball broadcaster and continued his association with the game he loved. Cause of Death: Peripheral Neuropathy

American Celebrities
Black Sportspersons
Black Baseball Players
American Men
Male Sportspersons
Childhood & Early Life
Joe Morgan was born to Leonard Morgan, a tire and rubber worker, and Ollie Morgan in Bonham, Texas. When he was five, his family moved to Oakland, California, where he spent his childhood. He had a small physique which brought about his nickname, ‘Little Joe’.
He studied at the ‘Castlemont High School’. He began his playing career in 1962 when he joined the ‘Houston Colt .45s’, (which later became ‘Houston Astros’) as a free agent. 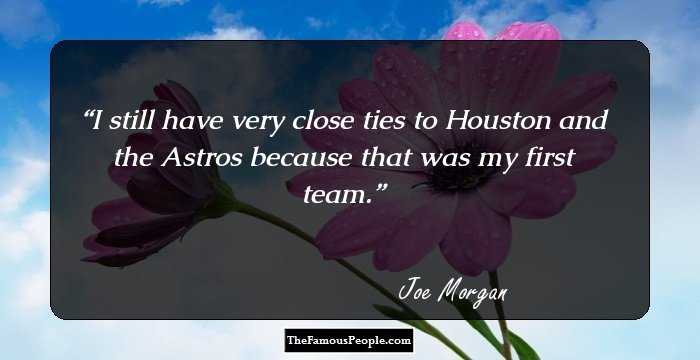 Continue Reading Below
Career
From 1962 to 1971, he played ten seasons for the Astros and built a reputation as a fine player, accumulating 72 home-runs and 219 stolen bases.
Although he played very well for the Astros, the team preferred players with more power. Additionally, Morgan had a few disciplinary issues with the manager Harry Walker. Thus, in 1972, he was transferred to ‘Cincinnati Reds’ as part of a high-profile exchange deal involving 8 players between the two teams.
In his first season of 1972 at the club, he hit .292 with 16 home runs, 73 RBI and 58 stolen bases. The Reds were the ‘National League’ pennant winners and also won the ‘National League Championship Series’, but lost 4-3 to ‘Oakland Athletics’ in the ‘World Series’.
In 1973, Morgan won the ‘National League West division’ with the Reds, but the team lost the pennant by a score of 2-3 to ‘New York Mets’.
The year 1975 was a landmark one for both Morgan and the Reds, as they beat ‘Boston Red Sox’ 4-3 to win the ‘World Series’ after a period of 35 years. Morgan was outstanding throughout and chosen as the ‘National League Most Valuable Player’ for that season.
In 1976, both Morgan and the Reds continued their good form and they won the ‘World Series’ again as they swept aside New York Yankees 4-0. Morgan hit .327 with 17 home runs, 94 RBI, 67 SB and 132 walk and won the MVP award again.
Morgan won the ‘National League West division’ with the Reds in 1979, but lost in the ‘Championship Series’ to ‘Pittsburgh Pirates’. This was Morgan’s last season at the club as he moved to his first club ‘Houston Astros’.
In 1980, Morgan helped a young Astros team win the NL West division, but the team lost the ‘Championship Series’ 2-3 to ‘Philadelphia Phillies’. He moved to ‘San Francisco Giants’ after the season.
From 1981 to 1984, he played two seasons for ‘San Francisco Giants’ and one season each for ‘Philadelphia Phillies’ and ‘Oakland Athletics’, following which he retired.
Continue Reading Below
Post his retirement, he became a Television broadcaster and worked for ‘ABC Sports’, ‘NBC Sports’, ‘ESPN’ and ‘Sports USA’. In 2010, he joined his former team ‘Cincinnati Reds’ as a ‘special advisor to baseball operations’. 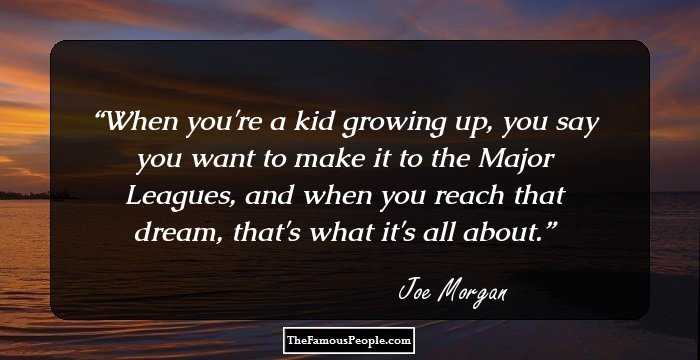 Awards & Achievements
He was a part of the ‘All-Star’ team ten times between 1966 and 1979.
He won the ‘Gold Glove Award’ as a second baseman for five consecutive years, from 1973-1977.
He was the ‘National League Most Valuable Player’ for two consecutive seasons with the ‘Cincinnati Reds’.
In 1987, he was inducted into the ‘Cincinnati Reds Hall of Fame’.
He was inducted into the ‘Baseball Hall of Fame’ in 1990.
Family & Personal Life

Joe Morgan married Gloria Morgan in 1967 and  had two daughters with her - Angela and Lisa. The marriage ended in divorce in 1988.

In 1988, he was detained by police officers at the ‘Los Angeles International Airport’ and was accused of being a drug dealer. After the police let him go, he wasn’t allowed to file a complaint regarding the grievance. However, a lawsuit regarding the issue was settled a few years later when the ‘Los Angeles City Council’ agreed to pay Morgan $796,000.

He married Theresa Morgan in 1990 and fathered two daughters with her - Ashley and Kelly.

In 2015, he was diagnosed with leukemia.

Joe Morgan died on October 11, 2020, at his home in Danville, California. At the time of his death, he was suffering from a non-specified polyneuropathy. 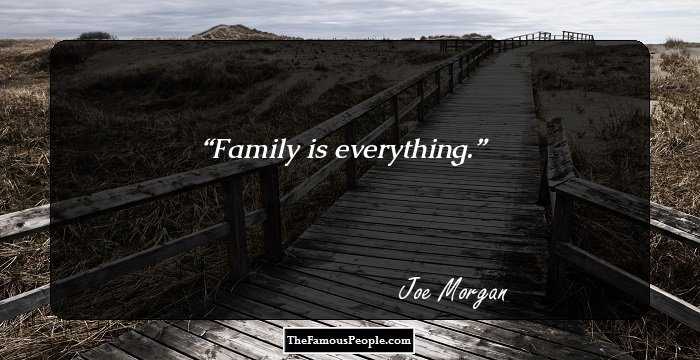 Joe Morgan had a particular movement associated with him which became well-known among the fans. The movement itself was a pumping of his back arm while waiting for the pitch, making it look like a chicken flapping its wings.

See the events in life of Joe Morgan in Chronological Order