Advanced Search
Henry Kissinger is a German-born American political scientist, bureaucrat and diplomat who served America as National Security Advisor and later as Secretary of State under the presidency of Richard Nixon and was awarded the Nobel Peace Prize in 1973. As National Security Advisor and Secretary of States, Kissinger adopted the policy of détente in foreign affairs which improved America's deteriorating relations with the world's two super powers - Soviet Union and China. However, his landmark achievement till this day is a ceasefire with Vietnam which brought an end to the long time war between the two countries for which he was awarded the honorary Nobel Peace Prize in 1973. He was one of the few officials of President Nixon to come out with a clean image from the widely condemned Watergate scandal and despite several accusations and impeachments, has continued to hold important positions in the American Government. At present, Kissinger is Chairman of Kissinger Associates Inc., an international consulting firm. As an author he has published numerous books as well as articles on United States foreign policy. His columns appear in leading American and International newspapers. American People
Diplomats
Political Leaders
American Men
Harvard University
Childhood & Early Life
Henry Kissinger was born on May 27, 1923 in Furth Bavaria, Germany, into a Jewish family. His father Louis Kissinger was a schoolteacher and his mother Paula Kissinger was a homemaker.
In 1938, because of Nazi persecution, his family had to move to London, England, and finally to New York.
After completing high school, he enrolled in the City College of New York, as a part time student. But his studies were interrupted in early 1943, as he had to be drafted into the army.
During the American advance into Germany, Kissinger, though he was only a private, was put in charge of the administration of the city of Krefeld, as there was lack of German speakers on the division’s intelligence staff. He established a civilian administration within eight days, which earned him the rank of sergeant.
Later he was given charge of a team in Hanover to track down Gestapo officers and other saboteurs. For this, he was awarded the Bronze star.
In 1945, he was made commandant of the Bansheim metro CIC detachment, Bergstrasse district of Hesse, for de-Nazification of the area. Despite having absolute authority and powers of arrest, Kissinger took care to avoid abuses against the local population. Next year, he was reassigned to teach at the European Command Intelligence School at Camp King.
He received his BA degree in political science from Harvard College in 1950, and later his MA and PhD from Harvard University in 1951 and 1952 respectively. After finishing his studies, Kissinger remained at Harvard as a member of the faculty in the Department of Government. 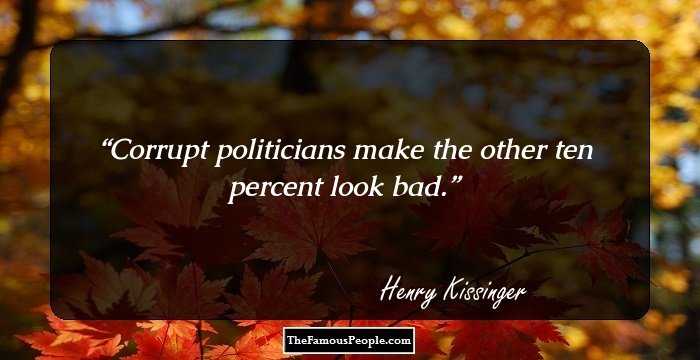 Continue Reading Below
Career
In 1955, he became a consultant to the National Security Council’s Operations Coordination Board, as well as study director in nuclear weapons and foreign policy at the Council on Foreign relations.
Around this time, he also released his book ‘Nuclear Weapons and Foreign Policy’ and worked for the Rockfeller Brothers Fund from 1956 to 1958. Later in 1958, he co-founded the Center for International Affairs with Robert Bowie.
From 1958 to 1971, he served as director of the Harvard Defense Studies Program. He also served as a consultant to several government agencies like the Operations Research Office, Rand Corporation, etc.
Henry Kissinger became an advisor to Nelson Rockfeller and supported his bid for the Republican nomination for president in 1960, 1964 and 1968. Richard Nixon became the president in 1968 following which he appointed Kissinger as the National Security Advisor. Later he was made Secretary of State from 1973 to 1977.
The Vietnam War was the greatest foreign policy trial of Kissinger’s career. He combined diplomatic initiatives and troop withdrawals with devastating bombing campaigns on North Vietnam to improve the American bargaining position and maintain its credibility with the international allies and enemies.
Kissinger and his North Vietnamese negotiating partner Le Duc Tho finally signed a ceasefire agreement on January 27, 1973, which led to both men being awarded the 1973 Nobel Peace Prize. However, to this day, his handling of the Vietnam War still remains a highly controversial subject.
Under his guidance, US government also supported the Bangladesh Liberation War in 1971. It was mainly because of his concern about the increasing influence of the Soviet Union in South Asia.
Though Kissinger is known for improving American relations with its two primary Cold War enemies, China and the Soviet Union, he is criticized for many flaws as well, like for delaying telling President Nixon about the start of the Yom Kippur War in 1973 in order to keep him from interfering.
A few other things he is criticized vehemently for are the bombing of Cambodia, endorsing the Indonesian occupation of East Timor and orchestrating the overthrow of Chilean President Salvador Allende. However, his haters and admirers both agree on one thing, and that is, the current order of the world is mostly a product of Kissinger’s policies.
Continue Reading Below 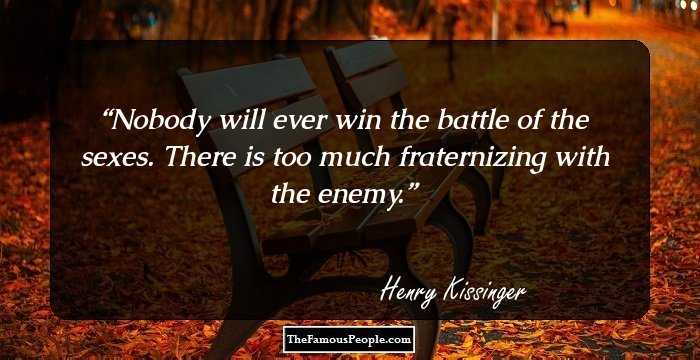 Quotes: Will
Major Works
’Nuclear Weapons and Foreign Policy’ published in 1957, is one of his most important works. This book is about American nuclear weapons policy of the Kennedy Administration as well as about how the American government has conducted war since the World War II.
Henry Kissinger wrote several books, especially on politics. ‘The White House Years’ was one of his best works, as it won him the National Book Award for History. Among the momentous events recounted in the book are his secret negotiations with the North Vietnamese in Paris which helped in putting an end to the Vietnam War. Other topics like the Jordan crisis of 1970, the India-Pakistan war of 1971, his secret trip to China, etc. are all covered in this book.
Awards & Achievements
The Nobel Peace Prize in 1973 was awarded jointly to Henry A. Kissinger and Le Duc Tho in a very controversial move. Le Duc Tho declined the prize while Kissinger accepted it. However, critics alleged that his involvement as Secretary of State in Operation Condor and the US bombing campaign in Cambodia was making a mockery of the prize.
Kissinger was given the US Senator John Heinz Award for Greatest Public Service by an Elected or Appointed Official in 1973. This award is given annually by Jefferson Awards.
He was made an honorary knight of the British Empire in 1995.
Other awards he received in his lifetime were the Woodrow Wilson Award for Public Service in April 2006 and the Hopkins-Nanjing Award in 2007.
In 2012, he received Israel’s President Medal. 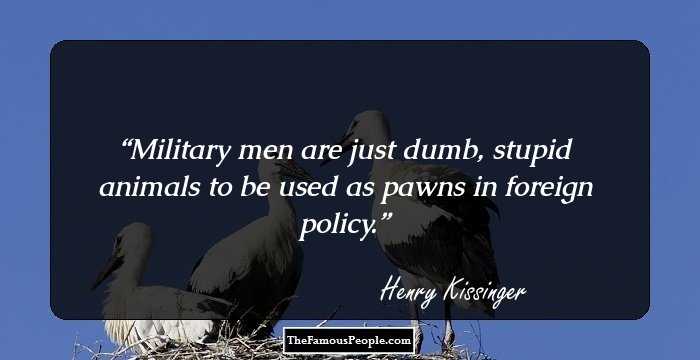 Personal Life & Legacy
Henry Kissinger married Ann Fleischer in 1949. They had two children Elizabeth and David. The couple divorced in 1964.
Ten years after his divorce from Ann, he married Nancy Maginnes. They have been married for more than 40 years now.
Trivia
This American diplomat was the first person to be put on the government’s 9/11 Commission following the September 2001 attacks.
This controversial American Nobel laureate cannot travel to Britain, Brazil and some other countries, as they cannot guarantee his immunity from legal proceedings there.

Quotes By Henry Kissinger | Quote Of The Day | Top 100 Quotes

See the events in life of Henry Kissinger in Chronological Order