Helmut Newton was a fashion photographer who revolutionised fashion photography by his trend-setting body of work. His passion for photography developed very early and he dropped out of school and instead took up a job with famous German photographer Else Simon. But his ambitions suffered a blow as his family had to leave Germany due to the German campaign against Jews and Newton found himself in Singapore. But even here, he pursued his photographic interests, although he did not achieve success. Soon, photography took a backseat as Newton had to serve in the ‘Australian Army’ for five years. But, just as the war got over, after years of being shunted from place to place, Newton finally found himself a free man with freedom to pursue his dreams. He started a photo studio and worked on fashion photography. For the next fifteen years, he built up a reputation for himself and got his big break by landing a job with the ‘French Vogue’, where he accomplished his best work and gained international fame and recognition, as well as notoriety. His style was characterized by bold, sensual and visually arresting portrayals of women shot aesthetically, with impeccable technical details. A visionary, Newton was ahead of his times and his work receives more appreciation today than it did in his lifetime. Gianna Santos
Photographers #15
DID WE MISS SOMEONE?
CLICK HERE AND TELL US
WE'LL MAKE SURE
THEY'RE HERE A.S.A.P
Quick Facts

Australian Celebrities
German Celebrities
German Photographers
Australian Photographers
Scorpio Men
Childhood & Early Life:
Helmut Newton was born as Helmut Neust�dter to Klara and Max Neust�dter in Berlin. His father, a Jew, was a wealthy owner of a factory that manufactured buttons. Helmut studied at the ‘Heinrich-von-Treitschke-Realgymnasium’ and the ‘American School’ in Berlin, from where he was expelled for bad performance.
Helmut’s interest in photography began at the age of twelve, when he obtained his first camera. 1936 onwards, he worked for renowned fashion photographer Else Simon, also known as ‘Yva’.
After the implementation of the Nuremberg Laws, his father had to relinquish the ownership of his factory and was even confined to concentration camp in 1938. The same year, Newton’s parents fled to South America and they managed to arrange for Newton to travel to China. 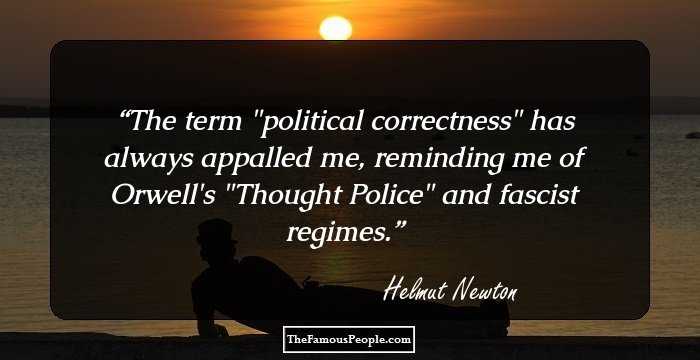 Who Is The Most Popular BTS Member?
Career
En route China, the ship stopped at Singapore where Newton decided to stay on and later found work as a photographer for the newspaper ‘Straits Times’. Just two weeks later, he was sacked from the job. He had a relationship with Josette, a wealthy older woman who paid him well. He also started his own photo studio, ‘Marquis’, but did not achieve any success.
In 1940, he was branded an ‘enemy alien’ by the British authorities and was sent to a camp in Australia. After spending two years at the camp, he was recruited into the ‘Australian Army’ as a truck driver, where he served till the end of World War II.
Following his discharge from the army, he acquired Australian citizenship and changed his last name from Neust�dter to Newton. In 1946, he established a photo studio in Melbourne to work on fashion and theatre photography.
In 1953, he displayed a joint exhibit titled ‘New Visions in Photography’ with another German refugee and photographer, Wolfgang Sievers. The same year, he began a long-running partnership with Henry Talbot, a German Jew.
Having acquired a reputation as a fashion photographer, his photos featured in the Australian supplement of ‘British Vogue’ in 1956. Soon, he secured a one-year contract with ‘British Vogue’ and moved to London, but quit the position a month before the stipulated period and subsequently moved to Paris where he worked for French and German magazines.
He shortly returned to Melbourne but left for Paris again in 1961 despite signing a contract with ‘Australian Vogue’. In Paris, he took up a job with the ‘French Vogue’ where he did his best work. His signature style involved provocative photographs of women taken aesthetically.
Over the years, he stayed in Paris and achieved both considerable fame and notoriety and worked for many other magazines such as ‘Harper’s Bazaar’, ‘Nova’, ‘Queen’, ‘Marie-Claire’, ‘Elle’, ‘Playboy’ and different editions of ‘Vogue’. He also published many series of photographs, most famous among those being ‘White Women’, ‘Sleepless Nights’ and ‘Big Nudes’. 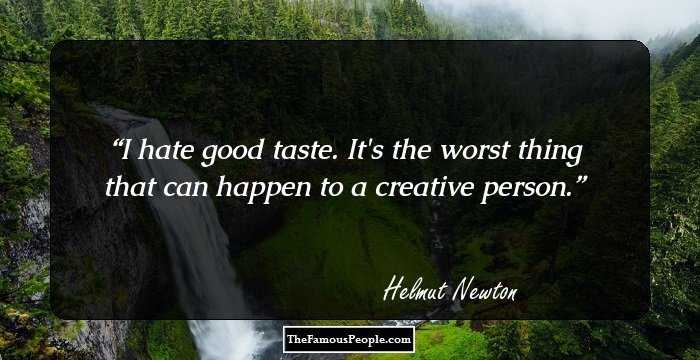 Quotes: I
Major Works
In 1976, he published a series of photographs titled ‘White Women’ which featured nude women with aesthetic poses. The path-breaking photographs set a new trend and changed the way women were portrayed, which also corresponded to the change in women’s roles in Western Society.
Continue Reading Below
In 1981, he published ‘Big Nudes’ to considerable acclaim. These series of photographs featured models in sensual poses outside the studios, often on the streets, which was unconventional. This series cemented Newton’s status as one of the foremost fashion photographers of his time.
Awards & Achievements:
Newton was honoured with Germany’s ‘Kodak Award for Photographic Books’.
In 1976, he was awarded the ‘Best Photography Award’ from the ‘Art Director’s Club’ in Tokyo.
In 1977, he received the ‘American Institute of Graphic Arts Award’.
He was bestowed with the ‘Life Legend Award for Lifetime Achievement in Magazine Photography’ in 1999 by ‘Life Magazine’. 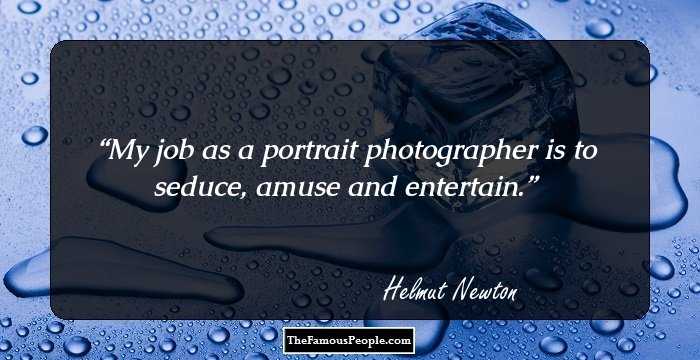 Personal Life & Legacy:
In 1947, while working in his studio in Melbourne, Newton met June Brunell, an Australian model and actress. He started a relationship with her and married her the next year. Jane later became a photographer herself and assisted her husband in many endeavours.
In 1970, he suffered a heart attack in New York and was subsequently hospitalized, after which the rate of his work slowed down considerably.
He passed away in an accident when the car he was driving hit a wall of the ‘Chateau Marmont Hotel’, where he had stayed for a few years.
Trivia:
This famous fashion photographer, who achieved considerable fame, was repeatedly admonished by his father during his childhood for his obsession with women.
You May Like

See the events in life of Helmut Newton in Chronological Order