Haley Reinhart is an American singer who is best known for her cover of Elvis Presley's ‘Can't Help Falling in Love.’ She rose to fame through her performances on ‘American Idol,’ one of the country’s biggest talent shows. Coming from a family where almost everyone is a musician, she was encouraged to pursue her love for music from a young age. Haley first tried her luck in the ninth season of the show ‘American Idol’ but she could not get to the Hollywood round. Undaunted, she auditioned again the next season and finished among the top three finalists. During her time on the show, Haley was known for her ‘sassy’ attitude and for standing up for herself against the judges. She received very harsh comments almost every week and became equally vocal with her ‘sassy’ responses. Her self-esteem and confidence won her several admirers from the celebrity circle including Tom Hanks. She also received lots of votes from the public. After her successful stint at the American Idol, she picked up a contract with the ‘Interscope Records’ and released her debut album ‘Listen Up!’ in May 2012. Later she signed a contract with music publisher Ole and ICM Partners. She is also the very first American Idol contestant to have performed at the ‘Lollapalooza’ feat. American People
Pop Singers
Voice Actresses
Lyricists & Songwriters
American Women
Childhood & Early Life
Haley Elizabeth Reinhart was born on September 9, 1990, in Wheeling, Illinois. Her parents Patti Miller-Reinhart and Harry Reinhart are both musicians and had their own band named ‘Midnight’. Her younger sister Angela is also a singer-songwriter.
Her parents took her to the concerts and made her sing in the chorus when she was just three. Later when she was eight years old, Haley started taking music seriously and joined her parents in their band which covers rock music songs from the 1960s and 1970s.
When she was in middle school, Haley received an award at the end of the year for student ‘Most Likely to Be on American Idol’, because of her determination to make it to the show since her early years.
Haley attended the Mark Twain Elementary School, O.W. Holmes Middle School, and Wheeling High School. She was first exposed to jazz music when she was in high school after she became a part of her school’s vocal group called Midnight Blues. 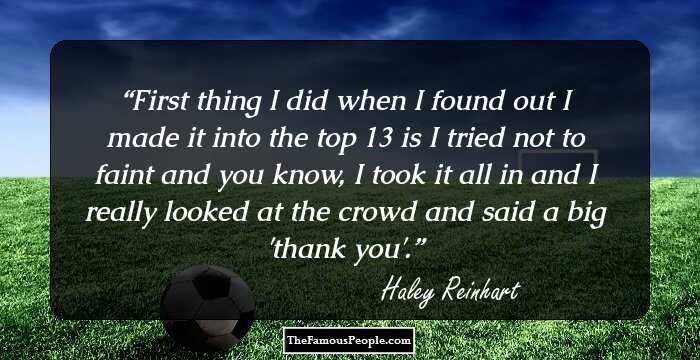 Illinois Musicians
Virgo Singers
Women Singers
Virgo Musicians
Career
In 2010, Haley Reinhart auditioned for the ninth season of the talent reality show, ‘American Idol,’ but unfortunately she could not go past the judge’s rounds and was unable to advance to the Hollywood round. However, she came back again for the next season’s audition and was selected. She sang two songs, Alicia Keys's ‘Fallin’ and The Beatles' ‘Oh! Darling’, of which only the latter was broadcast on television.
Throughout her ‘American Idol’ journey, Haley impressed the audiences and often the judges with her singing. She sang many memorable covers including ‘Breathless’ by Corinne Bailey Rae, ‘God Bless the Child’, ‘The Long and Winding Road’ by The Beatles, and ‘House of the Rising Sun’ during her stint on the show.
She earned a lot of praise from both the judges and the audiences for her melodious voice. However, Haley was also criticized several times by the judges for her imperfect stage presence and her choice of songs. Despite the criticism, she stuck with her ‘originality’ and continued performing every week with the same élan.
After her ‘American Idol’ days, Haley signed with the Interscope Records in 2011 and released her debut album. Later that year Haley teamed up with her fellow ‘American Idol’ contestants Scotty McCreery, Lauren Alaina, and James Durbin to release a Walmart Exclusive EP, featuring her highlights from the show.
Some of her most popular tracks like ‘House of the Rising Sun’, ‘Bennie and the Jets’ and the previously unreleased recording of ‘You Oughta Know’ were included on that EP. It debuted at #37 on the ‘Billboard 200’ and sold over 14,000 copies.
In 2015, Haley Reinhart earned her share of fame after performing with Scott Bradlee's band Postmodern Jukebox. She did a Jazz cover of Radiohead's ‘Creep’ with the band which went on to spend 58 consecutive weeks on Billboard's Jazz digital charts. She was widely praised for that cover and was critically acclaimed.
Later she did a cover of Elvis Presley's ‘Can't Help Falling in Love’, which was eventually used in a commercial and quickly became viral. The cover ranked at #16 on the ‘US Adult Contemporary’ chart and was also certified Gold by the ‘Recording Industry Association of America’.
Her second studio album titled ‘Better’ was released on April 29, 2016. The album ranked at #22 on ‘Billboard's Independent Albums’ chart. The title track became the biggest hit from the album.
In September 2017, she released her third studio album titled ‘What's That Sound?’ The album had several popular songs including the lead single ‘Baby It's You’, ‘The Letter’ and ‘For What It's Worth’. 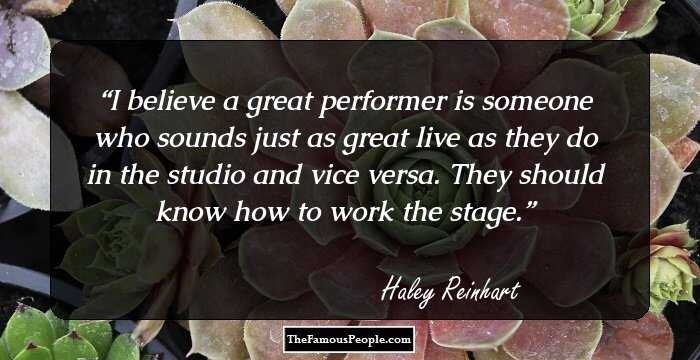 Women Musicians
Virgo Pop Singers
American Singers
Female Pop Singers
Major Works
Haley Reinhart saw her fortunes turn for the better during her ‘American Idol’ days. After failing to qualify for the main rounds in season nine, she auditioned again the subsequent year and eventually achieved a top three spot before exiting the show. She earned a lot of support from numerous celebrities and her ‘sassy’ attitude was praised by many.
During her time on the show, she was branded an ‘original’ personality as she kept challenging the judges’ harsh comments on her stage presence and her choice of songs. Celebrities like Lady Gaga, Jimmy Page, Kelly Clarkson, Tom Hanks, Kris Allen, and Ellen DeGeneres came to her support. They picked Haley as their favorite season ten contestant. Robert Plant and Jimmy Page contacted the producers of the show to offer her the opportunity to sing a Led Zeppelin song for Top 3 week.
Recommended Lists:

American Musicians
American Pop Singers
Female Voice Actresses
American Women Singers
Personal Life
Haley Reinhart has been involved in many philanthropic works since her American Idol days. She participated in VH1's ‘Do Something Awards’ and then started working with ‘Habitat for Humanity’ as well as ‘Starkey Hearing Foundation’.
In July 2017, Haley was arrested for battery after she allegedly punched a ‘Lamplighter Inn’ bouncer in Palatine. However, her lawyer stated that it was the bouncers of that inn who had attacked Haley and her friends, one of whom suffered serious injuries including a concussion.
On August 11, 2017, bouncer Adam Sobanski was indicted on two counts of aggravated battery after a video surfaced which clearly showed Sobanski choking Haley’s friend Chislof. 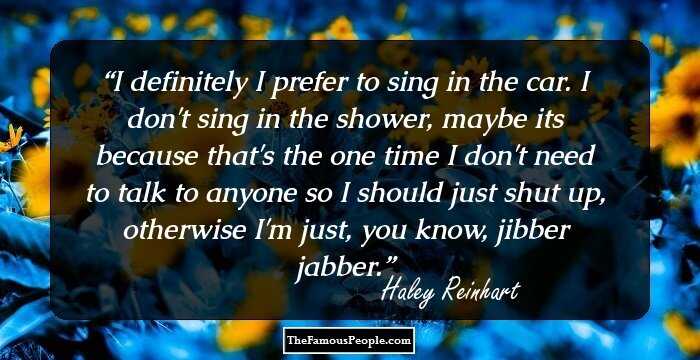 Quotes By Haley Reinhart | Quote Of The Day | Top 100 Quotes

See the events in life of Haley Reinhart in Chronological Order