(Model, Actress and One of the 100 Greatest Women of Rock and Roll by VH1 in 1999)
Advanced Search

Beverly Grace Jones is a Jamaican singer and actress who was nominated for the Saturn Awards for Best Supporting Actress for her role ‘Conan the Destroyer’, ‘A View to a Kill’, and ‘Vamp’. She is also a Grammy Award nominated musician. A bold girl from an early age, she moved to Philadelphia with a drama professor to work in a play when she was in college. She moved to Paris and joined the fashion industry. The fact that she was not a conventional beauty did not deter the young woman from pursuing a modeling career. Thankfully, the fashion scene in Paris was open towards welcoming her unconventional androgynous looks, dark skin and bony structure into a world dominated by curvy, feminine, and pretty women. She modeled successfully for the likes of Yves St. Laurent, Claude Montata and Kenzo Takada. As a model she was also on the constant lookout for acting opportunities and appeared in a string of low budget movies. The talented woman is a skilled musician who was a part of the ‘New Wave’ movement in the late 1970s. Some of her hit singles include ‘Pull Up to the Bumper’, ‘I’ve Seen That Face Before’, and ‘Slave to the Rhythm’. American People
Actresses
Black Models
Black Fashion
Black Singers
Childhood & Early Life
She was born to Marjorie and Robert Jones at Spanish Town, Jamaica. Her father was a politician and Apostolic clergyman. She was brought up in Jamaica by her grandparents while her parents worked in the United States.
She was a shy and skinny child and was often teased by her classmates. She found solace in sports in which she excelled.
She moved to New York when she was 13 and joined the Syracuse University after completing her schooling. She was studying Spanish. However, she dropped out of college halfway to accompany a drama professor to Philadelphia to work with him on a play. 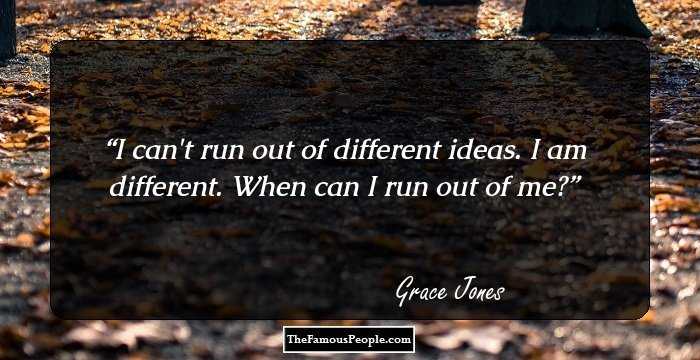 Famous Beautiful Women With Green Eyes
Career
She signed with the Wilhelmina Modelling agency when she was 18. She was dark skinned and had androgynous features—her unconventional looks ensured that she got ample opportunities to work with the likes of Yves St. Laurent, Claude Montana, and Kenzo Takada.
She released a number of singles during 1975-76 though none of them were big successes. In 1977 her debt album, ‘Portfolio’ was released, it contained her first big hit single, ‘La Vie en rose’.
The success of her first album prompted her to release her next album in quick succession. ‘Fame’ was out in 1978. The album’s lead single was ‘Do or Die’ became a huge club hit on the U.S. and Canadian dance charts.
In 1979 she released the album ‘Muse’. The first side of the album contained a continuous medley of four songs and a narrative about someone who has sinned; the second side had disco songs.
The most successful album of her career, ‘Nightclubbing’ was out in 1981. It spawned the hits ‘Pull Up to the Bumper’ and ‘I've Seen That Face Before (Libertango)’.
After the success of her previous album, she brought out in quick succession ‘Living My Life’ in 1982. It was a commercial success and reached Top 20 in several countries.
After playing minor roles in low budget movies for so long, she landed her first substantial role as Zula in ‘Conan the Destroyer’ in 1984. It starred Arnold Schwarzenegger and was a big international success.
She appeared as May Day in the James Bond film ‘A View to a Kill’ in 1985. The movie was a commercial success though it did not receive favourable reviews.
Her 1985 album ‘Slave to the Rhythm’ was a concept album with music ranging from funk, R&B, and go-go beats. It was commercially a very big success and performed really well in German speaking countries.
She made her first foray into production with her album ‘Inside Story’ in 1986. She explored several elements of jazz, gospel and Caribbean sounds in the album. All the songs were written by Grace Jones and Bruce Woolley.
She did not release any album during the 1990s. After a period of almost 20 years her album ‘Hurricane’ was out in 2008. It included a number of autobiographical songs including ‘This Is’, ‘William’s Blood’, and ‘Love You to Life’.
Major Works
Her album ‘Nightclubbing’ was her career breakthrough and the biggest commercial hit. It had reggae-oriented re-interpretations of the songs by Flash and the Pan, Bill Withers, Iggy Pop and Astor Piazzolla. The album appeared on the Top 5 charts in at least four countries
Awards & Achievements
She was nominated for the Saturn Awards for Best Supporting Actress thrice: Conan the Destroyer (1984), A View to a Kill (1985), and ‘Vamp’ (1986).
Personal Life & Legacy
She was in a relationship with her long-term collaborator, Jean-Paul Goude, with whom she has a son. She is also a grandmother through this son.
She was once married to producer Chris Stanley and Atila Altaunbay. She has also been romantically involved with several other men.
Recommended Lists:
Film & Theater Personalities #3972
Fashion #360
You May Like

See the events in life of Grace Jones in Chronological Order