Advanced Search
Goldie Hawn is an iconic Academy Award Award actress and producer who has worked in the American film industry for more than three decades, entertaining her audience with her theatrics and artistic antics. Often touted as one of the most bankable stars of the 20th century, Hawn belted out hits after hits, mastering all genres, be it comedy, satire or drama. As for her career graph, Hawn has had her share of downfalls, but every time, she managed to rise like a phoenix to outshine her peers and emerge as the ‘It’ girl, a tag she earned after starring in the career-transforming sketch comedy series, ‘Rowan & Martin’s Laugh-In’. The show not just brought her international stardom and fanfare but also acted as a catalyst for her career in films. Interestingly, Hawn did not cling to the camera. She twice took sabbaticals, in 1970s and 1990s, but each time she re-emerged with renewed force and energy. Her body of work includes some of the biggest box office blockbusters like ‘Cactus Flow’ for which she won both an Academy and a Golden Globe Award, ‘Foul Play’, ‘Seems Like Old Times’, ‘The First Wives Club’ and so on. For her role in ‘Private Benjamin’, she got an Academy Award nomination for Best Actress. In 2002, Hawn retired from big screen only to re-emerge 15 years later with the film, ‘Snatched’. Apart from acting, she has also produced several films and has also directed a television special. American People
American Women
Scorpio Actresses
American Actresses
Actresses Who Are In Their 70s
Childhood & Early Life
Goldie Hawn was born on November 21, 1945, in Washington D.C, to Laura and Edward Rutledge Hawn. Her father was a musician in a band and her mother owned a jewellery shop and a dance school. Her elder sister, Patti Hawn, works as an entertainment publicist. Her parents also had a son who died in infancy.
Hawn’s parents had mixed ancestry. Her father was a Presbyterian of German and English lineage, and her mother was Jewish. Young Hawn spent much of her early years in Takoma Park, Maryland.
She attended Montgomery Blair High School in Silver Spring, Maryland. Since the age of three, Hawn trained in ballet and tap dancing. When she was 10, she danced in the corps de ballet of the Ballet Russe de Monte Carlo production of The Nutcracker.
Hawn was bitten by the acting bug when she was young. To pursue a career in acting, she enrolled at the American University, majoring in drama. However, Hawn did not complete her degree and dropped out of the university. 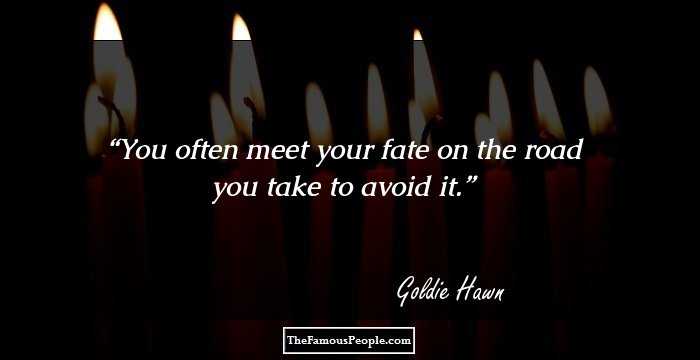 Quotes: You
Continue Reading Below
Career
1964 proved to be a significant year for Hawn’s acting career. With no degree to hold back on to, she started teaching ballet for a source of income. Same year, she made her stage debut, playing protagonist Juliet in Virginia Shakespeare Festival production of ‘Romeo and Juliet’.
In 1964, Hawn also debuted as a professional dancer in the musical, ‘Can-Can’ at the New York World's Fair. A year later, she worked as a professional dancer, appearing as a go-go dancer in New York City and at the Peppermint Box in New Jersey.
Towards the latter half of the 1960s, Hawn moved to California for a dance gig. Meanwhile, she also began her acting career by playing the role of a ‘dumb blonde girlfriend’ in CBS’s sitcom ‘Good Morning, World’.
After her fleeting debut, Hawn finally gained international stardom when she was cast as a series regular in the sketch comedy, ‘Rowan & Martin’s Laugh-In’. Lasting until 1973, the show depicted Hawn as a chirpy girl best known for her verve and cheerfulness. Having said that, Hawn got to show a full range of emotions as her character would be giggling at one moment and become composed at the other! Her bikini body also attracted attention, making her the ‘It’ girl of the 1960s.
‘Laugh In’ opened the gateway to the big screen debut for Hawn. She played the role of a bubbly dancer in the 1968 movie, ‘The One and Only, Genuine, Original Family Band’.
By the beginning of the 1970s, Hawn’s ‘Laugh In’ character found her many more film roles. In 1969, she exhibited the same chirpiness and verve in the film ‘Cactus Flower’. It was her first full-fledged movie role, and earned her an Academy Award for Best Supporting Actress.
Post the phenomenal success of ‘Cactus Flower’, there was no looking back for Hawn who gave hits one after the other. She next starred in ‘There’s a Girl in My Soup’, ‘$’ and ‘Butterflies are Free’.
After proving herself in a string of successful comedies, Hawn tried her hand at drama. Between 1974 and 1975, three of Hawn’s satirical dramas hit the box office, including ‘The Girl from Petrovka,’ ‘The Sugarland Express’, and ‘Shampoo’. In 1976, she was seen in ‘The Duchess and the Dirtwater Fox’.
After 1976, Hawn took two years of sabbatical from films. Renewing her passion for acting, she made a comeback in 1978, hosting television special, ‘The Goldie Hawn Special’. Despite her two year break from camera, Hawn was magical as a host. The show was a super hit, and earned a Primetime Emmy nomination.
Continue Reading Below
Following the spectacular success of ‘The Goldie Hawn Special’, Hawn cemented her position further with the film, ‘Foul Play’. The film was a box office blockbuster, reviving Hawn’s film career.
In 1972, Hawn tried her hand at singing; she recorded and released a solo country LP, ‘Goldie’, for Warner Brothers. The album received positive reviews from both critics and audience.
In 1980, she starred in the primetime variety special, ‘Goldie and Liza Together’. The show was a massive hit, garnering four prestigious Emmy nominations. In the same year, she was seen in the comedy, ‘Private Benjamin’ which she co-produced as well. The movie was highly successful and people adored Hawn’s acting abilities. Her brilliance in the role can be gauged by the fact that it earned her, her second Academy nomination in the best actress category.
Hawn’s brush with success and fame continued as she delivered hits after hits. Some of the successful box office blockbusters that she starred in include comedies ‘Seems Like Old Times’, ‘Protocol’ and ‘Wildcats’ and dramas ‘Best Friends’ and ‘Swing Shift’. Hawn ended the 1980s decade with the movie ‘Overboard’
The decade of 1990s was a mixed bag for Hawn. She had some commercially successful films like ‘Deceived’, ‘CrissCross’ and ‘Death Becomes Her’ and critically panned one like ‘Bird on a Wire’.
Hawn took a hiatus from films in the initial years of 1990s to care for her mother before returning as a film producer of the satirical comedy, ‘Something to Talk About’. Around 1997, she made her directorial debut with the television film, ‘Hope’ starring Christine Lahti and Jena Malone.
In 1996, Hawn came back to face the camera for the super successful and critically acclaimed film, ‘The First Wives Club’. Her portrayal of an aging, alcoholic character Elise Elliot was to the point. Same year saw the release of yet another super hit musical ‘Everyone Says I Love You’.
Hawn’s career took a hit when ‘The Out-of-Towners’ and ‘Town & Country’ flopped. The 2002 film, ‘The Banger Sisters’ was her last film for more than a decade and a half.
In 2017, Hawn came out of her 15 years long hiatus to star in the comedy, ‘Snatched’, playing mother to Amy Schumer’s character. 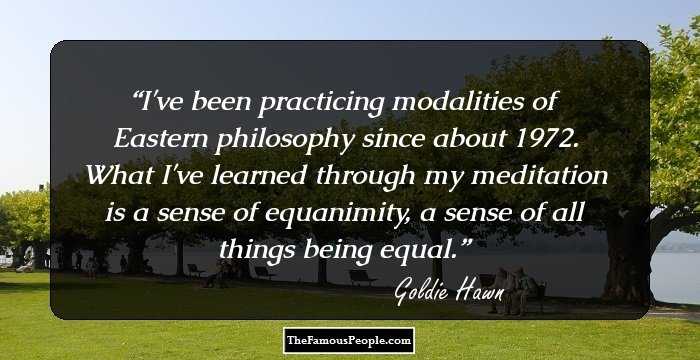 Major Works
The magnum opus of Goldie Hawn’s career was also supposedly the breakthrough film of her career - ‘Cactus Flower’. Released in 1969, the film was phenomenally successful and brought a lot of appreciation, adulation and admiration for young Hawn. Despite playing a supporting role in the film, her performance was lauded for its credibility and finesse. She also bagged the prestigious Academy Award and Golden Globe Award for Best Supporting Actress.
Personal Life & Legacy
Goldie Hawn has been involved in a lot of love relationships all through her life. She first married a dancer turned director, Gus Trikonis, in May 1969, in Honolulu, Hawaii. However, the relationship did not last long and they separated in April 1973. They legally divorced in 1975.
Post separation from Trikonis, Hawn was involved with a number of men, including Ted Grossman, Bruno Wintzell and Italian actor Franco Nero. She then got engaged to musician Bill Hudson of Hudson Brothers fame. The two tied the knot in July 1976. They were blessed with two children, a son Oliver and a daughter Kate, who is also a popular Hollywood actress. Hawn and Hudson’s marriage hit the rocks in August 1980.
Hawn was also romantically linked to French actor Yves Rénier, television star Tom Selleck and Moroccan businessman Victor Drai. Since 1983 Valentine’s Day, Hawn is in a relationship with actor Kurt Russell. They have a son, Wyatt. In 2018, the couple celebrated 35 years of togetherness.
Apart fromcacting, Hawn is extremely involved in charitable work. In 2003, she founded the NGO, Hawn Foundation that aims at providing youth education programs to improve academic performance of young people. 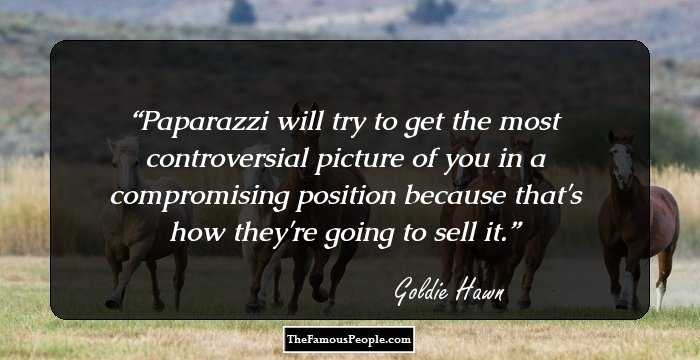 Quotes By Goldie Hawn | Quote Of The Day | Top 100 Quotes

See the events in life of Goldie Hawn in Chronological Order 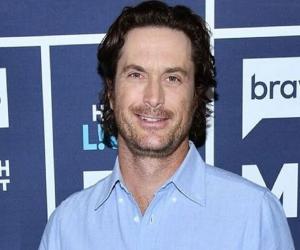