Georges-Pierre Seurat was a Neo-impressionist painter from France. He was a pioneer of the post-impressionist movement in art. He is credited as the founder of painting techniques like 'chromoluminarism' and 'Pointillism.' He used tiny brushstrokes of pure color side by side to capture the effects of light in his paintings. He was inspired by the scientific ideas of color form and expression, and intrigued by how the usage of elements of light brought out the vividness as opposed to just mixing colors directly on the canvas. His style of painting inspired many artists like Paul Signac, Henri-Edmond Cross, Maximilien Luce. His most famous works include 'A Sunday Afternoon on the Island of La Grande Jatte,' 'Bathers at Asnières,' 'La Seine à la Grande-Jatte,' and 'Jeune femme se poudrant.' His Conté crayon drawings, wherein he used a mixture of wax and charcoal or graphite, are also critically acclaimed. His works also greatly influenced Cubic artists in the 1900s. Paul Signac
DID WE MISS SOMEONE?
CLICK HERE AND TELL US
WE'LL MAKE SURE
THEY'RE HERE A.S.A.P
Quick Facts

French People
Male Artists & Painters
Sagittarius Artists & Painters
Sagittarius Men
Childhood & Early Life
Georges Seurat was born in Paris on 2 December 1859. His family moved from his birthplace at 60 rue de Bondy, present-day rue René Boulanger, to 136 boulevard de Magenta in 1862 or 1863.
His father was Antoine Chrysostome Seurat. He was associated with the legal department and became rich by investing in real estate. He hailed from the Champagne region of France, while his mother, Ernestine Faivre, was from Paris.
He had two older siblings, a brother, Émile Augustin, and a sister, Marie-Berthe. They were primarily raised by their mother because their father lived in Le Raincy and he visited his family once a week.
He started painting and drawing as a boy, but his formal education in art began in 1875 when he was enrolled in 'École Municipale de Sculpture et Dessin' under the tutelage of sculptor Justin Lequien.
Continue Reading Below
Career
In 1878, Georges-Pierre Seurat went to study at 'École des Beaux-Arts in Paris' and was trained by Henri Lehman. The teaching methods practiced in the school were traditional, and he was drawing from old sculptures or imitating works done by other artists.
In November 1879, he left the École des Beaux-Arts Seurat's and joined the Brest Military Academy for a year. Upon his return to Paris, he lived in a studio apartment with his friend, Aman-Jean, and focused on perfecting the art of monochrome drawing.
In 1883, he exhibited his first drawing, a Conté crayon drawing of Aman-Jean, in the famous Paris Salon. He, in particular, studied the use of color in the works of Eugène Delacroix.
His first major art piece was 'Bathers at Asnières' which he painted in 1883. It was made on a large canvas and depicted young men relaxing by the Seine River in Paris.
His painting showed influences of Impressionism with the use of color and light tone; however, it also was smooth and carefully structured, reflecting what he learned in art school. Critic Paul Alexis called it a "faux Puvis de Chavannes."
The Paris Salon refused to acknowledge 'Bathers at Asnières' and in May 1884, he showcased it to 'Groupe des Artistes Indépendants.' Soon after, the group was dissolved.
Seurat, with other like-minded artists like Henri-Edmond Cross, Charles Angrand, Albert Dubois-Pillet, and Paul Signac, formed a new organization called 'Société des Artistes Indépendants.'
Seurat was greatly influenced by the works of Puvis de Chavannes, Michel- Eugène Chevreul, Ogden Rood, and Charles Blanc. He studied theories on color and light and experimented with three primary colors, red, yellow, blue, and their complements.
He revered Paul Signac and became his student, and painted many practice paintings to prepare for the famous 'A Sunday on La Grande Jatte—1884'. Seurat also showed the 'Baignade' at the 'Société des Artistes Indépendents' which shaped the perception of modern art.
Continue Reading Below
Along with Paul Signac, he discovered the technique of painting in small dot-like brush strokes to create a picture. He believed in the harmonic blend of colors, which could be achieved by using "optical mixing" by placing pure colors side by side rather than mixing in the palette. This was initially harshly criticized and called "Pointillism," but now denotes a critical technique of painting among Neo-impressionists.
He has also been credited for the idea of divisionism, also known as 'chromoluminarism.' The method is similar to that of "Pointillism" but can be distinguished by cube-like brushstrokes that emphasize the separation of colors to create maximum luminescence in the image.
He started working on 'A Sunday Afternoon on the Island of La Grande Jatte' in the summer of 1884. It portrays how the members of different social classes engage in various activities along the banks of the Seine River. Even though it is limited in detail, the brushwork is seen to be vivid and engaging.
The painting was ten feet wide and it took him two years to complete it. He prepared for it by sitting in the park and making rough sketches, which are now at the Art Institute of Chicago.
He also painted a smaller version of the same, which is now housed in the Metropolitan Museum of Art in New York.
Among his other paintings on female subjects are "The Models" in 1887-88 and "Young Woman Powdering Herself" in 1888-89.
Some of his other works depict scenes from the Parisian nightlife of the late 1800s. He also painted scenes from circuses like "Circus Sideshow" in 1887-88 and "Le Chahut" in 1889-90.
He painted several images of the Normandy coast and made other black and white drawings in the “Conté crayon” style by combining wax and charcoal.
Family & Personal Life
Georges Seurat was guarded about his personal life. He was in a relationship with Madeleine Knobloch. She was his muse and inspiration for "Jeune femme se poudrant" aka "Young Woman Powdering Herself."
They lived together in his studio apartment on 128 bis Boulevard de Clichy around 1889. They moved to 39 passage de l'Élysée-des-Beaux-Arts (now rue André Antoine) when Madeleine was pregnant, and their son Pierre-Georges was born on 16 February 1890.
In his last year, he made four canvas paintings, including "The Channel of Gravelines" and "Petit Fort Philippe."
On 29 March 1891, he passed away at his parents' house at the age of 31. The reason of his death remains uncertain. Various sources suggest meningitis, pneumonia, infectious angina, or diphtheria as the cause. His son also acquired the same disease and died two weeks later. At that time, Madeline was pregnant with their second child, who unfortunately died soon after birth.
"This Circus" was his last painting, which remained incomplete. It is kept in the museum 'Musée d'Orsay' in Paris. His funeral service was held on 30 March 1891, in Saint-Vincent-de-Paul church. He was buried at Cimetière du Père-Lachaise on 31 March 1891.

See the events in life of Georges Seurat in Chronological Order 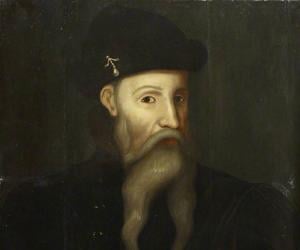