George Harvey Strait Sr. is an American country music singer. He is popularly referred to as the “King of Country” by his fans. In addition to being a singer, he is also an actor and music producer whose talents are recognized by followers and critics alike. He is famous for being true to traditional country music while developing his own unique style of bar-room ballads, western swing, and honky-tonk style music. He discovered his interest in rock and roll music when he was in high school, post which he started a garage band. He would attend live performances of country music that were often held in Texan towns. Subsequently, he became interested in country music. He lists Lefty Frizzel, Hank Williams, Merle Haggard, and George Jones as his biggest influences. His music career began when he was serving in the ‘US Army.’ While he was stationed in Hawaii, he started performing with an army-sponsored band called ‘Rambling Country’ which played under the name ‘Santee’ while performing off-base. After his army days, he joined the country band ‘Stoney Ridge’ which he renamed as ‘Ace in the Hole’ when he became the lead. His band performed at several honky-tonks and bars around Texas, and soon gained an impressive fan following. As of today, he has sold more than 70 million albums in the US and holds the world record for having the maximum number-one hit singles in the history of music. American People
Lyricists & Songwriters
American Men
Texas Musicians
Male Singers
Childhood & Early Life
George Strait was born on May 18, 1952, in Texas, USA, to John Strait, a school teacher, and his wife Doris Couser. He had two siblings. His father owned a 2000-acre cattle ranch where the family worked during the weekends.
His parents divorced when he was young. His mother moved along with his sister, leaving behind George and his brother to be raised by their father.
He attended ‘Pearsall High School’ where he played in a rock and roll garage band. His interest soon shifted to country music, which was often performed live in Texas.
He enlisted in the ‘US Army’ in 1971. After being honorably discharged from the army, he attended ‘Southwest Texas State University’ from where he received a degree in agriculture. 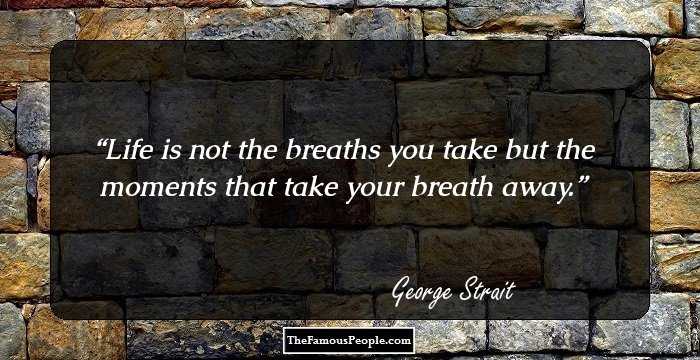 Who Is The Most Popular BTS Member?
Career
While serving in the army he was stationed at Hawaii where he began performing with an army sponsored band named ‘Rambling Country’ which also performed off-base under the name ‘Santee.’
Later on, while pursuing his college degree, he joined the country band ‘Stoney Ridge’ as a vocalist. He soon became the leader of the band and renamed it as ‘Ace in the Hole.’
His band performed all around south and central Texas and gained local followers. Soon, Strait got the opportunity to record many of the songs he had written, but these songs could not achieve wide recognition.
After years of struggle, Strait finally signed a solo contract with ‘MCA Records’ in 1981 with the help of his friend Erv Woolsey. In the same year, he released his first single ‘Unwound’ which became one of the top ten ‘Hot Country Songs.’ The song was included in his debut album ‘Strait Country.’
In the following decade, he recorded 17 subsequent No.1’s, including ‘Strait from the Heart’ (1982), ‘Does Fort Worth Ever Cross Your Mind’ (1984), ‘Something Special’ (1985), ‘Ocean Front Property’ (1987), and ‘Beyond the Blue Neon’ (1989).
His tenth studio album ‘Livin' It Up’ was released in 1990, and featured two number one hits. He followed it up with ‘Chill of an Early Fall’ in 1991 and ‘Holding My Own’ in 1992.
In 1992, he made his acting debut with ‘Pure Country,’ a western musical film directed by Christopher Cain. The film was a big box office flop, though the soundtrack was a critical hit.
In the same decade, he released many other noteworthy albums, including ‘Easy Come, Easy Go’ (1993), ‘Blue Clear Sky’ (1996), ‘Carrying Your Love With Me’ (1997), and ‘One Step At a Time’ (1998).
In 2000, he released a self-titled album, and followed it up with the critically acclaimed album ‘The Road Less Traveled’ in 2001.
Continue Reading Below
The year 2006 marked Strait’s 30th year in the music industry which he celebrated with the release of a new album titled ‘It Just Comes Natural’ which featured 15 new songs. His other albums over the years include ‘Troubadour’ (2008), ‘Twang’ (2009), and ‘Here for a Good Time’ (2011).
Strait’s single ‘Give It All We Got Tonight’ from his album ‘Love Is Everything’ released in 2013.
In the late-2010s, he released albums, such as ‘Cold Beer Conversation’ (2015) and ‘Honky Tonk Time Machine’ (2019). Both the albums met with positive reviews, and became average hits in comparison to its predecessors.
In January 2013, Strait went on his last tour ‘Cowboy Rides Away Tour,’ which was divided into two legs. The tour had many prominent singers featuring as opening performers. It also set a record for the largest gross at a single-show country concert. 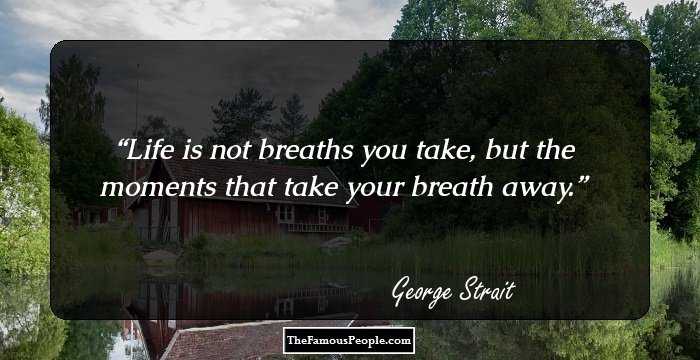 Quotes: You, Life
Major Works
His debut album ‘Strait Country’ (1981), which catapulted him to fame, was certified platinum by the ‘Recording Industry Association of America’ (RIAA).
His 1987 album ‘Ocean Front Property’ is a multi-platinum album. It was his first album to debut at No.1 on the ‘Billboard Top Country Albums Chart.’
Having sold over six million copies, the album ‘Pure Country,’ which served as the soundtrack of the 1992 movie of the same name, is Strait’s biggest commercial success till date. It includes songs like ‘I Cross My Heart’ and ‘Heartland.’
‘Strait Out of the Box’ (1995) is his highest certified multi-platinum album, which sold more than eight million copies. It is a box set that includes many of his hit singles, dating from 1976 to 1995.
Continue Reading Below
His 2008 album ‘Troubadour’ is considered to be one of his best works as it earned him the ‘Grammy Award’ for ‘Best Country Album.’ It includes songs like ‘It was me,’ ‘Rivers of Love,’ and ‘I Saw God today.’
Awards & Achievements
He holds the record for the most number of No.1 albums, gold albums, platinum albums, and multi-platinum albums in the history of country music.
He has produced a top ten hit every year for 30 consecutive years — a world record in the history of music.
In 2006, he was inducted into the ‘Country Music Hall of Fame,’ where he performed his then-latest hit ‘Give It Away.’
He won his first ‘Grammy,’ the ‘Grammy Award’ for ‘Best Country Album’ for his 2008 album ‘Troubadour.’ The single ‘I Saw God Today’ was his highest-debuting single ever.
He was named ‘Artist of the Decade for the 2000s’ by the ‘Academy of Country Music’ in 2009. He received the award from the previous winner Garth Brooks. 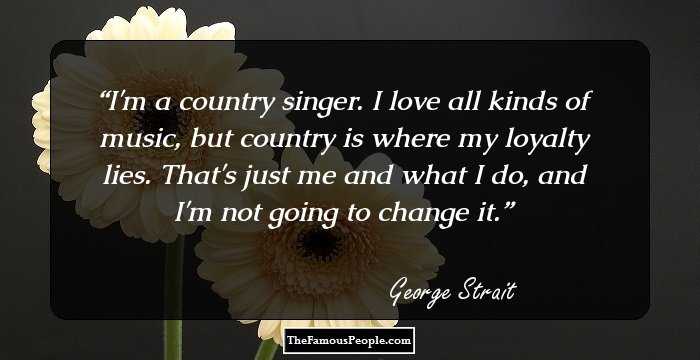 Quotes: Me, Love, Change, Music, I
Personal Life & Legacy
He married his high school sweetheart Norma in 1971. The couple had two children, a daughter and a son. He became a grandfather in 2012.
His daughter Jenifer died in an accident at the age of 13. Strait and his wife set up ‘The Jenifer Lynn Strait Foundation’ in her memory. The foundation donates money to children’s charities.
Along with his friend Tom Cusick, Strait created ‘Vaqueros Del Mar (Cowboys of the Sea) Invitational Golf Tournament and Concert’ to raise money for David Feherty’s ‘Troops First Foundation.’ The foundation benefits wounded servicemen, servicewomen, and their families.
He was also named ‘Texan of the Year’ in 2018 by ‘Texas Legislative Conference.’
Trivia
He enjoys various outdoor activities like hunting, fishing, playing golf, riding motorcycles, etc.
He and his son are both members of the ‘Professional Rodeo Cowboys Association’ (PRCA).
He is associated with the ‘Wrangler National Patriot’ program, a campaign that raises awareness and funds for America’s wounded and fallen military veterans and their families.

Quotes By George Strait | Quote Of The Day | Top 100 Quotes

See the events in life of George Strait in Chronological Order