Rising from a life of sin to become one of the world’s most revered Christian evangelists, George Muller was a true son of God. With nothing but his faith in Jesus Christ, he set upon himself the task of establishing orphanages for providing care and education for thousands of orphans. His initial work with orphans started when he and his wife started taking in orphaned girls into their rented house. Gradually their work expanded and soon they were managing three homes, not just for orphaned girls, but also for boys and smaller children. As the population of orphans grew, neighbors began to complain about the noise and Muller decided to establish separate buildings for the orphanages. He had a very deep faith in God and prayed to the almighty to give him the funds for accomplishing this aim. Miraculously, he never fell short of funds or found himself in debt. People always offered him unsolicited donations in form of money or in kind, and he and his orphans never felt themselves missing any necessity such as food or clothing. A devout Christian he frequently read the Bible and encouraged the children to do so. He was a preacher by profession and had traveled all over the world during the course of his missionary tours. Bill Nelson
DID WE MISS SOMEONE?
CLICK HERE AND TELL US
WE'LL MAKE SURE
THEY'RE HERE A.S.A.P
Quick Facts

Founder/Co-Founder: The Scriptural Knowledge Institution for Home and Abroad

George Muller was born in a village in the Kingdom of Prussia. His father was a collector of taxes. He lost his mother when he was just 14 years old.

As a teenager he acquired the bad habits of lying, stealing and drinking. In fact he was out with his friends indulging in his vices while his mother was dying. He lacked a conscience and stole government money from his father.
His father sent him to the cathedral classical school at Halberstadt so that he could study to become a clergyman, a lucrative profession during those times. Later on he went to the University of Halle to study divinity. There he started attending Christian prayer meetings and began reading the Bible regularly.
After having realized the power of God and prayer, he left behind his life of sin and asked God to help him in his life. He now sincerely wanted to become a missionary and began preaching in nearby churches. 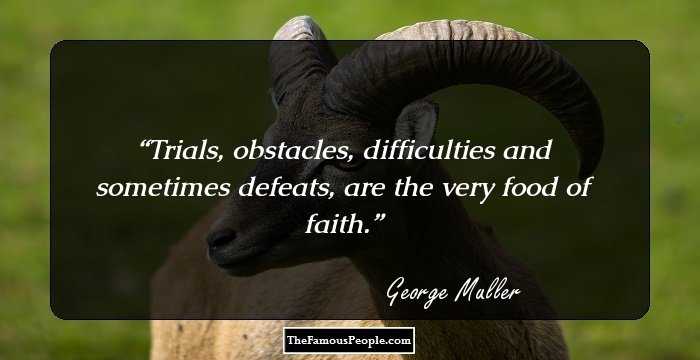 He went to London in 1829 to work with Jews in England through the London Society for promoting Christianity amongst the Jews. However, the society did not allow him to preach and he went to Teignmouth and preached there. He was asked to become the minister of the Chapel of Ebenezer Chapel on a salary of £55 per annum.

He became a preacher for serving the people and not for monetary gains. Thus he renounced his regular salary. He also put an end to the practice of renting church pews.
He moved to Bristol in 1832 to work at Bethesda Chapel. He founded the Scriptural Knowledge Institution for Home and Abroad for aiding Christian schools and missionaries in 1834.
There were five branches of this organization, each dealing with a distinct area. These included Bible schools for children and adults, Bible distribution, missionary support, book distribution and care for orphans.
In 1836, he began to get deeply involved with orphans. He along with his wife began taking in orphaned girls into their rented house. Soon more houses were being used for the purpose of housing orphaned boys and smaller children.
As the number of orphans grew, he decided to build a separate orphanage for the kids. The orphanage at Ashley Down, Bristol was opened in 1849. There were five houses built for accommodating over 2,000 children.
Constructing the homes and providing for the children required a large amount of money. However, he never felt the need to request others for financial support—he only prayed to god to provide him the necessary funds, and it came to him from unsolicited sources.
The architect who built the houses did so without taking any fees, and several members of the church pooled their funds to help the orphans. Donations also came in kind in form of bread, milk, clothes, etc.
The children at the orphanage were provided with a high standard of living. They were well fed and educated, and Muller made efforts to get the children gainful employment as apprentices and professionals when they were old enough to leave the orphanage.
Starting from 1875 till 1892, he and his second wife went on a world tour traveling all over North America, Europe and Asia preaching and doing missionary work. Covering such vast distances during the pre-aviation era was an uncommon feat. 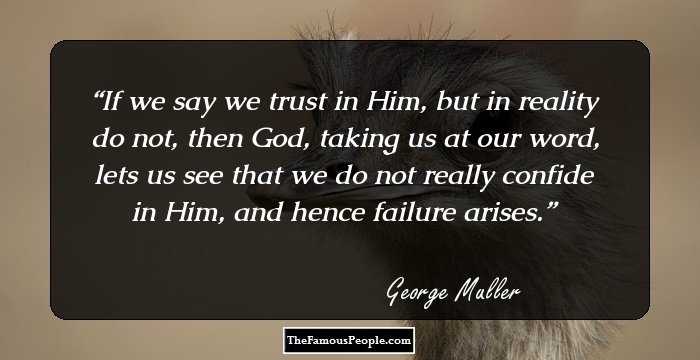 He is most respected and remembered for establishing the Orphan Houses at Ashley Down which could accommodate around 2,000 children at any one given time. Children in the orphanage were well cared for and educated. He cared for over 10,000 children during his lifetime.

Personal Life, Legacy & Death
He married Mary Groves in 1830. He was very devoted to his wife and the two were perfect partners in establishing the orphanages and caring for the children. She died in 1870.
He married Susannah Grace Sanger in 1871. Together with her he traveled all over the world, covering 42 countries to give sermons. 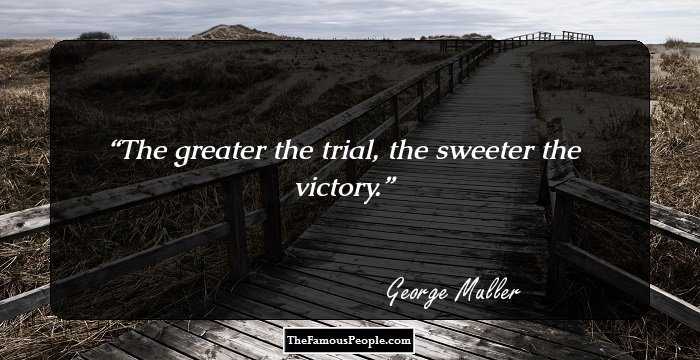 Quotes By George Muller | Quote Of The Day | Top 100 Quotes

See the events in life of George Muller in Chronological Order