Nathan Hale was a soldier for the Continental Army during the American Revolutionary War. A captain in the Continental Army during the Revolutionary War, he famously announced "I only regret that I have but one life to lose for my country" just before being executed by the British for being a spy. He grew up in Connecticut and graduated from Yale College. He began his career as a teacher, but when the War for Independence broke out, he accepted a commission as a lieutenant in the Continental Army. He served at Boston and then New York, where he volunteered to go behind British lines to gather intelligence. He was captured by the British and immediately admitted that he was spying for General George Washington. British general William Howe ordered the execution of Hale, who was hanged the next day. Although Hale's spying mission ended in failure, his display of patriotism made him a hero among the colonists fighting for independence. He died very young, at the age of 21, but his dedication to his beliefs are one of the symbols of American bravery and principles. Many statues and memorials honor this martyr and he was designated the official state hero of Connecticut 13517
DID WE MISS SOMEONE?
CLICK HERE AND TELL US
WE'LL MAKE SURE
THEY'RE HERE A.S.A.P
Quick Facts

Cause of Death: Hanged

American People
American Men
Male Spies
American Spies
American Soldiers
Childhood & Early Life
Nathan Hale was born on June 6, 1755 in Coventry, Connecticut, and was the second of twelve children born to Richard Hale and Elizabeth Strong. He belonged to one of the most prominent families in the region.
Both his Parents were devout Puritans who believed in the value of hard work, the virtue of religion and the importance of education. His father had built a thriving livestock business.
When he was fourteen years old, he was sent with his brother Enoch, who was sixteen, to Yale College. Nathan was a classmate of fellow patriot spy Benjamin Tallmadge.
The Hale brothers belonged to the Yale literary and debating society, Linonia, which debated topics in astronomy, mathematics, literature, and the ethics of slavery. He graduated with first-class honors in 1773 at age 18. 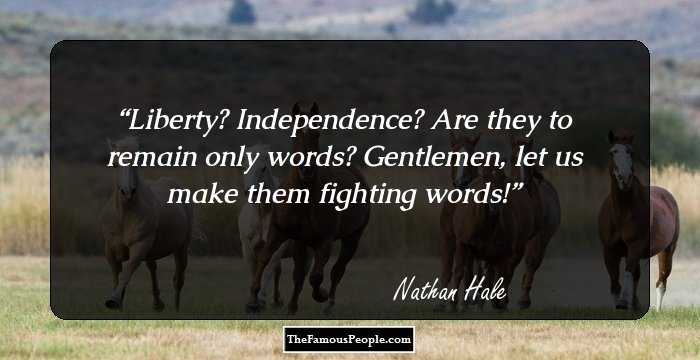 Famous Beautiful Women With Green Eyes
Career
Upon graduation, Hale became a teacher, first in East Haddam and later in New London. After the Revolutionary War began in 1775, he joined a Connecticut militia and was elected first lieutenant.
When his militia unit participated in the Siege of Boston, he remained behind, perhaps it was because his teaching contract in New London did not expire until several months later, in July 1775.
A letter from his friend Tallmadge who participated in the Boston Siege inspired Hale to accept a commission as first lieutenant in the 7th Connecticut Regiment under Colonel Charles Webb of Stamford in July 1775.
In January 1776, he was promoted as captain and selected to lead Thomas Knowlton's “Rangers". In August, the British troops crossed Lower New York Bay and invaded Long Island.
The colonial army moved to Manhattan Island to prevent the British from capturing New York City. In September, Gen. Washington was desperate to determine the upcoming location of the British invasion of Manhattan Island.
His commander Thomas Knowlton was asked to fill the duty of getting a volunteer. Hale saw the assignment as a patriotic opportunity, though he had not physically fought in the war yet.
During the Battle of Long Island, which led to British victory, New York City was captured via a flanking move from Staten Island across Long Island. Gen. Washington became desperate for a win.
Disguised as a loyalist-Dutch schoolmaster, Nathan departed from the American Lines from Harlem Heights Carrying his College Diploma as his credentials. He embarked on the mission fully aware of the risks involved in it.
During his mission, New York City fell to British forces on September 15 and Washington was forced to retreat to the island's north in Harlem Heights (what is now Morningside Heights).
Continue Reading Below
According to Consider Tiffany, a Connecticut shopkeeper and Loyalist’s account obtained by the Library of Congress, Major Robert Rogers of the Queen's Rangers saw Hale in a tavern and recognized him despite his disguise.
According to Tiffany, Rogers led Hale to believe that he himself was "upon the business of spying out the inclination of the people and motion of the British troops”.
Hale then told Rogers of his mission, and Rogers invited him for dinner at his quarters with several friends. There, in the midst of their conversation, Hale was surrounded and seized by British soldiers.
He was reportedly questioned by British General William Howe who had established his headquarters in the Beekman House in Manhattan, and physical evidence was found on him. Rogers provided information about the case.
According to tradition, Hale spent the night in a greenhouse at the mansion. He requested a Bible; his request was denied. Sometime later, he requested a clergyman. Again, the request was denied.
Bill Richmond, a 13-year-old former slave and Loyalist was reportedly one of the hangmen, "his responsibility being that of fastening the rope to a strong tree branch and securing the knot and noose." 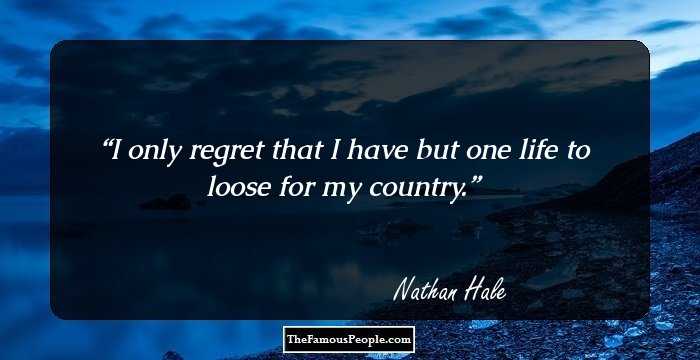 Quotes: Life, I
Major Works
Hale volunteered on September 8, 1776, to go behind enemy lines and report on British troop movements, knowing fully well that an act of spying was immediately punishable by death.
On the morning of September 22, 1776, he was marched along Post Road to the Park of Artillery, which was next to a public house called the Dove Tavern and hanged.
Personal Life & Legacy
By all accounts, Hale was a picture of dignity before hanging and supposed to have he uttered the famous words, “I only regret that I have but one life to lose for my country”.
An empty grave cenotaph was erected by his family in Nathan Hale Cemetery in South Coventry, Connecticut. Statues were erected at City Hall Park and Yale Club claiming to be the hanging site.
A statue designed by Frederick William MacMonnies was dedicated on the anniversary of Evacuation Day, 1893, at City Hall Park, New York. For the first time Hale was given an idealized square-jawed image.
Halesite, a hamlet in Long Island is named after Hale. There is a memorial plaque set into a large boulder, brought from the beach nearby where Hale is supposedly landed on his fateful mission. 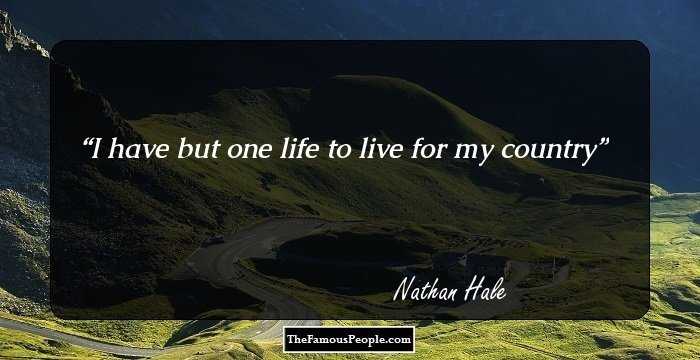 Quotes: Life, I
Trivia
These are the words of an American Revolutionary soldier- “It is the duty of every good officer to obey any orders given him by his commander in chief”.
This American patriot’s famous valediction echoes the words in Act IV, Scene 4 of Joseph Addison’s tragedy, Cato: "What a pity it is/That we can die but once to serve our country.”
You May Like

See the events in life of Nathan Hale in Chronological Order