Advanced Search
Erin Angle is the wife of the Hollywood actor Jonathan Edward Bernthal. She worked as a nurse earlier but is now a stay-at-home mother. She dated Jonathan for several years before getting married to him. They have three adorable children. Erin is the niece of ‘World Wrestling Entertainment’ (WWE) superstar Kurt Angle. Despite being related to such celebrities, Erin stays away from the limelight. She is rarely seen at any Hollywood event. Erin does not even have a social-media account. However, one can find her pictures with her husband and children on Jonathan’s social-media accounts. American People
American Women
American Nurses
Aquarius Women
Married Life
Erin and Jonathan got married on September 25, 2010. They had dated each other for several years before walking down the aisle. Despite getting married to a celebrity, she preferred her wedding to be a low-key affair. They had a private wedding ceremony in Potomac, Maryland. The marriage was officiated by Jonathan’s acting teacher, Alma Becker.
When the news of Erin’s pregnancy was revealed and Jonathan was asked about the baby’s gender, he politely refused to answer and said that he would reveal the gender only if Erin gave him the permission to do so. They have two sons, Henry, born in August 2011, and Billy, born in January 2013. Their daughter, Adeline, was born in February 2015.
Erin and Jonathan now live happily with their three children. Although Erin stays away from the glamor of the film fraternity, she claims to be Jonathan’s biggest fan.
She has always supported her husband’s career. Erin chose to be a stay-at-home mother so that Jonathan could focus on his work.
Erin and Jonathan owned a cottage in Venice, which they later sold for almost $2 million.
Continue Reading Below
Family & Personal Life
Erin’s exact date of birth is not known yet. She was born in the US. Erin is the niece of professional wrestler Kurt Angle.
Erin has lived a life away from the limelight. Hence, not much is known about her childhood. She is not even active on any social-media platform. However, Erin is often seen in pictures with Jonathan and their children on his 'Instagram' page.
Erin worked as a trauma nurse when she married Jonathan. She seems happy and content to be a stay-at-home mother. Erin is a dog lover. Erin and Jonathan own two English Mastiff dogs. 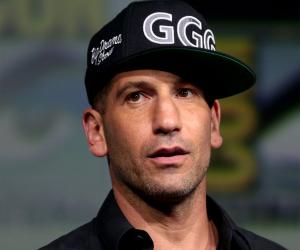