(Actor Known for Starring in His Self-Produced 'ABC Sitcom')

Advanced Search
George Lopez is an American actor and comedian best known for starring in his own TV shows ‘George Lopez’, ‘Lopez ‘ and ‘Lopez Tonight’ and for appearing as George in the series ‘Saint George’. The actor has also appeared in a number of other TV programs including ‘The Brothers García', 'Freddie', 'The Naked Brothers Band', 'Shake It Up' and 'America's Got Talent' as well as in several movies including 'The Adventures of Shark Boy and Lava Girl', 'Shannon's Rainbow', and 'The Spy Next Door.' He is of Latin American descent and has actively promoted Hispanic culture and heritage through his works. The talented and socially conscious comedian has earned various honors for his contributions to the Latino community, such as the Latino Spirit Award for Excellence in Television, the National Hispanic Media Coalition Impact Award, and the Imagen Vision Award. He has also received a star on the Hollywood Walk of Fame. Besides acting, the American star has a deep interest in philanthropy and is involved with various charitable causes. He received the Artist of the Year and Humanitarian Award from the Harvard Foundation in 2004 for his artistic works and charitable activities. American People
Talk Show Hosts
Stand-up Comedians
American Men
California Actors
Career
George Lopez first appeared in the 1990 flick titled ‘Ski Patrol’. After this, he appeared in the movie ‘Bread and Roses’. In 2002, he began his own series ‘George Lopez’. The same year, he played ‘Mr. Guzman’ in the movie ‘Real Women Have Curves’. Soon after this, the actor had roles in the programs ‘Naughty or Nice’ and ‘Freddie’ and in the films ‘The Adventures of Shark Boy and Lava Girl’, ‘Balls of Fury’ and ‘Tortilla Heaven’.
In 2008, he made his voice acting debut in the movie ‘Beverly Hills Chihuahua’. That year, Lopez also appeared in three episodes of ‘Reno 911’. He next did the Nickelodeon movie ‘Mr. Troop Mom’. The same year, he began hosting the talk show ‘Lopez Tonight’. The American artist was then cast in the flick ‘The Spy Next Door,’ in which he played the character of Glaze.
In 2011, he did the movie projects ‘Beverly Hills Chihuahua 2’, ‘The Smurfs’ and ‘Rio’. Two years later, he voiced the character of Thurman in ‘Escape from Planet Earth’ as well as the character of Grouchy Smurf in ‘The Smurfs 2’. Lopez reprised his voice role in ‘Rio 2’ in 2014. The same year, he produced and starred in the TV series ‘Saint George’. He then began his sitcom show ‘Lopez’ in 2016. That year, he also appeared as a guest judge on ‘America's Got Talent’.
Recommended Lists: 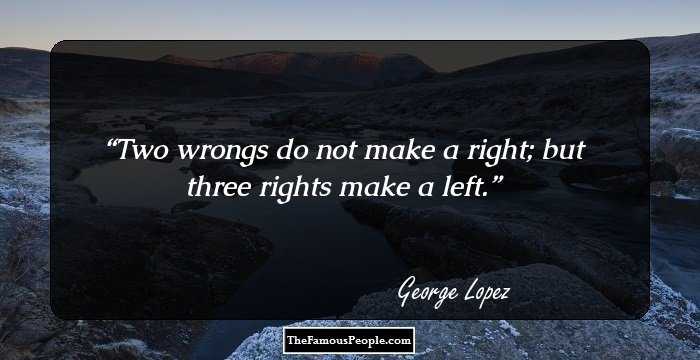 Continue Reading Below
Personal Life
George Lopez was born on April 23, 1961 in Mission Hills, Los Angeles, California, USA, to Anatasio and Frieda Lopez. Both of his parents abandoned him when he was an infant and he was raised by his grandparents. He graduated from San Fernando High School.
He married Ann Serrano in 1993. The couple had a daughter, Mayan, before separating and eventually divorcing in 2011.
Talking about the actor’s philanthropic works, he has his own philanthropic organization named The Ann & George Lopez Foundation. He received the Manny Mota Foundation Community Spirit Award for his social endeavors. Lopez was also named the Honorary Mayor of Los Angeles for his fund-raising efforts for the earthquake victims in Guatemala and El Salvador.
Recommended Lists: 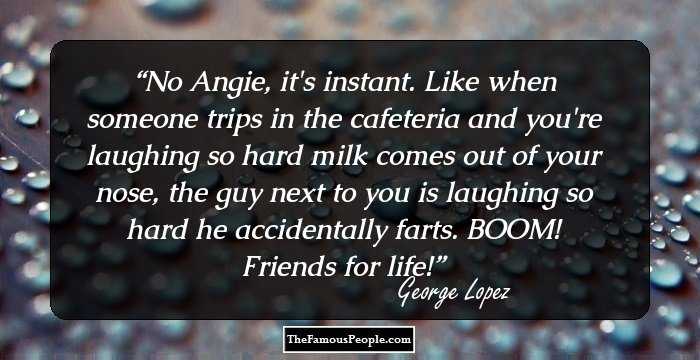 Quotes By George Lopez | Quote Of The Day | Top 100 Quotes