George Eastman was an inventor, an entrepreneur and a philanthropist all rolled into one. He was the founder of Eastman Kodak Company, which revolutionized the concept of photography. It was his invention of roll films and Kodak camera, which simplified the art of taking pictures and popularized it among the masses. What was unique about him was that unlike many other inventors he also had a shrewd sense of business. By mass producing his inventions and constantly upgrading his products, he not only made millions of dollars, but was also able to bring photography within easy reach of the common people. At the same time, he used a ‘razor and blade strategy; he sold his cameras at a very low profit, but maintained a large margin in films, chemicals and papers. However, he also had a large heart and unlike many other industrialists, he was a caring employer. In fact, Eastman Kodak was the first American company, which offered shares of profit to its workers. Himself a school dropout, he also donated millions of dollars to different educational institutes and healthcare units.
Continue Reading Below American Celebrities
Business People
American Men
Cancer Entrepreneurs
American Entrepreneurs
Childhood & Early Life
George Eastman was born in Waterville New York on July 12, 1854 and spent his early childhood in a large farm owned by his parents, George Washington Eastman and Maria (Kilbourn) Eastman.
His father George Washington also ran an educational institute, Eastman Commercial Collage, in Rochester. It required him to split his time between Rochester and Waterville. Consequently, young George was left in the care of his mother most of the time.
Later in 1860, as his health began to deteriorate, George Washington gave up the farm and moved his family to Rochester. Unfortunately, he died in 1862, leaving his three children under the care of their mother. To make the ends meet Maria Eastman began to take in boarders.
Eastman also had two older sisters, Ellen Maria and Katie. Katie was afflicted with polio at a very young age and was confined to wheelchair. She died in 1870 leaving her family distraught.
Young Eastman was studying in a public school in Rochester. However, due to monetary constraint he could not finish his schooling. At the age of 15 or 16, he left school to take up the job of an office boy in an insurance company. However, he continued his education privately and in 1877, he became a book keeper at Rochester Saving Bank. 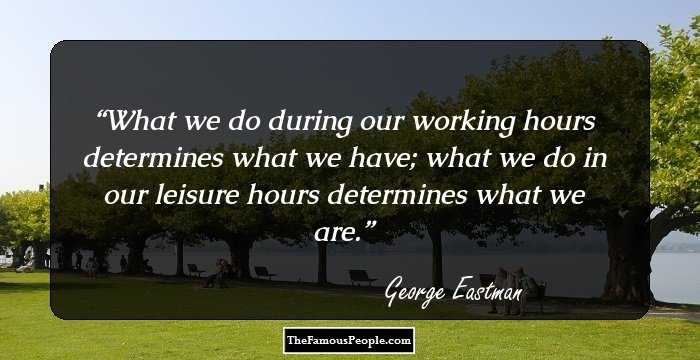 Who Is The Most Popular BTS Member?
Career
Although the job of the book keeper solved his financial problems to some extent, George Eastman strived for more. He soon decided to take up the real estate and by 1877 he had saved enough money to take the first step.
At that time, Hispaniola, located in the Caribbean, was undergoing a boom in land speculation. George Eastman decided to go there and investigate for himself. To document his visit, he bought a camera. However, the trip failed to materialize; but the camera remained with him.
Very soon Eastman became an avid photographer. In those days, taking photos was a cumbersome affair. Cameras were big and the wet plate technology used those days was also very clumsy. Neither was the dry plate technology that was just being evolved very convenient. Inspired by British Journal of Photography, he began to improve on it. George Monroe and George Selden, from whom he learnt much about photography, also encouraged him in this endeavor.
Eastman began experimenting at home and very soon invented a method in which glass plate were coated with gelatin and silver bromide. He had the coating machine and the method patented in England in 1879. He also applied for the same in the USA in September, 1879; but it was issued in April 1880. He next sold his English patent to open a plate manufacturing unit in Rochester.
Eastman next thought of replacing the glass plate with paper. He had it coated with gelatin and other photographic chemicals. The film so made was then rolled on spools. Next, he replaced the paper with transparent film. He had both these products patented in 1884.
In the same year, George Eastman along with William H. Walker invented a light weight roll holder that would fit into any camera. This too was patented in 1886, under US Patent 317049. The invention made outdoor photography even easier.
In 1888, Eastman created a simple camera, which was easy to carry and to use. It cost just $25 and came with 100 exposure role of films. In the beginning, the photographers were required to send back the camera along with ten dollars once the roll was finished. The company would wash the roll and send the photographs back to their clients. “You Press the Button, We Do the Rest” became their slogan.
Eastman next devised flexible transparent film and the company began to manufacture it from 1889. This new invention was a landmark in the development of the motion picture industry.
In 1892, Gorge Eastman established Eastman Kodak Company at Rochester. Apart from the factory at Rochester, the company also had another one in Harrow, England. Eastman first occupied the position of the General Manager. Later he relinquished the post to concentrate on his philanthropic works, but remained the treasurer of the company. Finally, he became Chairman of the Board and the President.
Continue Reading Below
From 1897 onwards, Eastman made a series of inventions. The company brought out the pocket Kodak in 1897, folding Kodak in 1898 and Brownie camera in 1900. The last one was meant for the children and was priced at $1 per piece.
In 1903, the company began to manufacture non curling film. Earlier, films had the tendency to curl and it created problems, especially while processing. Non curling films marketed by Kodak helped to solve these problems to a large extent.
When the World War I started in 1914, Kodak Laboratories, under the guidance of George Eastman, joined the war effort. Thanks to their contribution, USA could build up its own chemical industry and become independent of German supply.
He also developed unbreakable glass lenses for gas masks for the use of military and special cameras for taking pictures from the planes.
1928 was another important year for George Eastman. Color films, which almost revolutionized photographic industry, began to be marketed from this year.
Very soon his Eastman Kodak Company became one of prime companies of the world. By 1900, there were three thousand people working in his factories. By 1920, the number reached fifteen thousand. The company kept on growing even after his death. By 1976, it commanded 75% of the camera sales and 90% of the roll sales in the United States. 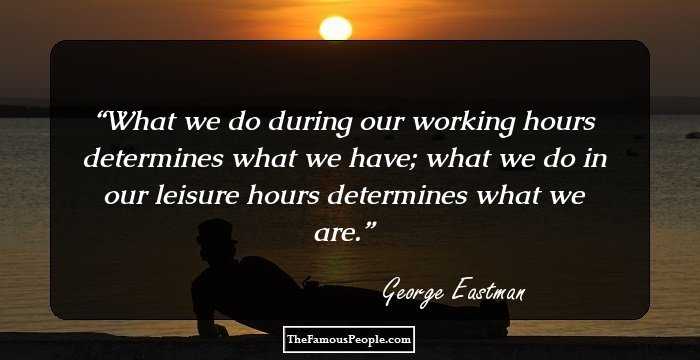 Major Works
Invention and manufacture of roll film and the Kodak camera are the two major works for which George Eastman is remembered even today. These inventions enabled common people to take up photography as a hobby.
Philanthropic Works
George Eastman was the first business man to offer share of profit to the company employees. He also made individual gifts to the workers.
Continue Reading Below
In 1911, he established Eastman Trust and Saving Bank.
In 1915, he founded Center for Governmental Research, a nonprofit organiztion in Rochester, with the aim of getting “things done in the community” and also “for keeping citizens informed.”
In 1917, George Eastman donated a large sum of money to establish a free dental dispensary for the children of Rochester because he believed that to grow healthy children should have healthy teeth. It was later renamed Eastman Dental Dispensary.
In 1918, George endowed the Eastman School of Music at the University of Rochester.
In 1921, he provided money for setting up a school of dentistry and medicine at the University of Rochester.
He also contributed significantly to the Rochester Institute of Technology (RIT) and donated large amount of money for the construction of several buildings at the second campus of the Massachusetts Institute of Technology
In addition, George Eastman made major donations to the Tuskegee University of Alabama and Hampton University of Virginia. These are two historically important black universities in the United States.
Eastman’s philanthropy did not recognize any boundary. In 1926, he donated two hundred thousand pounds to fund a dental clinic in London. Later it was incorporated into Royal Free Hospital. Now it provides free dental care to disadvantaged children of the city. 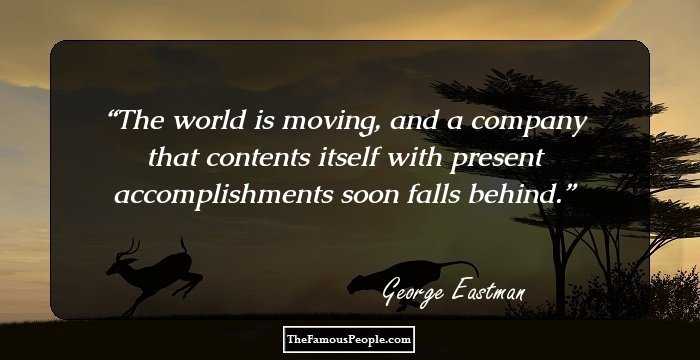 Awards and Achievements
George Eastman was awarded American Institute of Chemist Gold Medal in 1930.
In 1954, U.S. Post Office issued a commemorative stamp marking the birth centenary of George Eastman.
Personal Life and Legacy
George Eastman did not marry and so did not have any family of his own. He was however, very close to his sister’s family and had a platonic relationship with Josephine Dickman, the wife of his business associate George Dickman.
He was also very close to his mother Maria Eastman, who had brought him up almost single handedly. When Maria died in1907, George was inconsolable and could not stop crying. Kilbourn Theater, located within Eastman Theatre in Rochester, has been dedicated to her memory
In the last two years of his life, George Eastman suffered from some kind of spine disorder, which was not only painful, but was slowly making him disabled. On March 14, 1932, George committed suicide by shooting himself through his heart. In his parting note, he had written, “Dear Friends, my work is done – Why wait? GE”. He was later buried at Kodak Park in Rochester and his entire estate went to the University of Rochester. The Eastman House, where he lived is now a National Historic Landmark.
George Eastman has been represented by two stars in the Hollywood Walk of Fame for his invention of roll film.
In recognition of his support and substantial donations, the Rochester Institute of Technology has a campus dedicated to him and MIT had a plaque installed on one of the building he funded. The University of Mississippi also has an auditorium named after him.
Trivia
The word Kodak does not have any meaning. Yet George Eastman, in consultation with his mother Maria, decided to call their company Kodak because he thought the letter K signified strength. Besides, the name was unique and did not resemble anything else.
You May Like

Quotes By George Eastman | Quote Of The Day | Top 100 Quotes

See the events in life of George Eastman in Chronological Order