George Carlin was an American comedian well known for his black humor and opinions on controversial subjects. Carlin, who came into prominence during the 1970s, was a bold and outspoken individual who often voiced his opinions on topics that were considered taboo at that time. His most famous performance was his outrageous comedy routine ‘Seven Dirty Words,’ which played a significant role in the U.S. Supreme Court’s decision to regulate indecent material on broadcast media in 1978. He started his comedic career by pairing up with Jack Burns with whom he performed successfully for two years before moving on to pursue a solo career. He began performing on variety shows in television and soon became popular as a frequent performer on ‘The Tonight Show.’ After starting out as a conventional comedian, he began experimenting with his looks and style. He stirred up considerable controversy with his routine ‘Seven Words You Can Never Say on Television,’ which not only increased his popularity, but also made him a household name in the United States. George Carlin has influenced many comedians, including Lewis Black, Jerry Seinfeld, Dave Attell, Bill Burr, Ben Stiller, Kevin Smith, Russell Peters, and Jay Leno among many other famous personalities. He was posthumously honored with the prestigious ‘Mark Twain Prize for American Humor’ in 2008. In 2017, he was ranked second on ‘Rolling Stone’ magazine's list of ‘50 best stand-up comedians of all time.’ Cause of Death: Cardiac Failure

His parents separated when he was very young. He was raised by his very religious mother with whom he had a strained relationship.

He attended ‘Cardinal Hayes High School,’ which he left after just three semesters. He also went to ‘Bishop Dubois High School’ for a brief period of time.

He was an active participant at ‘Camp Notre Dame’ in Spofford and often won the camp’s drama award. 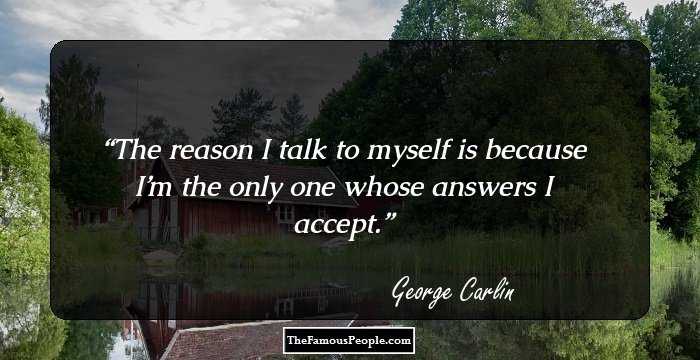 He began working as a part-time disc jockey while he was serving in the Air Force. When he was relieved from service, he took up a job with the KXOL radio station in Texas where he met Jack Burns.

He teamed up with Jack Burns in 1959 and the duo performed at ‘The Cellar in Fort Worth.’ They moved to California in 1960 and recorded an album titled ‘Burns and Carlin at the Playboy Club Tonight.’ The pair broke up to pursue individual careers after working together successfully for two years.

He soon moved on to perform on television and appeared on shows like ‘The Ed Sullivan Show’ and ‘The Tonight Show.’ Some of his most popular routines were ‘The Indian Sergeant’ and ‘Stupid Disc Jockeys.’ He also appeared frequently alongside Johnny Carson.

In 1967, he released his debut solo album ‘Take-Offs and Put-Ons.’ It contained routines that were similar to the ones he had already performed on television shows. The album earned a ‘Grammy Award’ nomination.

His album ‘Class Clown’ was released in 1972. It featured his musings about taboo topics and included the popular routine ‘Seven Words You Can Never Say on Television,’ which became his signature performance.

His ‘Seven Words’ routine caused considerable controversy and he was even arrested in 1972 for violating the obscenity law. The drama surrounding his arrest only added to his popularity.

Television offers began pouring in and he hosted the premiere broadcast of ‘Saturday Night Live’ on NBC in 1975. He was also a frequent performer on the ‘Tony Orlando & Dawn’ series during the 1976-77 season.

During this period, he reached the zenith of his career. However, he began to suffer from heart problems which forced him to stay away from performing for some years.

In 1987, he was chosen to play a major supporting role in the comedy movie ‘Outrageous Fortune,’ which went on to become a smash hit. He played ‘Frank Madras’ in the film, which also starred Shelley Long and Bette Midler.

He was cast as ‘Rufus’ in the 1989 science fiction comedy film ‘Bill & Ted’s Excellent Adventure.’ The film was a commercial success and became a cult classic. He reprised the role in the film’s sequel ‘Bill & Ted’s Bogus Journey’ in 1991.

He co-created the sitcom ‘The George Carlin Show’ in 1993 with Sam Simon. He starred as taxicab driver ‘George O’Grady’ in the show that premiered in January 1994 and ran for two seasons.

Carlin not only had heart problems, but also had a history of drug abuse and alcoholism which interfered with his career. He was active during his final years in spite of facing these challenges.

His final comedy album ‘It’s Bad for Ya’ was out in 2008. It was recorded months before his death and peaked at number two on the ‘U.S. Billboard Top Comedy Albums Chart.’ 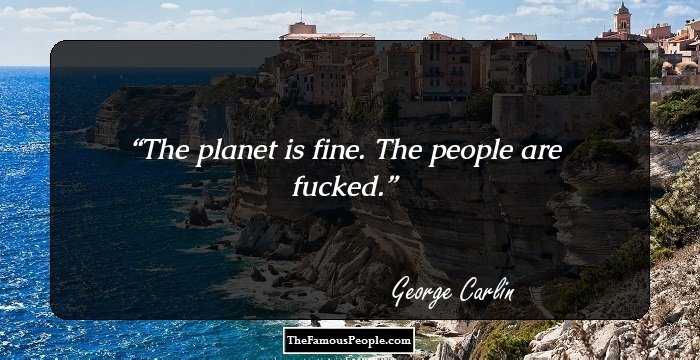 George Carlin was a comedian who was much-loved for his frank and outrageous commentary on controversial topics. In a career spanning over five decades, the ‘Seven Words You Can Never Say on Television’ routine, which was featured on his album ‘Class Clown,’ became his most famous work.

He was presented the ‘Lifetime Achievement Award’ at the ‘American Comedy Awards’ in 2001. This award is given to honor performers for their contribution to comedy, especially in the field of television and films.

He won four ‘Grammy Awards,’ including an award for his final album ‘It’s Bad For Ya,’ which received the ‘Grammy Award’ for ‘Best Comedy Album’ in 2009. 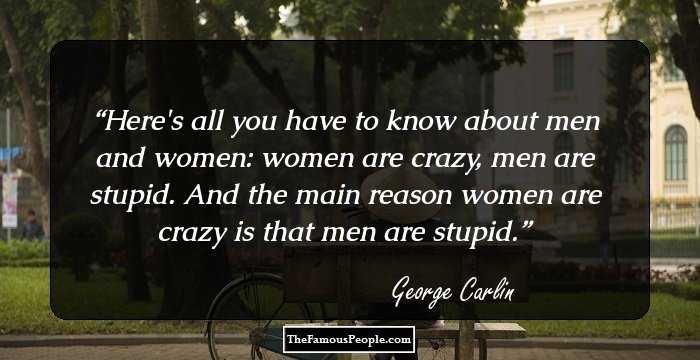 Quotes: You, Women
Personal Life & Legacy
He married Brenda Hosbrook in 1961 and had a daughter with her. Their marriage lasted till his wife’s death in 1997.
In 1998, he married Sally Wade. They remained married till his death.

He had a history of heart problems and suffered three heart attacks. He also had troubles with alcoholism and drug abuse, which further deteriorated his health. He died of heart failure at the age of 71 on June 22, 2008.

In 1987, he was honored with a star on ‘Hollywood Walk of Fame.’ This star is placed in front of ‘KDAY Studios’ near Sunset Boulevard, where he had performed with Jack Burns.

Quotes By George Carlin | Quote Of The Day | Top 100 Quotes

See the events in life of George Carlin in Chronological Order