Advanced Search
George Cole was an American actor, best known for playing the lead role as Arthur Daley in the long running British comedy drama series titled ‘Minder.’ George was born in Tooting, London, to a single mother and was given up for adoption 10 days after he was born. He took acting in order to avoid being a butcher as he had left school at the age of 14. He began auditioning for theatrical productions and began his acting career at the same age. Overtime, he also appeared in films and made his film debut at the age of 15 in the 1941 film titled ‘Cottage to Let.’ In the rest of the 1940s, he appeared in films such as ‘Journey Together’ and ‘The Spider and the Fly.’ He began gaining recognition in the 1950s with fantasy drama film ‘Scrooge’ and comedy film ‘Too Many Crooks.’ He kept working in films and television in the next 5 decades as well and appeared his last film role in the 1996 film ‘Mary Reilly.’ As for his television career, he played the lead role in the hugely successful series titled ‘Minder’ and played supporting roles in series’ such as ‘The Bounder,’ ‘Comrade Dad,’ and ‘My Good Friend.’ Paddy Considine
2nd April In History
DID WE MISS SOMEONE?
CLICK HERE AND TELL US
WE'LL MAKE SURE
THEY'RE HERE A.S.A.P
Quick Facts 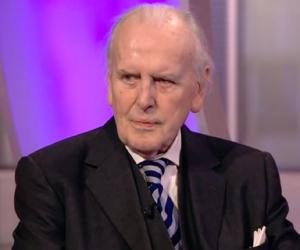 British Celebrities
Aries Actors
British Actors
British Film & Theater Personalities
Aries Men
Childhood & Early Life
George Cole was born George Edward Cole, on April 22, 1925, in Tooting, London, England, to a single mother. His mother abandoned him soon after he was born and 10 days after his birth-day, George was adopted by George and Florence Cole. George was a Tooting Council employee while his mother Florence was a cleaner. He grew up struggling with poverty.
What kept him going was his natural talent for mimicry and his singing skills. He used to entertain his classmates with his antics and also visited local theatres to entertain himself. He had developed a keen interest in the performing arts very early in his life.
He was also good in studies an earned a scholarship to study in the Surrey county council school in Morden. But his hopes of getting good education fell apart when his father fell sick and had to quit his job. The responsibility to financially support the household fell on George and he had to drop out of the school at the age of 14.
He began working as an apprentice at a local butcher’s shop and also sold newspapers. In 1939, he read a poster on a wall, which was an advertisement for requirement of a boy for a West End Show. George auditioned for the show, in which he recited a few poems. He was selected and hence, in 1939, he began his career in performance arts, appearing in theatrical productions.
Continue Reading Below
Career
George made his acting debut at the age of 15, appearing in the film titled ‘Cottage to Let,’ playing a supporting role as Ronald. He had appeared alongside Scottish actor Alastair Sim in the film.
Sim liked Cole and offered to be his mentor and took him to his house. He further trained George in acting, accent and several other aspects of being an actor. George lived with the Sim family until he was 27 years old.
His performance in his debut film ‘Cottage to Let’ had received huge appreciation. He followed with more supporting roles in film such as ‘Journey Together’ and ‘My Brother’s Keeper.’ During the first two decades of his acting career, George appeared in 11 films that also starred Alastair.
However, he took a slight break from acting in 1944, during the Second World War and worked in the Royal Air Force until 1947, as a radio operator.
He returned in the 1950s as an adult actor and worked in many comedy films back to back. He appeared playing supporting roles in fantasy drama film ‘Scrooge’ and comedy film ‘Too Many Crooks.’
In 1954, he also appeared in the film titled ‘The Belles of St Trinian’s, a comedy film based on the popular comedy strip named ‘St Trinian’s School.’ He played one of the lead roles as Flash Harry in the film, while his mentor Alastair Sim essayed the main lead role. The film was a huge critical and commercial success and spanned three more sequels. It happened to be one of the most successful comedy film series’ of its time.
By the early 1960s, George was beginning to be recognized as the lead actor. He appeared in films such as ‘One Way Pendulum’ and ‘The Pure Hell of St. Trinian’s’ in the 1960s. He also appeared playing a supporting role as Flavius in the 1963’s film titled ‘Cleopatra.’
In 1966, he appeared playing the main lead role in the BBC drama show titled ‘The Caramel Crisis,’ playing the titular role of Caramel. He took a 4 years long break from acting after that and returned with the lead role as Roger Morton in the gothic horror film titled ‘The Vampire Lovers.’ The film received mixed response on the critical scale and was a box office success.
However, by the early 1970s, his stars somehow began fading as he appeared mostly in supporting roles in films such as ‘Fright’ and ‘Take me High.’ None of those films were even remarkable successes.
He played a guest role (Dennis Longfield) in one episode of the police drama series ‘The Sweeney’ in the mid-1970s and followed it with a lead role in the sitcom titled ‘Don’t Forget to Write!.’ The series started off well but lost its charm in the second season and was subsequently cancelled.
He had a huge career moment in 1979 when he was hired to essay the lead role as Arthur Daley in the British comedy drama about the London Underworld, titled ‘Minder.’ The series was a huge critical and commercial success and ran until 1994, for 11 seasons and 114 episodes.
George worked less 1980s onwards. More recently, he appeared playing small roles in series’ such as ‘Marple’ and ‘Midsomer Murders,’ with his last appearance being in the series titled ‘Heartbeat.’
Family & Personal Life
George Cole dated actress Eileen Moore in 1954 and had two children with her, before the couple divorced in 1962. George then married actress Penny Morrell in 1967 and the couple stayed together until his death in 2015. George had two children from his second marriage as well.
His son, Cris Cole, from his first marriage, is a screenwriter.
George died on August 5, 2015, after a short illness. He was 90 years old at the time of his demise.
His autobiography, ‘The World Was My Lobster,’ was published in 2013.
In 1992, he was honoured with Officer of the Order of the British Empire (OBE).

See the events in life of George Cole in Chronological Order