Boy George is an English singer, songwriter, fashion designer, and DJ. He came into prominence after becoming part of the ‘New Romantic’ movement in the 1980s. George became one of the pioneers of the movement and received acclaim for his rhythm, blues, and reggae style of singing. He was also noticed for his androgynous appearance. He was discovered by the former manager of ‘Sex Pistols’ and was made a part of the already existing group ‘Bow Wow Wow.’ However, his talent and unique style compelled him to form his own band called ‘Culture Club.’ It was during his ‘Culture Club’ days that George was recognized world over for hit singles like ‘Do You Really Want to Hurt Me?’ and ‘Karma Chameleon.’ George also worked on his solo career for years and experimented with dance and electronic music, collaborating with DJ and producers like Kinky Roland. Over the years, George has been associated with the usage of drugs like cannabis and heroin; he has also been put behind the bars for possessing these drugs. He has spent a lot of time in jail and rehabilitation centers to straighten up his life. George is also a writer; apart from writing song lyrics, he has also written two autobiographical books titled ‘Take It Like a Man’ and ‘Straight.’ Boy George was born George Alan O'Dowd on 14 June 1961, in Barnehurst, Kent, England, to Jeremiah and Dinah O’Dowd. His family includes his four brothers and a sister. To stand out among others, George used to dress outlandishly.

He had a difficult childhood because of his abusive father. He attended ‘Eltham Green School.’ His preposterous style of dressing and behavior led to his expulsion from school.

When George was thrown out of the school, he had to take up odd jobs to sustain himself. He worked as a fruit picker, milliner, etc. Even at home, he was not fully accepted for who he was. 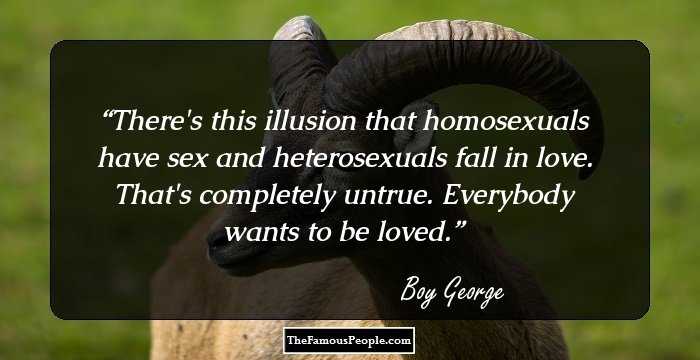 ‘The New Romantic Movement’ was emerging in the UK around 1980s and men in creative business started wearing androgynous clothes and make-up. George’s flamboyant style caught the attention of Malcolm McLaren and he joined ‘Bow Wow Wow.’

George formed his own band with bassist Mikey Craig, drummer Jon Moss, and Roy Hay. They had people from different ethnic cultures and beliefs in their group and hence decided to call their band ‘Culture Club.’

Culture Club’s first album ‘Kissing to Be Clever’ came out in 1982. The album’s single ‘Do You Really Want to Hurt Me?’ became a huge international hit, establishing George in the music industry.

In 1983, Culture Club’s second album ‘Colour by Numbers’ came out and became a massive hit in the UK. Its singles ‘Church of the Poison Mind’ and ‘Karma Chameleon’ became number one hits in 16 countries.

Although everyone was expecting their third album ‘Waking Up with the House on Fire,’ which released in 1984, to be a smash hit like the first two albums, the album received lukewarm response.

In 1986, he starred in an episode in the television series ‘The A-Team.’ He appeared as himself in the episode.

The band’s fourth album was ‘From Luxury To Heartache.’ As soon as the album came out, the band was plagued by controversies. George was arrested for the possession of cannabis and the band’s keyboardist died of heroin overdose.

In 1988 and 1989, three of his solo albums were released: ‘Tense Nervous Headache,’ ‘Boyfriend,’ and ‘High Hat.’ Around the same time, he also started his own record label ‘More Protein’ and released many underground hits under the label.

George became a weekly chart and music show presenter from 1990 to 1991 on ‘Blue Radio,’ a ‘Power Satellite’ channel. He also received accolades for the song ‘The Crying Game,’ which he had sung for the movie ‘The Crying Game.’

�In 1992, his record company was supposed to release a pop and world music album titled ‘Popularity Breeds Contempt’ by the band ‘Jesus Loves You.’ But the project was never completed and the album never got released.

George always wanted to try his hand at rock; he released a rock album called ‘Cheapness and Beauty’ in 1995. The album was experimental in nature and did not do very well commercially. He also starred in a London musical titled ‘Taboo.’

In 2002, he released his album ‘U Can Never B2 Straight,’ which was a compilation of various unreleased songs and ballads. The album was a huge success and helped accentuate George’s song writing abilities.

Over the next couple of years, he experimented in electronica and released a few albums under the pseudonym ‘The Twin.’ His experiment included a 13-track album titled ‘Yum Yum.’ In his experimentation, he also did covers of various songs.

Meanwhile in 2003, he presented a weekly show on ‘LBC 97.3,’ a London radio station. He also guest appeared on television series like ‘The Kumars at No. 42’ and ‘The Friday Night Project.’

In 2009, he signed a new deal and released an album titled ‘Ordinary Alien – The Kinky Roland Files.’ The album featured remixed versions of old tracks. He also started taking part in the ‘Night of the Proms.’

‘Culture Club’ reunited for two live concerts in Dubai and Sydney in 2011. The band also announced that they were working on their new reunion album.

In 2013, he released an album titled ‘Coming Home.’ The album was first released digitally and peaked at number two position on ‘Juno Download Chart.’ The same year, he also released the album ‘This Is What I Do,’ which he had written longtime back. The album received positive reviews from the critics.

In January 2016, he became a mentor in the fifth season of ‘The Voice UK,’ replacing Tom Jones. He left the show after a season and joined the sixth season of ‘The Voice Australia’ as a coach. After appearing in the seventh and eighth seasons of the show, he returned for the ninth season, which started airing in 2020.

Meanwhile in October 2016, he performed ‘Starman’ as a tribute to his idol David Bowie, who had died nine months prior. In 2017, he appeared on NBC’s ‘The Celebrity Apprentice’ to support the charity ‘Safe Kids Worldwide.’

The same year, he also collaborated with American rapper Pitbull for his tenth studio album ‘Climate Change.’ He then signed a new recording deal with ‘BMG Music Company’ in August. 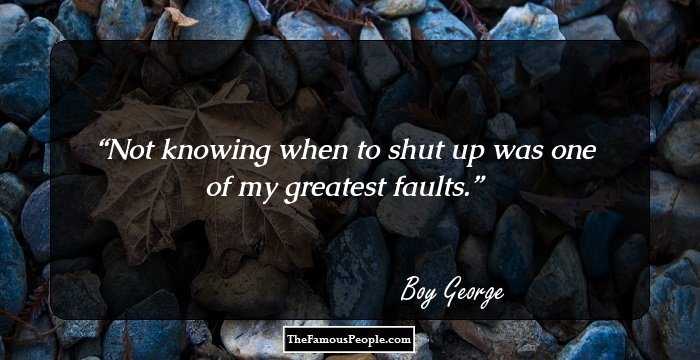 George’s first two albums with his band ‘Culture Club’—‘Kissing to Be Clever’ and ‘Colour By Numbers’—turned him into an international star. Songs like ‘Do You Really Want to Hurt Me?’ and ‘Karma Chameleon’ are still quite popular.

George has dealt with legal issues almost all his life; in the late-1980s, he was arrested for the possession of illegal drugs. Years later, Kirk Brandon sued him for mentioning their love affair in his autobiography.

He was arrested again in 2005 in Manhattan for the possession of cocaine and was sentenced to five days of community service. He was also asked to cough up $1000 fine. Later, he was also convicted on charges of assaulting Audun Carlsen. 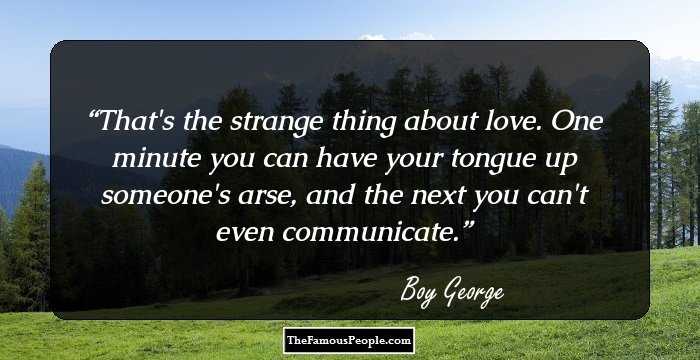 George had secret love affairs with artists like Kirk Brandon and Jon Moss.

Two documentaries have been made on George’s life: ‘The Madness of Boy George’ and ‘Living with Boy George.’

He has written two autobiographical books: ‘Take It Like a Man’ and ‘Straight.’

See the events in life of Boy George in Chronological Order