Rock legend and ‘Rush’ vocalist, Geddy Lee is regarded one of the most influential musicians of all time and is known for his authentic stylised technique and skill on the bass guitar. His voice has been referred to as ‘ astoundingly high’, while his distinctive style and charisma has inspired many musicians in the rock and heavy metal genre including, Cliff Burton of ‘Metallica’ and Steve Harris of ‘Iron Maiden’. He is considered one of the legendary bass players and continues to enthral audiences like no other musician in the genre of rock. This talented rock star was admired for his multi-tasking abilities as he would juggle roles on stage, while playing the bass, handling the keyboard and also singing at the same time. He amused audiences with unique and bizarre stage props like fully loaded refrigerators, coin-operated dryers and even rotisserie chicken ovens accompanied by a chef. He took up bass as a teenager and formed the rock band, ‘Rush’, along with guitarist Alex Lifeson and drummer John Rutsey. Some of their well-known albums include, ‘Snakes and Arrows’, ‘Permanent Waves’ and ‘Moving Pictures’. To learn more about his personal life and professional achievements, scroll down and continue to read this biography. Avril Lavigne
29th July In History
DID WE MISS SOMEONE?
CLICK HERE AND TELL US
WE'LL MAKE SURE
THEY'RE HERE A.S.A.P
Quick Facts

Canadian People
Rock Singers
Lyricists & Songwriters
Hard Rock Singers
Canadian Men
Childhood & Early Life
Geddy Lee was born as Gary Lee Weinrib, but later, he changed his name. His parents, Morris and Mary Weinrib, were Jewish refugees from Poland, who were survivors of concentration camps during World War II.
He grew up in the Willowdale neighbourhood of Toronto and attended Fisherville Junior High School, where he met his future band-mate, Alex Lifeson. 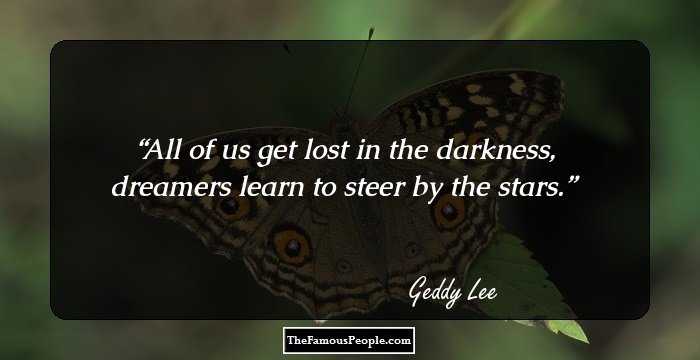 Continue Reading Below
Career
In 1968, Geddy Lee became the lead vocalist of the Canadian rock band, ‘Rush’, formed in the Willowdale neighbourhood of Toronto, Canada.
In 1973, he released ‘You Can’t Fight It’, along with drummer John Rutsey, as part of ‘Rush’s’ first single, ‘Not Fade Away’.
He sang, ‘Take Off’, the first hit single for the Canadian comedy album, ‘The Great White North’, in 1981. The album sold one million copies and earned a triple-platinum certification.
In 1982, he ventured into production and produced the album, ‘We Are the World’, for the humanitarian association, ‘USA for Africa’. He also performed as a guest singer for the song, ‘Tears Are Not Enough’.
A devoted baseball fan, he sang the Canadian National Anthem, ‘O Canada’ at the 1993 Major League Baseball All Star Game.
In 1999, he recorded a rock version of ‘O Canada’ as an accompanying soundtrack for the film, ‘South Park: Bigger, Longer and Uncut’. The same year he played the bass guitar for Mother Earth’s, ‘Good For Sale’.
When ‘Rush’ was going through a lull phase, he worked on his solo album, ‘My Favorite Headache’, which released on November 14, 2000.
In 2013, he made a brief appearance on the famous American sitcom, ‘How I Met Your Mother’ and played himself on the eighth season episode of ‘P.S I Love You’.
Major Works
His 1981 hit single, ‘Take Off’ for the Canadian comedy album, ‘The Great White North’, received a Grammy nomination, sold one million copies in North America, earned a triple platinum certification and was placed at the number one position in Canadian music charts. The track was also featured on ‘The Simpsons’.
Continue Reading Below
In 2000, he released his debut solo album, ‘My Favorite Headache’ that reached the number 52 position on the ‘Billboard 200’. The album’s title track, ‘Grace to Grace’ was played on the mainstream rock radio.
Awards & Achievements
In 1993, he was honoured with the ‘Best Rock Bass Player’ award by the ‘Bass Player’ readers’ poll.
In 1996, he was honoured with the title of ‘Officer of the Order of Canada’ along with his band mates, Alex Lifeson and Neil Peart.
In 2010, as a member of ‘Rush’, he was conferred the title, ‘Living Legend’ by Classic Rock Magazine.
In 2012, he received the prestigious, ‘Queen Elizabeth II Diamond Jubilee Medal’.
As a member of the band, ‘Rush’, he was inducted into the ‘Rock and Roll Hall of Fame’ in 2013.
He is ranked number 13 on the ‘Hit Parader’ list of ‘100 Greatest Heavy Metal Vocalists of all time’.
Personal Life & Legacy
He tied the knot with Nancy Young in 1976. The couple have two children, Julian and Kyla.
In 2004, he appeared on ‘Jweekly’, a Jewish magazine, for which he recounted his parents’ experiences at the concentration camps and also talked about his Jewish heritage.
Trivia
This Jewish, Canadian musician and member of ‘Rush’, is an ardent wine collector and is a frequent cheese and fine wine taste-tester in France.
This popular vocalist of ‘Rush’ fame, maintains a strict diet, avoids spices and acidic foods so as not to harm his vocal chords.
Recommended Lists:
Keyboardists #11
Musicians #193
Singers #408
Lyricists & Songwriters #492

See the events in life of Geddy Lee in Chronological Order