Frederick II also known as ‘Frederick the Great’ was a powerful and influential King of Prussia whose reign witnessed several military victories expanding the territories of Prussia. ‘Der Alte Fritz’ (meaning ‘Old Fritz’) as often called by the people of Prussia, he was successful in reorganizing the Prussian army. His leadership not only made Prussia a prominent military power but also one of the greatest states in Europe. He succeeded in the ‘Seven Years’ War’ overcoming great odds. An advocate of enlightened absolutism, he reformed the civil, bureaucratic and judicial system and pursued different religious policies in Prussia though remained prejudiced about the Jews. His reign saw appointments of senior bureaucrats and judges even if they were not of noble origin. He claimed several territories of Poland during the ‘First Partition of Poland’. He remained an icon for the Nazis who glorified him as a great German leader pre-Hitler. He was a great patron of art and architecture but also imposed laws to censor the press. His reign saw construction of several buildings including Berlin State Opera and the palace of Sanssouci among others. A great music lover, he could play the transverse flute and composed several sonatas and symphonies. As he was issueless, his nephew Frederick William II succeeded him. French People
German People
French Men
German Men
German Emperors & Kings
French Emperors & Kings
Childhood & Early Life
He was born on January 24, 1712, in Berlin to Frederick William I and Sophia Dorothea of Hanover. His father became the King of Prussia in 1713 succeeding his grandfather Frederick I and he became the crown prince.
His father was a martinet who advocated centralized government and reined Brandenburg-Prussia with absolute monarchy and was considered a paranoiac who possessed a violent temper.
He was taken care of by the Huguenot governesses in his childhood along with several tutors. His education and upbringing was strictly and vehemently controlled by his father with whom he soon developed a bitter conflict and faced physical violence, humiliation and public criticism.
Since his father intensely scorned off his interest in arts and literature, he secretly maintained a library with the aid of his tutor Jacques Duhan, where he obtained books on French philosophy, poetry and Roman and Greek classics.
His mother, daughter of future King George I of Britain, was a polite and knowledgeable lady.
His conflict with his father escalated in 1730 when he tried unsuccessfully to run away with Lieutenant Hans Hermann von Katte. After being caught at the border he was imprisoned in the fortress of Küstrin and was compelled to watch the official execution of Hans Hermann von Katte on November 6.
Though he was released on November 18, 1730, he was appointed in local administration of ‘War and Estates Departments’ on November 20 as a junior official depriving a military rank.
He shared a good bond with his sister Wilhelmina throughout his life. On November 20, 1731 he was allowed to visit Berlin to attend his sister’s wedding with Margrave Frederick of Bayreuth.
Finally he returned to Berlin on February 26, 1732. 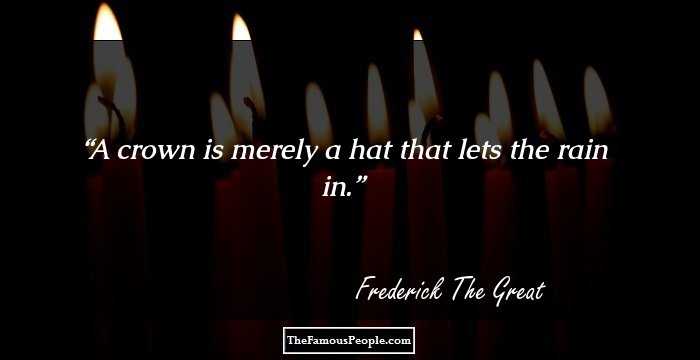 Continue Reading Below
Career
His first experience in active military service was during the ‘War of the Polish Succession’ when Prussia aided Austria with troops to combat France in the Rhineland. He came under the tutelage of the great Austrian commander, Prince Eugene of Savoy.
On May 31, 1740 when he became the King of Prussia succeeding his father, most of his territories were scattered and disconnected. With the objective of expanding and uniting several territories of Prussia, he successfully fought many wars.
He raised dispute on Maria Theresa’s succession after the death of her father Emperor Charles VI of the Holy Roman Empire. On December 16, 1740 the ‘War of Austrian Succession’ started and continued till 1748 and he soon invaded Silesia and occupied it in no time.
A series of Silesian wars followed. On April 10, 1741 he encountered the first major battle in Silesia, ‘Battle of Mollwitz’. Although Prussia became victorious in the battle, Frederick mistaken to have been defeated by the Austrians fled the battlefield giving command of the army to Field Marshal Kurt Schwerin, a move he later regretted.
On May 17, 1742 in the ‘Battle of Chotusitz’ the Austrian troops again combated the Prussian army but faced defeat by the powerful force led by Frederick II. The Austrians were compelled to sign the ‘Treaty of Breslau’ with Prussians in June 1742 that allowed Austria to retain only one section of Upper Silesia, the ‘Austrian or Czech Silesia’ while Prussia took control of rest of Silesia and Glatz County.
He remained victorious in the next couple of wars including ‘Battle of Hohenfriedberg’ and the ‘Battle of Soor’. On December 25, 1745 the ‘Treaty of Dresden’ was signed and Austria came under compulsion to comply with the previously signed ‘Treaty of Breslau’.
Overcoming great odds he succeeded in the ‘Seven Years’ War’ that started on August 29, 1756 and ended in 1763. His allies in the war were Great Britain, Hanover, Brunswick and Hesse while confronting a coalition of Austria, Russia Sweden, Saxony and certain minor states of Germany.
The anti-Prussian coalition crumbled after January 1762 following the succession of pro-Prussian Peter III after the death of Empress Elizabeth of Russia –an incident referred as ‘Miracle of the House of Brandenburg’. The ‘Treaty of Hubertusburg’ was signed.
During the ‘First Partition of Poland’ in 1772 he claimed several territories of Poland thus connecting most of his royal domain.
Continue Reading Below
A remarkable military theorist, he believed in forming alliances and analysed and applied tactics, strategies, logistics and mobility apart from personal experience of war. Slowly, other states including France and Russia started imitating this model of the Prussian army.
He introduced several reforms to make Prussia an economically and politically strong state. Some such measures were easing restrictions on domestic trade, imposing indirect tax, promoting trade and employment and controlling prices of grains. Thousands of new villages were formed, new farmlands were opened thus attracting huge number of immigrants.
An advocate of enlightened absolutism, he reformed the civil, bureaucratic and judicial system and pursued different religious policies that encouraged religious tolerance. His reign saw appointments of senior bureaucrats and judges even if they were not of noble origin.
He signed the ‘Treaty of amity and commerce’ with the USA in 1785 thus recognizing a new independent nation.
The Berlin Academy which faced crisis for two decades was revived during his reign and by 1789 it gained international repute. 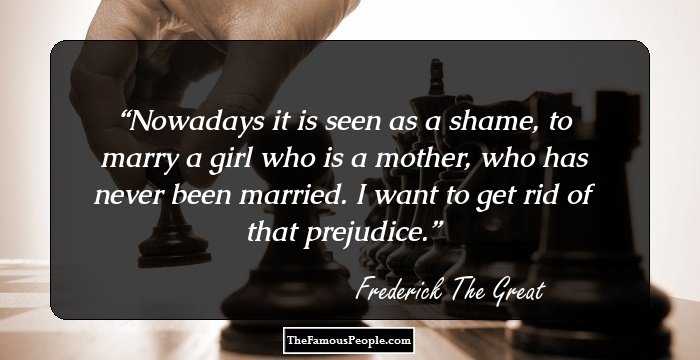 Quotes: Never, I
Personal Life & Legacy
Frederick William was persuaded by Prince Eugene of Savoy to marry off his son Frederick II with Elizabeth Christine of Brunswick-Bevern, a scion of a minor German princely family. Though he resented the political marriage, Frederick II reluctantly gave in to the marriage on June 12, 1733.
Although he hardly cared for his wife and categorically neglected her including preventing her to visit his court in Potsdam after he became the king in 1740, she always remained devoted to her husband. He granted her the ‘Schönhausen Palace’ and several apartments at the ‘Berliner Stadtschloss’.
He made his brother Augustus William ‘Prince of Prussia’, the heir to the throne.
On August 17, 1786 he died in his Sanssouci palace while sitting in armchair in his study room. Though his instructions were to bury him on the vineyard terrace of Sanssouci beside his greyhounds, his nephew and successor Frederick William II buried him in the Potsdam Garrison Church.
On August 17, 1991, marking his 205th death anniversary, his body was finally buried in the vineyard terrace of Sanssouci, complying with his last instructions.