Fleur Adcock is a New Zealand writer who has been one of the most influential poets in Britain for the past 30 years. Born in New Zealand, she left her country at the age of five when her family migrated to England. After receiving her early education from several schools there, she returned to her homeland and completed her graduation as well as post-graduation. She started her career as a teacher and librarian in her home country but later decided to move permanently to Britain where she held the post of a library assistant until she decided to dedicate herself to the task of writing. She began her literary career with a book of poems titled ‘Eye of the Hurricane’ and went on to produce many such spellbinding collections of poetry. She has written poems about the process of belonging and about the life in Britain. She has also edited and translated many books throughout her career. Her poetry is a display of technical precision which, together with its ironic, sarcastic tone captivates the readers and transforms reading into an engrossing experience. She has experimented with different voices and speakers in her works, moving away from direct observations and into an exploration of the unconscious. Her ability to combine inwardness with very tangible impressions makes her work unique and places her among the leading poets of Britain. 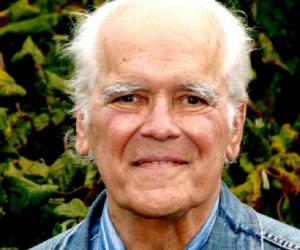 Elizabeth Barre...
Poets #1504
Writers #6570
Continue Reading Below
DID WE MISS SOMEONE?
CLICK HERE AND TELL US
WE'LL MAKE SURE
THEY'RE HERE A.S.A.P
Quick Facts

New Zealander People
Victoria University
Victoria University Of Wellington
Women Poets
Women Writers
Childhood & Early Life
She was born as Kareen Fleur Adcock on February 10, 1934, in Auckland, New Zealand, to Cyril John Adcock and his wife, Irene Robinson Adcock, a writer. Fleur has a sister, Marilyn Duckworth, who is also a writer.
In 1939, her family moved to England where she spent the most of her childhood. After the end of World War II, her family returned to New Zealand, in 1947, where she studied Classics from Victoria University at Wellington.
She obtained her graduate degree and went on to complete her post-graduation in 1956. 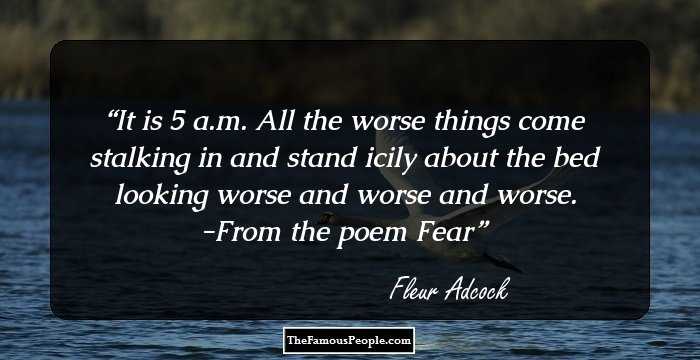 The Best Black Actresses Of All Time
Career
She started her career as an assistant lecturer in classics at the University of Otago in Dunedin, New Zealand and also served as the assistant librarian until 1961. The following year, she returned to Wellington to work in the Alexander Turnbull Library.
In 1963, she moved to England and took up a post as an assistant librarian at the ‘Foreign and Commonwealth Office’ in London. She also took two creative writing fellowships in UK; the first at ‘Charlotte Mason College of Education’ in Windermere and the other one at the universities of ‘Newcastle upon Tynne’ and ‘Durham’.
In 1964, her first poetry collection titled ‘Eye of the Hurricane’ was published in New Zealand, and since then she has written many collections of poetry, observing the world with a quiet incisiveness.
In subsequent years, she published several poetry collections such as ‘Tigers’ (1967), ‘High Tide in the Garden’ (1971). Her 1974 collection, ‘The Scenic Route’, is based on her relationship with her Irish ancestors.
Her 1979 poetry collection titled ‘The Inner Harbour’ is generally cited as her most artistically successful work. The book is divided into four sections and confronts the issues of love, death, and loss. In the final section, her poem reflects an acceptance and coming to terms with the losses that she experienced so far in her life.
Since 1979, she has worked as a freelance writer, producing her own poetry and translating and editing collections.
In 1986, she published two more poetry collections, ‘The Incident Book’ and ‘Hotspur: a ballad’.
Some of her later collections are ‘Time-Zones’ (1991), ‘Looking Back’ (1997), ‘Poems 1960–2000’ (2000), and ‘Dragon Talk’ (2010).
In addition to writing, she became a commentator on poetry for the ‘British Broadcasting Corporation’. She has also served as a translator of medieval-Latin and twentieth-century Romanian poetry.
Continue Reading Below
*She has edited several works as well, including ‘The Oxford Book of Contemporary New Zealand Poetry’ (1982), ‘Faber Book of 20th Century Women's Poetry’ (1987), and ‘The Oxford Book of Creatures’ (1995).
Awards & Achievements
In 1964, she was conferred with the ‘New Zealand State Literary Fund Award’.
She received the ‘Jessie Mackay Prize’ twice in her career, in 1968 and 1972.
She has also been presented with the ‘Buckland Award’ twice, in 1968 and 1979.
In 1976, she was awarded the Cholmondeley Award by the Society of Authors in the United Kingdom.
In 1984, she became a fellow of the Royal Society of Literature.
In 1996, she was named an Officer of the Order of the British Empire.
In 2006, she was awarded the ‘Queen's Gold Medal for Poetry’ in United Kingdom.
In 2008, she was conferred with the ‘Companion of the New Zealand Order of Merit’ for her services to literature.
Personal Life & Legacy
In 1952, she married Alistair Campbell, also a poet, whom she met in Victoria. She gave birth to two sons, Gregory and Andrew. The couple divorced in 1958.
In 1962, she married Barry Crump, a writer, but the marriage lasted for only a year as they got divorced in 1963. Subsequently she moved from New Zealand to England with her five-year old son Andrew, leaving Gregory with his father.
You May Like

See the events in life of Fleur Adcock in Chronological Order 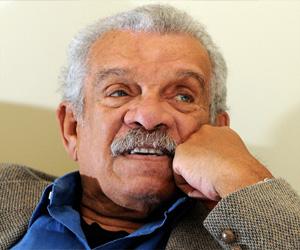