Sergey Brin is an American computer scientist and internet entrepreneur, who, along with Larry Page, co-founded Google Inc in 1998. Brin migrated to the U.S from the Soviet Union, at a young age. He studied mathematics and computer science in college before going to the Stanford University to pursue a PhD in computer science. As a research scholar, his areas of interests included extraction of information from unstructured sources, search engines, and data mining of large collections of data. He met fellow research scholar Larry page with whom he worked on a research project. The two men connected on the intellectual level and started experimenting with their new designs of search engines in the university computers. Initially, their project was called ‘BackRub’, and it was funded through the National Science Foundation. Together Brin and Page developed the PageRank algorithm, which is used by Google to rank web pages. The successful running of their project for many months on the University computers convinced the duo to start their own company. They both put their doctoral studies on hold and with financial investment in the form of a $100,000 cheque from Sun Microsystems co-founder, Andy Bechtolsheim, formally incorporated their company, Google Inc, in California. American People
Internet Entrepreneurs
American Men
Stanford University
Leo Scientists
Childhood & Early Life
Sergey Brin was born in Moscow to Jewish parents Michael Brin and Eugenia Brin. His father was a mathematics professor and his mother a researcher at NASA’s Goddard Space Flight Center.
His family migrated to the U.S when he was six as it was very difficult for Jews in Moscow to pursue higher education and follow the profession of their choice.
Brin attended Paint Branch Montessori School in Maryland. His father encouraged him to study mathematics at home.
After high school, he went to the University of Maryland to study mathematics and computer science and received his Bachelor of Science in 1993.
He enrolled for his graduate studies in computer science at Stanford University on the basis of a graduate fellowship from the National Science Foundation. 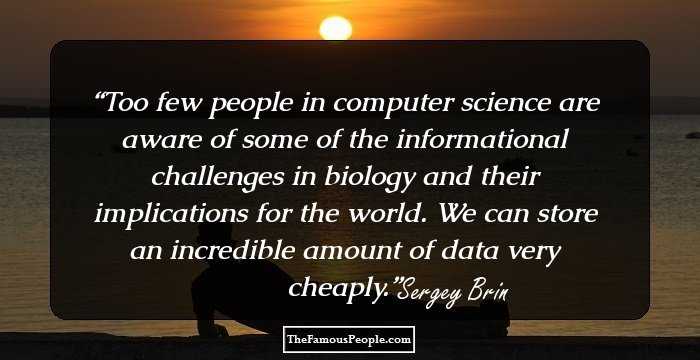 Continue Reading Below
Founding of Google Inc
The idea of Google originated when Sergey Brin was working with Larry Page on a research project for their thesis. Page was interested in exploring the mathematical properties of the World Wide Web, a concept that Brin also found attractive.
They began working together on the research project, called ‘BackRub.’ Initially, a web crawler was used to explore the web from the starting point of page’s Stanford home page.
Brin, along with Page, developed the PageRank algorithm. After analyzing BackRub’s output using this algorithm, they realized that a search engine based on PageRank would produce better results than the existing techniques.
They tested their hypothesis on their university’s computers with very good results. Their project ran on Stanford computers for many months. Originally, the project used the university’s website with the domain google.stanford.edu.
In 1997, they registered the domain google.com. The company was legally incorporated on September 4, 1998 at a friend’s garage in Menlo Park, California.
Andy Bechtolsheim, co-founder of Sun Microsystems, contributed the first funding to Google with a Cheque for $100,000.
By 1999, the company was operating with eight employees and had shifted their office to Palo Alto in California, an area more conducive to its growth. The office complex is known as ‘Googleplex.’
Over the next few years, Google launched many new features, acquired several other internet companies and entered into partnerships with other corporations to become one of the fastest growing internet companies in the world. 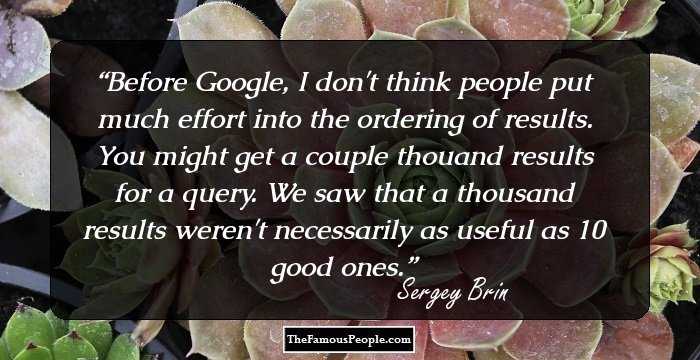 Continue Reading Below
Major Works
The formation of Google is Sergey Brin’s biggest accomplishment so far. The company that he co-founded from a garage in 1998 has witnessed tremendous growth and success within such a short period. Brin and Page have revolutionized the way the world searches for information online.
Google.org, the philanthropic arm of Google.Inc, was formed in 2004 to work in domains that affect the society at large. It develops technologies that help to address global issues like education, energy crisis, hunger management, etc.
Awards & Achievements
Brin, along with Larry Page, was named as among the top 100 innovators in the world under the age of 35 by the MIT Technology Review TR100.
Brin and Page received honorary MBA degrees from IE Business School "for embodying the entrepreneurial spirit and lending momentum to the creation of new businesses."
The Marconi Foundation Prize, regarded as the "Highest Award in Engineering” was bestowed upon Brin and Page in 2004, and they were elected Fellows of the Marconi Foundation at Columbia University.
In 2004, Brin was inducted into the National Academy of Engineering for "leadership in development of rapid indexing and retrieval of relevant information from the World Wide Web." 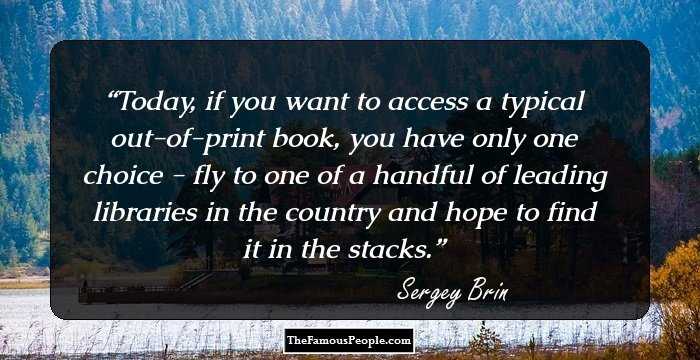 Personal Life & Legacy
Sergey Brin married 23andMe co-founder Anne Wojcicki in 2007. The couple had a son in 2008 and a daughter in 2011.
Sergey Brin's married life was rocked after he had an affair with Google Glass marketing manager Amanda Rosenberg. He and Anne started living separately in 2013 and finally divorced in 2015.
Sergey Brin and his ex-wife run The Brin Wojcicki Foundation, which donates money to various social causes.
Trivia
The name Google is a play on the word ‘Gogool’ which is the largest number (digit 1 followed by 100 zeros).
He possesses a mutation of the LRRK2 gene which increases his likelihood of developing Parkinson’s disease at a later age.
He and Larry Page co-own a customized Boeing 767–200 and a Dornier Alpha Jet
Recommended Lists:
Scientists #534

Quotes By Sergey Brin | Quote Of The Day | Top 100 Quotes

See the events in life of Sergey Brin in Chronological Order