Evan Peters is a well-known American film and TV actor. He has played supporting roles in popular TV shows, such as 'Phil of the Future' and 'Invasion.' He has also appeared in several films, including 'X-Men: Days of Future Past' as well as its sequel ‘X-Men: Apocalypse.’ Born in St. Louis, Missouri, in the United States, Peters aspired to become an actor from an early age. Along with pursuing modeling, he also attended local acting classes. His first film role was in the 2004 drama movie 'Clipping Adam' for which he won an award at the ‘Phoenix Film Festival’ for ‘Best Breakthrough Performance.’Over the years, along with his appearance in films and TV series, he has also appeared in numerous television commercials for ‘Sony PlayStation,’ ‘Progressive Insurance,’‘Moviefone,’ ‘Papa John's Pizza,’ and ‘The Kellogg Company.’ In 2011, he started appearing in 'American Horror Story,’ an anthology horror TV series, which can be regarded as his most significant work till date. His performance in the series has been appreciated. It has also earned him nominations for various awards. Evan Peters was born on January 20, 1987, in St. Louis, Missouri, United States, to Julie and Phil Peters. He has two siblings, a brother named Andrew, and a paternal half-sister named Michelle.

Peters first attended ‘Grand Blanc Community High School.’Soon, he moved to Los Angelesin order to pursue an acting career. He then attended ‘Burbank High School,’ but soon dropped out and turned to homeschooling instead. 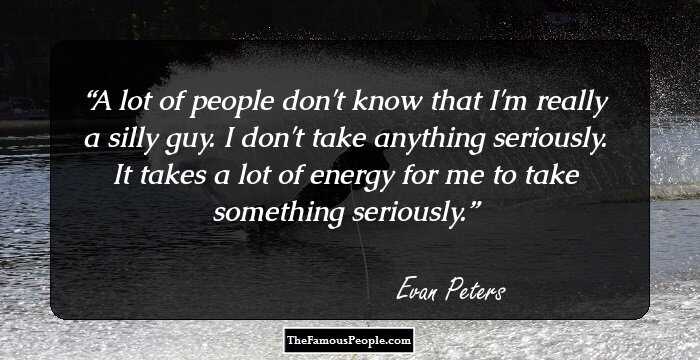 Evan Peters’ first role was in the film 'Clipping Adam' in 2004. His brilliant performance won him an award at the ‘Phoenix Film Festival’ for ‘Best Breakthrough Performance.’

Later, he appeared in the 2004 American teen film 'Sleepover,' which was directed by Joe Nussbaum. In the film, he portrayed ‘Russell Hayes’ who has a crush on the main character and wants to make her fall in love with him. Along with Peters, the film also starred actors like Alexa Vega, Sara Paxton, and Mika Boorem.

He then appeared in 'Phil of the Future,' an American science fiction series, that aired on Disney channel from 2004. The story revolved around a family that comes from the future, only to get stuck in the 21st Century due to the damage incurred to their time machine. In the series, Peters appeared as a nerdy kid named ‘Seth Wosmer.’ Other prominent actors in the cast include Raviv Ullman, Aly Michalka, and Amy Bruckner.

In 2005, he appeared in 'Invasion,' an American sci-fi television series,which aired on ABC network. Set in Florida, the story focuses on the aftermath of a hurricane in a small town where water-based creatures begin to take over the bodies of the town’s inhabitants. It also starred actors, such as William Fichtner, Eddie Cibrian, Kari Matchett, Lisa Sheridan, and Tyler Labine.

In 2011, he started appearing in a popular horror anthology series titled 'American Horror Story.' Each season of the show is shown as a new miniseries, with different stories and different characters. Apart from Peters, the show also starred actors like Connie Britton, Dylan McDermott, Taissa Farmiga, and Denis O'Hare.

In 2014, he appeared in the American superhero film 'X-Men: Days of Future Past.' Directed by Bryan Singer, it starred several popular actors, including Hugh Jackman, James McAvoy, Michael Fassbender, Jennifer Lawrence, Halle Berry, and Anna Paquin. In the film, Peters played a mutant named ‘Quicksilver’ whose superpowers include the ability to move, speak, and think in supersonic speed.

He played the lead role in the 2017 drama film ‘The Pirates of Somalia.’ In the film, he was seen alongside industry veterans Al Pacino and Melanie Griffith. The following year, he landed a recurring role in the FX drama series ‘Pose’ and a cameo in the superhero film ‘Deadpool 2.’

In 2019, he reprised his role as‘Quicksilver’ inSimon Kinberg's superhero film ‘Dark Phoenix.’ He was also part of the biographical drama film ‘I Am Woman.’ 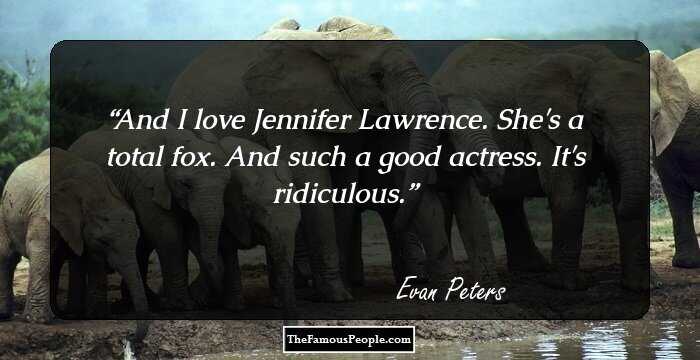 Evan Peters' role in 'American Horror Story,' a popular horror anthology series, can be regarded as the most significant work of his career. Though the series also starred several other popular actors, such as Connie Britton, Dylan McDermott, Zachary Quinto, Sarah Paulson, and Taisa Farminga, only three actors appeared in eight of nine seasons, Peters being one of them. Each season shows a different story with different set of characters and some of the stories are said to be inspired by true events. The showwas first broadcast on FX network in October 2011.

Evan Peters appeared in the 2015 American drama film 'Safelight,' which is one of the few significant films of his career. Written and directed by Tony Aloupis, the film starred Evan Peters and Juno Temple in lead roles, while Kevin Alejandro and Ariel Winter played supporting roles. The film premiered at the ‘Nashville Film Festival’ on April 17, 2015. Set in the 1970s, the story focuses mainly on the lives of a high school student named‘Charles,’ played by Peters, and a prostitute named‘Vickie,’ played by Temple.

He appeared in the 2016 American comedy film 'Elvis & Nixon.' Directed by Liza Johnson, the film starred Kevin Spacey and Michael Shannon in lead roles, while Peters, Johnny Knoxville, Colin Hanks, and Alex Pettyfer appeared in supporting roles. The story focuses on a meeting held between President Richard Nixon and singer Elvis Presley in December 1970. Unfortunately, the film did not do well commercially.

Evan Peters won his first award in 2004 at the ‘Phoenix Film Festival’ for ‘Best Breakthrough Performance’ for his debut film 'Clipping Adam.'

His role in the 2004 film 'Sleepover' earned him a nomination for 'Young Artist Award' under the‘Best Performance by an Ensemble Cast’ category. 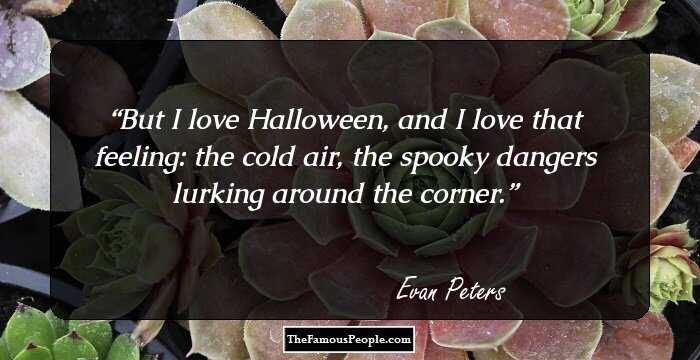 In 2012, Evan Peters started dating Emma Roberts with whom he co-starred in the 2013 film 'Adult World.' In 2013, Roberts was arrested for physically assaulting Peters after a heated argument. However, Roberts was released a few hours later, as Peters declined to press charges. Though the incident made headlines, the couple decided to look past the incident, and mended their relationship.

The couple announced their engagement in March 2014. However, they separated in early 2019. From 2019 to 2020, Peters was in a relationship with American singer-songwriter Halsey. He also dated actress Alexia Quinn in 2012.

Quotes By Evan Peters | Quote Of The Day | Top 100 Quotes

See the events in life of Evan Peters in Chronological Order