Errol Leslie Thomson Flynn was an Australian-American actor known for his action movies and playboy lifestyle. In his teens he tried multiple unsuccessful vocations in Australia, Papua New Guinea, and London and finally settled with acting. With his good looks and charisma he quickly became the undisputed king of swashbuckler films, a title previously held by Douglas Fairbanks. He was smart, dashing and athletic in reel-life and a notorious Casanova in the real one. Onscreen, his characters were freedom-loving, action-men who would not let injustice threaten them or their society, and in the process made the ladies swoon over them. But in reality, his life was marked by hard drinking, fighting and womanizing. His love-life was always controversial and it brought to him three wives, two statutory rape allegations and the lasting expression “in Like Flynn”. He is ranked among Hollywood's most popular and highly paid stars of the 1930s and 1940s, someone who inspired generation of aspiring actors from all the parts of the world. But the combination of hard-living, bad financial investments and controversies brought an abrupt end to his life in 1959 Liam Hemsworth
Actors #607
Film & Theater Personalities #1324
DID WE MISS SOMEONE?
CLICK HERE AND TELL US
WE'LL MAKE SURE
THEY'RE HERE A.S.A.P
Quick Facts

American Celebrities
Australian Celebrities
American Men
Australian Men
Tall Celebrities
Tall Male Celebrities
Childhood & Early Life
Errol Flynn was born on June 20, 1909, in Hobart, Tasmania, Australia, to Theodore Thomson Flynn and Marrelle Young. His father was a respected marine biologist.
He received his early education in Hobart and later on went to a private boarding school in Barnes, London. He was always a trouble-maker and a mischievous child and as a result he was expelled from a number of exclusive Australian and British Schools.
He got his first job as a junior clerk in a Sydney shipping company when he was 15. But he was ousted on the account of stealing cash.
At the age of 18, he went to Papua New Guinea and worked as a police constable, sanitation engineer, treasure hunter, sheep castrator, shipmaster for hire, fisherman, tobacco plantation worker and metal miner. 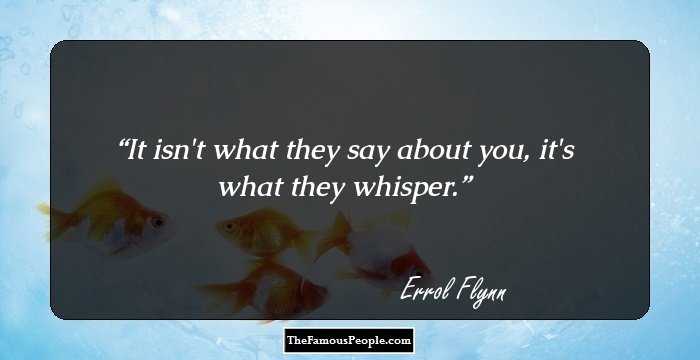 Who Is The Most Popular BTS Member?
Career
In 1933, Errol Flynn got his first film when an Australian film producer saw his portfolio and cast him in the lead role of Fletcher Christian in 'In The Wake of the Bounty', a low-budget documentary.
In 1934, he honed his acting skills by working at the Northampton Repertory Company and Warner Brother's Teddington Studio. Warner Bros then signed him and he went to America as a contract actor.
Flynn became an overnight sensation after his first film 'Captain Blood' in 1935. Immediately typecast as a swashbuckler, he gave a string of hits in the next six years. His hit movies during this era included: 'The Charge of the Light Brigade' (1936), 'The Prince and the Pauper' (1937), 'The Adventures of Robin Hood' (1938), 'The Dawn Patrol' (1938), 'Dodge City' (1939), 'The Private Lives of Elizabeth and Essex' (1939) and 'The Sea Hawk' (1940).
His on-screen romantic pairing with Olivia de Havilland became a huge hit and the two co-starred in eight films together during the 1930s and 1940s. These films were: 'Captain Blood' (1935), 'The Charge of the Light Brigade' (1936), 'The Adventures of Robin Hood' (1938), 'Four's a Crowd' (1938), 'Dodge City' (1939), 'The Private Lives of Elizabeth and Essex' (1939), 'Santa Fe Trail' (1940), and 'They Died with Their Boots On' (1941)
He became an American citizen on August 15, 1942 and was eligible for the military draft as the country was heading towards World War II. He attempted to join the force, but owing to his many health problems he was declared unfit.
After the World War II, the American audience found themselves attracted to films based on urban realism and film noir reflecting their modern lifestyle and lost interest in the genres of films Flynn excelled at so far.
He tried to evolve with movies like 'Uncertain Glory' (1944), 'Cry Wolf'(1947), 'Silver River'(1948) and 'Montana'(1950), but all proved to be box-office duds.
In 1950, Warner Bros released him from his contract and this marked the end of his Hollywood career.
In the 1950s, after losing his savings, he set out on his yacht, Zaca, sailing aimlessly around the Western Mediterranean. Heavy alcohol usage left him prematurely aged and overweight.
Continue Reading Below
Throughout the decade he continued working in films, theatre and television to pay his bills but could never get the same success, acclaim and fan-following. His narration in 'Cuban Story: The Truth About Fidel Castro Revolution' (1959) became his last work.
With the help of ghost-writer Earl Conrad, he wrote his final book 'My Wicked, Wicked Ways' in 1958 which was published posthumously. The book majorly focuses on the story of his life other than as a Hollywood actor. Flynn wanted to name the book ‘In Like Me’ but the publisher refused. 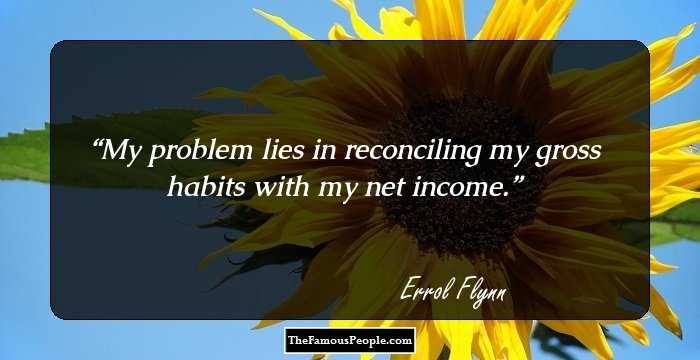 Quotes: Money
Awards & Achievements
In 1940, Variety magazine named him as the fourth most popular star in the US and the seventh most in Britain.
The UK based Empire magazine ranked him No. 70 on 'The Top 100 Movie Stars of All Time' list, in 1997, and No. 86 on the '100 Sexiest Stars in Film History'.
Personal Life & Legacy
Errol Flynn married thrice in his life. His first marriage was with actress Lili Damita, in 1935, and it lasted seven years. The couple was blessed with one son.
He married Nora Eddington in 1944 and had two daughters from the marriage. The couple divorced in 1949.
His third marriage was with actress Patrice Wymore, in 1950, and lasted till his death. The marriage produced one daughter.
In 1942, two under-aged girls accused him of statutory rape. The trial took place in 1943 and he was acquitted. Although he came out clear, the incident made a permanent dent on his idealized onscreen romantic-lead image.
In the late 1950s he met and courted Beverly Aadland at the Hollywood Professional School and cast her in his self-produced film 'Cuban Rebel Girls' (1959). Aadland stated that Errol Flynn wanted to marry her but passed away before this could happen.
His opium addiction and alcoholism wrecked his health. He suffered from many illnesses including myocardial infarction, coronary thrombosis, coronary atherosclerosis, liver degeneration, and liver sclerosis which ultimately led to his premature death at the age of 50 on October 14, 1959. 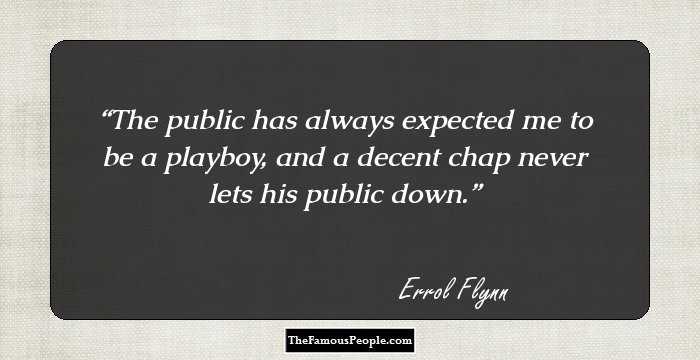 Trivia
When banned from drinking on a film set, he would inject oranges with vodka and eat them during his breaks.
Apart from his book 'My Wicked, Wicked Ways', which was published posthumously, he also wrote two other books. These included: 'Beam Ends' (1937), which as an autobiographical account of his sailing experiences as a youth around Australia, and an adventure novel named 'Showdown' (1946).

Quotes By Errol Flynn | Quote Of The Day | Top 100 Quotes

See the events in life of Errol Flynn in Chronological Order