Advanced Search
Emilie Livingston is a Canadian dancer, aerialist, and contortionist. She has also participated in the ‘Olympics’ as an accomplished rhythmic gymnast for Canada. She is also known as the third wife of veteran Hollywood actor Jeff Goldblum. She grew up in Ontario, Canada. As a child, she was pushed into physical activities such as dance and gymnastics by her mother. She started training in dance at the age of 2. By the time she was 6 years old, she had started training in gymnastics and ballet. Still a child, she moved to Russia for further training by world-renowned coaches. After she started participating in professional gymnastics, she became the Canadian national champion thrice and won the gold medal at the ‘Pan American Games’ in 1999. She honed her skills in acting and joined the ‘American Academy of Dramatic Arts’ in Los Angeles. She also appeared in a few films and music videos and acted as a body double for artists such as Rihanna and Emma Stone. After dating Hollywood actor Jeff Goldblum for a few years, she got married to him in 2014. The couple had two children in the years that followed. Ragan Smith
DID WE MISS SOMEONE?
CLICK HERE AND TELL US
WE'LL MAKE SURE
THEY'RE HERE A.S.A.P
Quick Facts

Canadian People
Women Gymnasts
Canadian Gymnasts
Women Sportspersons
Canadian Female Gymnasts
Childhood & Early Life
Emilie Livingston was born on January 4, 1983, in Etobicoke, Ontario. She was the second-born child of her parents. She grew up with her elder sister, who also happens to be a trained dancer.
When Emilie was 2 years old, she would often accompany her mother and her elder sister to dance classes. Her sister, who was 5 years old at that time, attended dance classes, and Emilie would sneak into her room when her mother would be in the changing room. Emilie’s unabashed love for dance became evident soon. Following her insistence, her mother enrolled her into ballet classes.
This was when Emilie’s love for stage, performing arts, and creativity began to shape up. She trained in dance for the next few years. She soon developed marked flexibility. She witnessed a creative gymnastics event in Toronto at the age of 6 and was mesmerized by it. It was an event to generate interest about rhythmic gymnastics in children. The gymnast who performed at the event eventually became Emilie’s first gymnastics coach.
This was also the time when Emilie came to know that the sport was not as popular in Canada as it should have been. She found it extremely fascinating and began her training. She was determined to represent her country at the ‘Olympics.’
Continue Reading Below
The Training & Early Career
By the time she was 11 years old, she had started performing at local gymnastics events. Her coach was then invited to Russia to train new talent there and asked Emilie to join her in Russia. Emilie’s mother did not allow her to travel to Russia initially. Emilie stopped eating for days in order to convince her mother to let her move to Russia.
Her mother eventually agreed, and Emilie flew down to Russia. For the next few years, she trained at Moscow’s ‘Novogorsk’ camp, where she received extremely hard training in ballet. She was also trained in creative gymnastics and apparatus techniques. The Bolshoi ballet trainers were extremely strict with her and the other children.
The intense training she received shaped her into a skilled gymnast. She received training in Russia until she was 20 years old.
Apart from dance and gymnastics, she also had an interest in other aspects of performing arts, such as acting. She enrolled at ‘The American Academy of Dramatic Arts’ in Los Angeles.
Professional Career
She started her rhythmic gymnastics career in her late teens, and before her dream of performing at the ‘Olympics’ became a reality, she had already made a huge name for herself in Canada. She won the gold medal thrice at the national championship in her country. This was her ticket to represent her country at the 1999 ‘Pan American Games.’
The games were held in Winnipeg, Manitoba. She performed exceedingly well at the event and ended up with a gold medal in the individual all-around competition. This win was extremely important for her, as it was her ticket to enter the 2000 ‘Sydney Olympics.’
She represented Canada in the ‘Olympics’ but failed to leave a mark. She was placed at the 18th spot in the individual all-around competition at the end of the competition. Disheartened by this result, she decided not to pursue her dreams of contesting at the ‘Olympics’ and moved to the US for a career in show business.
She had a moderately successful career in Hollywood. She was mostly hired as a body double for female actors performing difficult dance moves on screen. She got a chance to exhibit her dance skills in the music video of Justin Bieber’s song ‘Beauty and the Beat.’
Over the years, she has also been approached by many brands. Some of her biggest commercials have been for brands such as ‘Samsung,’ ‘Levi’s,’ ‘Fruit of the Loom,’ ‘Mercedes Benz,’ and ‘Neutrogena.’
Continue Reading Below
Currently signed with ‘Bloc Talent Agency,’ she has been part of stage circus for some time. She was one of the key parts of the ‘Cirque Berserk.’ She has also been associated with ‘Playhouse Hollywood’ in the past, first as a performer and later as its director.
She has also made several appearances in films, mostly as a body double. She was Rihanna’s body double in the film ‘Valerian and the City of a Thousand Planets.’ She appeared in a famous pole-dance sequence, which became the highlight of the film.
In 2016, she appeared in the ‘Academy Award’-winning film ‘La La Land.’ The musical drama film was full of dance sequences. Emilie performed some complex dance moves as the body double of the leading lady of the film, Emma Stone. She also performed as a body double in the film ‘Kroll Show.’
In 2010, she appeared in the series named ‘The LXD: The Legion of Extraordinary Dancers.’ The format of the series had two rival groups of dancers competing against each other. She has also performed with popular rapper Kanye West at ‘Coachella.’
Her performance was one of the main attractions at the ‘Google Zeitgeist,’ where Stephen Hawking was the main speaker. She also trains young talent from time to time.
Personal Life
Emilie Livingston has struggled with body-image issues almost all her life. She was initially short and thin and did not look fit. However, she proved her mettle by becoming the Canadian national champion thrice.
She met Hollywood star Jeff Goldblum at a gym, and they became friends soon after. Jeff invited her to one of his jazz performances at the Los Angeles club ‘Rockwell.’ There, he requested her to perform something similar to the dance sequence that Michelle Pfeiffer had performed in a scene from the film ‘The Fabulous Baker Boys.’ Emilie performed the dance on top of a piano and mesmerized everyone, including Jeff.
Jeff was known for dating much younger women and was a two-time divorcee. After a few years of being together, Jeff and Emilie got married in November 2014.
They have two sons: Charlie Ocean, born in July 2015 and River Joe, born in April 2017.

See the events in life of Emilie Livingston in Chronological Order 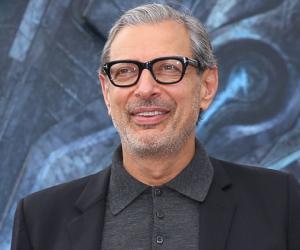