Advanced Search
She grabbed international recognition and affection by giving the world one of its most memorable moments in the history of sports – scoring the first-ever perfect ten on asymmetric bars, at the Montreal Olympic Games in 1976. To add to that, she went to score six more perfect 10s, thereby becoming the youngest all-around Olympic gold medalist, at just 14 years of age. Not only did Nadia Comăneci draw attention from all directions, but she also helped Romania find itself a place on the global map. This sporting icon stepped into spotlight by achieving an unachievable score, thus creating a legend and popularizing gymnastics as a sport across the world. Moreover, it changed the people’s perspective of female athletes. Such was her impact at the Olympics that the uneven bars event has two moves named after her – toe-on and release move, which are, till date, rated at a high difficulty level. Besides Olympics, she showed remarkable performance at the World Championships and European Championships as well, thus becoming a living legend and one of the best-known gymnasts the world could ever have. This ‘Queen of Olympics’ tried her hand at modeling and promoting sports equipment after her defection to the US. Steve Prefontaine
DID WE MISS SOMEONE?
CLICK HERE AND TELL US
WE'LL MAKE SURE
THEY'RE HERE A.S.A.P
Quick Facts

Romanian People
Romanian Women
Women Athletes
Women Gymnasts
Scorpio Athletes
Childhood & Early Life
Nadia Elena Comăneci was born on November 12, 1961, in the small town of Onesti in the Carpathian Mountains, to car mechanic Gheorghe Comăneci and factory worker Stefania-Alexandrina.
Her connection with gymnastics began while she was at kindergarten when she joined a local group Flacara (The Flame) and started training under Duncan and Munteanu.
At six years, she started attending world-renowned Romanian gymnastics coach Bela Karolyi’s experimental gymnastics school. 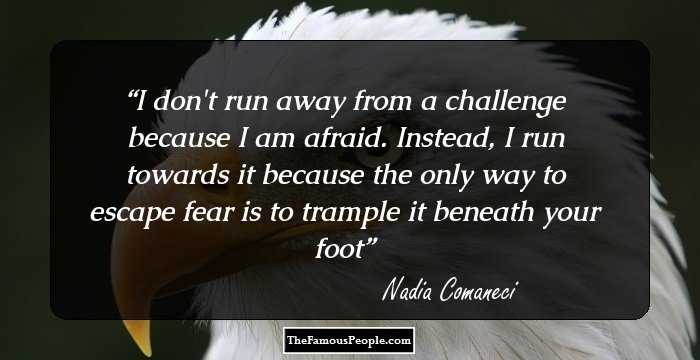 Quotes: Fear, I
Continue Reading Below
Career
In 1969, she took part in her first Romanian National Championships and finished at 13th position. The following year, she participated with her hometown team and became the youngest gymnast to win the Romanian Nationals.
Her first international competition came in 1971 where she won her first all-around title, helping her team win gold, in a dual junior meet between Romania and Yugoslavia.
She competed in various junior national contests and dual meets with neighboring countries, like Hungary, Poland and Italy, until she turned 13.
She first took to international fame in the Skein European Championships, in 1975, where she won gold in all events, except floor exercise, in which she won silver.
She excelled at the Romanian National Championships, clinching gold in the all-around, beam, vault and bars categories, held in 1975.
Apart from being the first Romanian gymnast to claim gold in the all-around event, she also became the youngest Olympic gymnastics all-around champion and holds the record till date.
She won her second European world title in the all-around event in 1977, but had to return home, along with her fellow gymnasts, due to controversies on scoring.
Her parents’ divorce and a changed coach affected her performance at the 1978 World Championships, in Strasbourg, finishing fourth on the uneven bars. However, she won a gold on beams and silver on vault.
In 1979, she claimed her third consecutive European all-around title, thus creating a record for being the first gymnast, male or female, to make such as achievement.
Continue Reading Below
Despite hospitalization for blood poisoning, she participated in the 1979 World Championships and helped her team win a gold medal. Later, she underwent a minor surgery on her infected wrist and took several days to recover.
In 1981, she was one of the Romanian gymnasts, along with coach Karolyi, who defected while touring the United States, after which she was not allowed to travel outside Romania.
In 1984, she officially retired from competition at a ceremony held in Bucharest, in the presence of the Chairman of the International Olympic Committee, and started coaching young gymnasts.
She defected with a small group of Romanians in 1989 and traveled through Hungary and Austria, before finally going to the United States. She became a US citizen in 2001.
She started promoting gymnastics apparel and aerobic equipment, and ventured into modeling, featuring in ads selling Jockey underwear and wedding outfits.
She released her memoirs-cum-mentoring book ‘Letters to a Young Gymnast’ in December 2003. 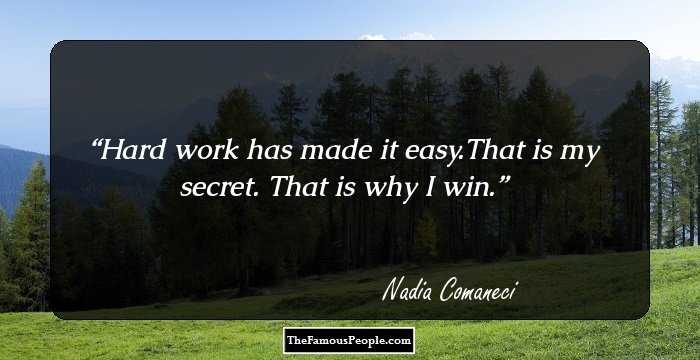 Quotes: I
Major Works
She shot to fame when she scored the first perfect 10 in the history of Olympic Games at 1976 Montreal Games. With seven perfect 10 scores, she displayed a phenomenal act winning three gold medals, one silver, and one bronze.
In 1980, she participated in the Moscow Olympics and performed exemplarily well, bringing home two gold medals – beams and floor exercise, and two silver medals – individual all-around and team competition.
Continue Reading Below
Awards & Achievements
The United Press International named her as the ‘Female Athlete of the Year’ in 1975 and 1976.
She was awarded the ‘BBC Personality of the Year’ in the overseas athletes category, in 1976.
In 1976, she was given the ‘Sickle and Hammer Gold Medal’ and named ‘Hero of Socialist Labor’ by the Romanian government.
In 1993, she was inducted into the International Gymnastics Hall of Fame.
She was honored with the prestigious ‘Olympic Order’ award by the International Olympic Committee two times, in 1984 and 2004.
In 1999, she was included in the list of ‘100 Most Important Women of the 20th Century’ by ABC News and ‘Ladies Home Journal’.
She was listed among the ‘25 Outstanding Sports People of the 20th Century’ in 1999, released by the International Association of Sports Writers.
She was awarded the ‘World Sports Award of the Century’ under the Women’s Award in Athletics and General Sports category, in 1999.
In 2000, she was the first athlete to voice her speech in the United Nations at the official launch of the International Year of Volunteers.
Continue Reading Below
She is the Honorary President of the Romanian Olympic Committee, Vice-Chair of International Olympics Committee, Vice President of the Muscular Dystrophy Association, and Honorary President of the Romanian Gymnastics Federation.
She is associated with various charity organizations and is the Member of the International Gymnastics Federation Foundation and Founding Member of the Laureus Sports Academy.
She is the only celebrity to enjoy her presence on the cover page of magazines - Times, Newsweek, and Sports Illustrated, all at the same time. 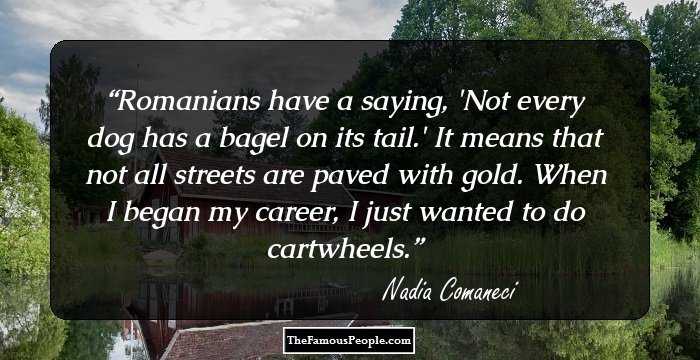 Quotes: I
Personal Life & Legacy
She got engaged to American gymnast, Baart Conner, a former Olympic gold medalist, in 1994. The two married in 1996 at an Orthodox church in Bucharest, Romania, and hosted a grand reception at the former presidential palace.
The gold-medalist couple gave birth to their only son, Dylan Paul Conner, in 2006, in Oklahoma City, Oklahoma.
The two own the ‘International Gymnast’ magazine, television production company ‘Perfect 10 Productions, Inc’, and gymnastics supplies company ‘Grips, Etc.’. Besides, they also run the ‘Bart Conner Gymnastics Academy’.
She provides donations and support to a school in her hometown in Onesti – Nadia Comăneci Gymnastics School.
She has opened Nadia Comăneci Children’s Clinic in Bucharest, offering free and economical medical and social services to Romanian kids.
Trivia
She was named after a Russian movie actress - ‘Nadezhda’ (or Nadya) meaning ‘hope’, which her mother watched while she was pregnant.
She didn’t possess a naturally flexible body, but her determination, strength and willpower helped her overcome obstacles and obtain a passport to fulfilling her dreams through gymnastics.

See the events in life of Nadia Comaneci in Chronological Order 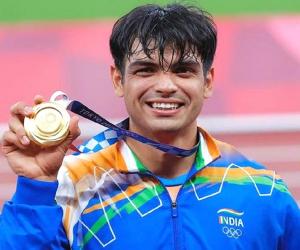