Emani Asghedom is the young daughter of the late rapper Nipsey Hussle. The celebrity offspring came at the center of attention following the brutal murder of her father. When images taken hours before the horrific incident suggested that Emani might have witnessed the shooting, she began to receive an outpour of support from her father’s fans. Before the tragedy struck her family, she was growing up as a normal child in her father’s family and was also going to school. Although her mother shared her custody with Nipsey, it was said that she was not able to provide a very stable environment to the young child. Following Nipsey’s death, a bitter custody battle has ensued between Emani’s mother and aunt. Earlier, Emani gained popularity after she accompanied her father to the ‘Grammy Awards’ and other musical events. However, Nipsey tried to keep her away from social media and rarely posted her images on Instagram. He did that to ensure her safety and normalcy in her growing up years. 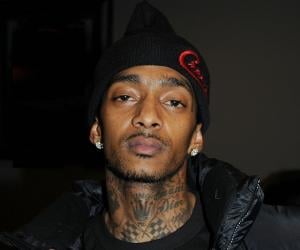 American People
Black Family Members
American Female
Rise to Stardom
Just like many other celebrity kids, Emani Asghedom happens to be famous by default. The youngster did not have to actively seek out media coverage to become well-known, as her popularity is the direct result of her father Nipsey Hussle’s dominance on the rap scene. His debut album ‘Victory Lap’, which released on February 16, 2018, was nominated for ‘Best Rap Album’ in the 2019 ‘Grammy Awards’. The recognition helped him become one of the best-selling rappers of 2018 – 2019. When Emani Asghedom accompanied him to the ‘Grammy Awards’, she became the center of attention, thanks to her style and innocence.
Even before her Grammy appearance, Nipsey’s fans were already familiar with Emani Asghedom. In fact, she had been enjoying the status of a famous celebrity kid for quite some time by then. It can be largely attributed to the candid family images posted by her mother Tanisha Foster Asghedom or ‘Chyna Hussler’ on her social media accounts. Her mother chronicled Emani’s journey on social media right since she was a small baby, and Nipsey’s fans virtually saw her grow up right in front of their eyes. Tanisha’s posts featuring Emani helped the youngster get millions of fans. It is unclear whether Nispey and Tanisha ever got married, but they publicly broke up in 2013 and got embroiled in a custody battle for Emani. Ultimately, her mother was awarded her custody during the weekdays, while Nipsey was allowed to spend time with her on weekends.
Emani found her own fan following as her father’s success continued to grow in the music industry. She also received some negative attention after her mother got involved in a bitter online rivalry with Nipsey’s new girlfriend and actress Lauren London. Tanisha infamously tweeted that Nipsey was still in love with her, and that she and Emani were the only things that made the rapper smile. Despite the online drama involving her family, Emani was growing up normally, largely due to her father’s guidance. But life took a turn for the worse on March 31, 2019, when her father Nipsey Hussle was shot dead by Eric Holder aka ‘Shitty Cuz’ in the parking area of his ‘Marathon Clothing’ store in South Los Angeles.
As the horrific details of the event unfolded, an image posted on social media suggested that Nipsey was with his children merely hours before his death. Further details revealed that Emani might have been a witness to the shooting, although it has not been verified by the Los Angeles Police Department. The tragic event resulted in a flood of emotional messages from fans who expressed their support for Nipsey’s children. Emani attended her father’s memorial service on April 11, 2019, at the Staples Center, but her mother was not invited.
After her father’s demise, Emani Asghedom is once again making headlines. This time, her aunt Samantha Smith secretly filed for Emani’s custody without informing her mother Tanisha. Samantha filed the case to “ensure that she (Emani) can continue to live with family members with whom she has always had close ties”. This fresh twist in her custody case has raised many questions, as there is already a custody arrangement between her brother and Emani’s mother. Furthermore, her plea has caused an outrage on social media, as many people think that Samantha wants to become Emani’s legal guardian to benefit from her inheritance worth millions. Emani has since been kept away from the media glare to ensure her safety.
You May Like

Famous Beautiful Women With Green Eyes
Continue Reading Below
Family & Personal Life
Emani Asghedom was born in 2011 in Los Angeles, California, USA. Her father is the rapper Nipsey Hussle, while her mother is called Tanisha Asghedom. Emani has a half-brother named Kross Asghedom from Nipsey’s girlfriend Lauren London. Kross was born on August 31, 2016 in Los Angeles. Emani’s school and personal details have not been revealed to the media due to security reasons. Her net worth is estimated to be in millions, which is largely inherited from her father.