Billie Holiday was an American jazz musician, singer and song writer. Originally named Eleanora Fagan, she adopted pseudonym Billie Holiday from actress Billie Dove who she admired and her father Clarence Holiday. Her ground breaking melody, soulful voice and capability of creating music from anything and everything made her a famous jazz diva of her time. Lester Young, her friend as well as music partner, nicknamed her ‘Lady Day’. The music marvel that she was, Billie Holiday became a sensation in jazz music during 1950s. This remarkable musician is still remembered for her vocal style, creative brilliance, improvisation and verve in jazz music. Her masterpieces are equally popular today among jazz lovers as were in earlier decades. She had a flourishing career path for years until she gave in to her battle against drug addiction. The film ‘Lady Sings the Blues’ was based on her autobiography. A spectacle of her time, she was inspired by Louis Armstrong and Bessie Smith. Holiday is considered as one of the most peerless voices in jazz music till date. Her last major album ‘Lady in Satin’ was conducted by Ray Fills and features an orchestra encompassing 40 musicians Loretta Lynn
7th April In History
DID WE MISS SOMEONE?
CLICK HERE AND TELL US
WE'LL MAKE SURE
THEY'RE HERE A.S.A.P
Quick Facts

American Celebrities
Black Singers
Jazz Singers
Black Musicians
Jazz Musicians
Childhood & Early Life
Billie Holiday was born in Philadelphia on April 7, 1915 to Sarah Juliah and Clarance Holiday who were neither married nor living together.
She faced a challenging childhood. Her father, who was a jazz guitarist, left them to pursue career in music. Her mother Sarah had to keep Billie in Baltimore at Eva Miller’s house who was Sarah’s half sister. The first ten years, she was mostly raised by Martha Miller, mother-in-law of Eva.
On January 5, 1925, a juvenile court sent her to Catholic reform school ‘The House of the Good Shepherd’ due to her truancy in school.
On December 24, 1926, her neighbour Wilbur Rich attempted rape on her. She was sent to protective custody of ‘House of the Good Shepherd’.
Her mother left for Harlem in New York in 1928, leaving her with Martha Miller. She joined her mother in Harlem in 1929, who by that time had become a prostitute. Within no time, Billie also began working as a prostitute even before the age of 14.
The brothel was raided on May 2, 1929 when both of them were taken into custody. While her mother was released in July, she was released in October. 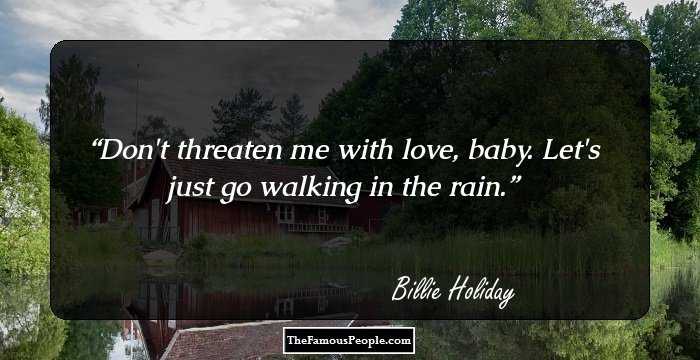 Black Jazz Singers
Lyricists & Songwriters
Black Jazz Musicians
Black Lyricists & Songwriters
Career
Billie Holiday started her music career in 1929 with neighbour Kenneth Hollan. During 1929 to 1931, they performed at various clubs including ‘Brooklyn Elks’ Club’, ‘Grey Dawn’ and ‘Mexico’s’.
In 1932, she was inducted at a club at West 132nd Street replacing singer Monette Moore where Producer John Hammond heard her.
In November 1933, he voice was recorded for the first time under the arrangement of John Hammond. Her two songs along with Benny Goodman were released on November 11. One of them, ‘Riffin' the Scotch’ was an instant hit and saw a whopping sale of 5,000 copies.
In 1935, she played a part in musical short ‘Symphony in Black: A Rhapsody of Negro Life’ starring Duke Ellington. It featured her in a song ‘Saddest Tale’ sung by her. She signed with ‘Brunswick Records’ and collaborated with Teddy Wilson to record pop music in swing style. Their first record ‘What a Little Moonlight Can Do’ gave her recognition as an artist.
From 1936 to 1938 she, along with Teddy Wilson, appeared in a series of phenomenal performances co-produced by Bernie Hanighen and John Hammond. Tunes like ‘Twenty-Four Hours a Day’ were turned into jazz classics by the two singers.
Billie Holiday had a brief encounter with jazz pianist Count Basie in 1937 when she joined a band as vocalist. The band moved from one city to other performing one-nighters in different clubs.
In 1938 she became first black woman to team up with a white orchestra when she was hired by Artie Shaw. In March 1938, they both were broadcast on WABC now WCBS, famous radio station in New York. ‘Any Old Time’ was the only song she could record with Shaw.
In 1939 she performed ‘Strange Fruit’ in ‘Cafe Society’, a nightclub. She subsequently recorded it for ‘Commodore Records’ and later for ‘Verve”. It eventually became a big hit.
Songs that she performed with Teddy Wilson during the 1930s were recorded in 1944 by Commodore. She also recorded her version of ‘Embraceable You’, which was inducted in the ‘Grammy Hall of Fame’ in 2005.
Continue Reading Below
In September 1946, she starred in a film, ‘New Orleans’, opposite Woody Herman and Louis Armstrong. The track ‘The Blues Are Brewin’ was recorded by her.
She had several music releases from 1949 till 1959 including full length albums. Her October 1949 recorded song ‘Crazy He Calls Me’ for ‘Decca’ was counted as her most successful rendition. Her autobiography ‘Lady Sings The Blues’ was published in 1956 by Doubleday. Her final album ‘Billie Holiday’ was released with MGM in 1958. American Women
Pennsylvania Musicians
Aries Singers
Women Singers
Major Works
Her first record with Teddy Wilson ‘What a Little Moonlight Can Do’ became a trend setter in jazz music.
In 1941, her song ‘God Bless the Child’ became a major hit, selling millions of records. It reached 25th rank in the charts and was placed in the third position as song of the year in Billboard.
Pop hit ‘Lover Man (Oh Where Can You Be)’ specifically written for her is till date her highest charted hit.
Recommended Lists:

Aries Musicians
Women Musicians
American Singers
American Musicians
Personal Life & Legacy
On August 25, 1941, Billie married Jimmy Monroe, a trombonist but divorced him in 1947.
She married Louis McKay on March 28, 1957, who was a Mafia enforcer but separated later. Though issueless, Bevan Dufty and singer Billie Lorraine Feather were her two godchildren.
On July 17, 1959 she died in New York due to cirrhosis of liver and was buried in Bronx County, New York at Saint Raymond’s Cemetery.
She was arrested in NY on May 16, 1947, for possessing narcotics and sentenced to ‘Alderson Federal Prison Camp’ at West Virginia. She was released early due to good behaviour on March 16, 1948. .
She was arrested on January 22, 1949, at San Francisco's Hotel Mark Twain. Quotes By Billie Holiday | Quote Of The Day | Top 100 Quotes

See the events in life of Billie Holiday in Chronological Order