Cab Calloway is remembered as a singer, bandleader, actor, author, and composer. During the heyday of the Harlem Style in the 1920s and 30s, Calloway reigned supreme alongside performers such as Louie Armstrong and Duke Ellington. While growing up in Maryland he was expected to follow in his father’s footsteps and study law, he instead followed his passion for music. After moving to Chicago, Cab found work as a singer and enjoyed some fame for a few years. An unsuccessful gig in New York City led him to dissolve the existing band and form another. The change paved the way for success in New York and ultimately a long-standing engagement at the Cotton Club, where Calloway evolved his flamboyant style and established himself as a household name. He continued to perform at clubs and popularized jitterbug music, and the “scat” singing style. Several of his songs became hits, with the unforgettable “Minnie the Moocher” among his crowning accomplishments. He performed on the stage and films for many years. During his career, he enjoyed the adoration of a diverse audience which realized that his brand of energy, charisma, and talent comes along only once in a while

American Celebrities
African American Actors
African American Singers
African American Dancers
Black Singers
Childhood & Early Life
He was born on December 25, 1907 to Martha Reed and Cabell Calloway, Jr. in Rochester, New York. His family relocated to Baltimore, Maryland, where his mother worked as a teacher and his father as a lawyer.
In 1922, his parents arranged for him private voice lessons. Although his parents and his voice teacher discouraged him from listening to and singing jazz, he began to frequent speakeasies and jazz clubs in 1924.
In 1925, he played drums and sang with a jazz combo at several clubs in Baltimore. He also performed in several revues and musicals at his high school and local theater.
He excelled at sports in his high school, and played basketball with the Negro Professional Basketball League on the “Baltimore Athenians” in 1926.
His elder sister, Blanche Calloway, lived in Chicago and was enjoying great success as a singer and bandleader. She helped her little brother land his first job as a performer after he graduated from Frederick Douglass High School in 1927. He often credited her for inspiring him to start a career in show business. 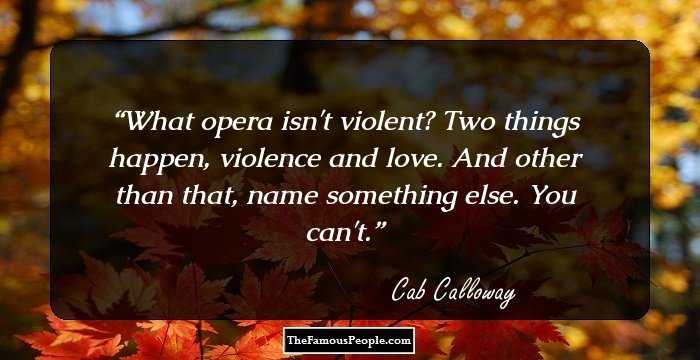 Quotes: You, Love
Continue Reading Below
You May Like

Who Is The Greatest Female Warrior In History?
Career
He graduated from high school in 1927 and joined his sister in a summer tour of “Plantation Days” in Chicago.
He landed his first nightclub gig in 1928, playing the drums and singing at the “Dreamland Café.” It propelled him to the next steady gig at the “Sunset Café”, where he performed with Louie Armstrong and Carroll Dickerson.
In 1929, when Armstrong and Dickerson left for New York City, he took over as bandleader of the “The Alabamians.” He quit the law course he was taking at Crane College to pursue his music career. He toured with his band and ended the tour at the “Savoy Ballroom” in Harlem. He was so popular with the crowds, that he accepted an offer to become bandleader for “The Missourians."
In 1930, he agreed to be the house band at the “Cotton Club” while Duke Ellington was on tour. His success led him to remain and lead a co-house band. NBC taped a twice weekly radio show at the Cotton Club and it propelled him to further fame. He and Ellington had effectively broken through the unspoken color barrier of broadcasts.
In 1931, he wrote and recorded his most famous song, “Minnie the Moocher.” This recording more than any other would prove to typify his fame, and he later came to be known as “The Hi De Ho Man.”
He recorded songs for a series of Betty Boop animated shorts between1932 to 1933. He continued to perform and record with his band Cab Calloway and his Orchestra.
He appeared in his first full-length movie, “The Singing Kid” in 1936 alongside Al Jolson. The movie served as a small but significant effort at more equal portrayals of African-Americans.
The next seven years he continued to tour and record extensively with various labels.
In 1943, he appeared in the movie, “Stormy Weather”, notable for being the first movie starring an all-black cast.
Continue Reading Below
In 1944, he published a book called “The New Cab Calloway’s Hepsters Dictionary: The Language of Jive,” in which he translated jive language for fans.
In the late 1940s, his poor financial decisions and longstanding problems with gambling caused a break-up of his band.
He returned to stage in 1952 in a production of Porgy and Bess. His well-received role as “Sportin’ Life” launched him back into performances in various productions.
In 1976, he published his autobiography, “Minnie the Moocher and Me.”
In 1980, he performed “Minnie the Moocher” in the “The Blues Brothers” movie. This performance was a re-launch for him and he worked in films and stage for the next decade.
Until his death in 1994, he enjoyed retirement at a community in northern, Delaware. 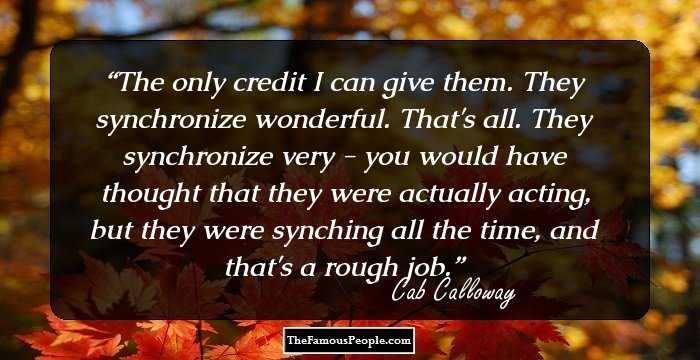 Quotes: You, Time
Major Works
During his long career, he produced a huge discography. Among the more notable works are 1931’s “Minnie the Moocher,” 1934’s “Moon Glow,” 1939’s “The Jumpin’ Jive,” and 1941’s “Blues in the Night.” These hits established the style of scat and jazz in a way that reverberated throughout the era.
His more notable movie credits include “The Big Broadcast” in 1932, “The Singing Kid” in 1936, and “Stormy Weather in 1943. His appearances served to further break down discrimination toward black actors.
Continue Reading Below
His “The New Cab Calloway Hepsters Dictionary: The Language of Jive” legitimized the language that surrounded the jazz culture of the time.
Awards & Achievements
In 1993, he received the National Medal of Arts for his contribution to American music. The same year he was presented with an honorary doctoral degree from the University of Rochester.
In 1998, The Cab Calloway Orchestra was formed to honor his legacy. 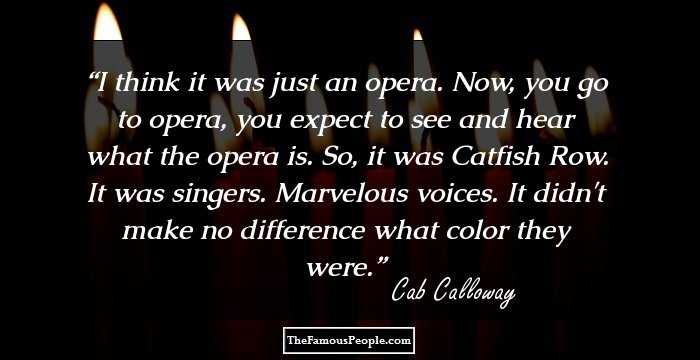 Quotes: You, Think
Personal Life & Legacy
He fathered a child with Zelma Proctor in 1927. He married Betty Conacher in 1928 but they remained childless.
He met Zulme MacNeal and fathered three children with her in 1945, 1949, and 1952. The children were Chris, Lael, and Cabella respectively.
He suffered a severe stroke and died on November 18, 1994 in Hockessin, Delaware.
He was a larger than life figure who led one of the greatest bands of the swing era. He entertained audiences and broke through barriers in a career that has been immortalized in popular culture.
Trivia
In 1941, he and his band had their very own radio program called Cab Calloway’s Quizzicale. The show had a brief run as he could find a sponsor.
This famous jazz singer once said, “The only difference between a black entertainer and a white entertainer is that my ass has been kicked a lot more and a lot harder because it’s black.”

Quotes By Cab Calloway | Quote Of The Day | Top 100 Quotes

See the events in life of Cab Calloway in Chronological Order 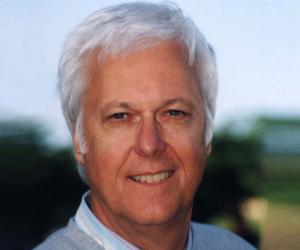