In the history of powerful women of the Middle Ages, Eleanor of Aquitaine deserves a rightful place. As the Duchess of Aquitaine, she served as the Queen of France (1137–1152) and Queen of England (1154–1189). Furthermore, she lived to see her two sons, Richard I and John, serve as the King of England in their respective tenures. Eleanor was the eldest daughter of the Duke of Aquitaine. Following his untimely death, she inherited the expansive Dukedom of Aquitaine and in turn became the most eligible bride of Europe. In 1137, she married King Louis VII and later became the Queen of France. Personal differences and inability to produce a male heir led to the annulment of her marriage. However, she soon wedded Henry I and became the Queen of England. Unlike former Queens and her contemporaries, Eleanor was extremely bright, intelligent and strong willed. She took part in the administrative and government reforms. Even after being Queen Dowager, she acted as a regent during her son, King Richard I’s absence and administered much of the proceedings. She actively contributed during her second son, King John’s tenure as well. It was only in her final years that she retired from public life as a nun Henry the Young...
DID WE MISS SOMEONE?
CLICK HERE AND TELL US
WE'LL MAKE SURE
THEY'RE HERE A.S.A.P
Quick Facts

British People
French People
French Women
French Empresses & Queens
British Empresses & Queens
Women Historical Personalities
Childhood & Early Life
Eleanor of Aquitaine was born to William X, Duke of Aquitaine and Aenor de Châtellerault. Though the exact year and place of birth is unknown, it is speculated that she was born on either 1122 or 1124 in Poitiers, Bordeaux, or Nieul-sur-l'Autise.
A well-educated and well trained young girl, Eleanor excelled at studies, domestic skills, games and extra-curricular activities. Additionally, she was proficient in music, literature, riding, hawking, and hunting.
Tragedy struck Eleanor early in life as her mother and younger brother passed away in the spring of 1130. Following their death, she became the eldest legitimate heir to her father’s domain, followed by her younger sister Aelith. 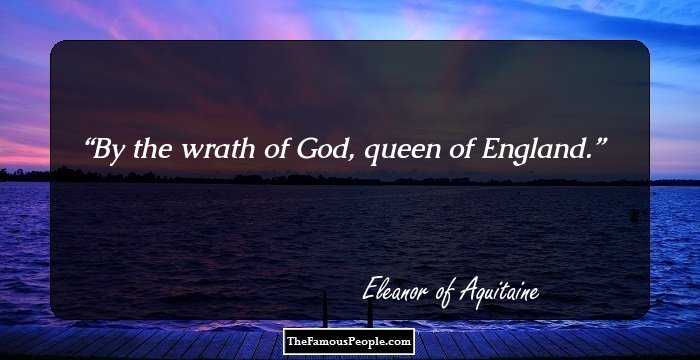 Quotes: God
Continue Reading Below
Later Life
In 1137, Eleanor and her sister accompanied their father to Bordeaux. While the Duke left for the Shrine of Saint James of Compostela, the two sisters stayed under the guardianship of Archbishop of Bordeaux.
Unknown circumstances led to the death of the Duke of Aquitaine on April 9, 1137. Following his death, Eleanor took over as the Duchess of Aquitaine. However, the real governance lay under King Louis VI of France, her legal guardian.
Until Eleanor was married, King Louis VI had the legal right to Eleanor's lands. Lured by the greed to increase the power and prominence of France by taking complete control of the most desirable dukedom in France, King Louis VI immediately arranged a marriage between his son and heir apparent, Prince Louis and Duchess of Aquitaine.
Following her marriage to Prince Louis, the couple was enthroned as Duke and Duchess of Aquitaine. However, with the death of King Louis VI, Prince Louis and Eleanor were anointed and crowned King and Queen of France on December 25, 1137.
Queen Eleanor’s strong willed and high spirited nature did not go too well with the French public. She was constantly rebuked and criticized by King Louis’ mother and church elders and labelled as flighty woman with a bad influence.
From 1147 to 1149, she accompanied her husband on the Second Crusade, travelling to Jerusalem to protect it from the Turkish assault. During the expedition, her demeanour and conduct deeply irked King Louis and aroused in him a sense of jealousy and distrust.
Eleanor’s failure to produce a male heir worsened her already deteriorating marriage to King Louis. The barons too favoured the annulment which finally realized on March 21, 1152. King Louis promised to restore Eleanor’s lands.
Following her separation from King Louis, she regained the possession of Aquitaine and with that her title of Duchess of Aquitaine as well. In May 1152, she married the grandson of Henry II of England, Henry Plantagenet, Count of Anjou and Duke of Normandy. Two years later, they were crowned King and Queen of England.
As the Queen of England, Eleanor actively participated in the administrative and governmental proceedings of Henry’s empire. She travelled far and wide, between England and France.
Continue Reading Below
She played an instrumental role in turning the Court of Poitiers into a centre of poetry. Through the court, she aimed at setting up a model for courtly life and manners. The Court acted as a catalyst for increasing the popularity of courtly love literature.
In 1173, disgruntled with limited powers, Henry’s second son Henry the Young launched the Revolt of 1173–1174 along with his brothers; Geoffrey and Richard I. Queen Eleanor who was unhappy with King Henry II’s infidelities instigated the revolt further by giving her sons the required military support. However, the revolt failed and Queen Eleanor was held in captive.
From 1173 until King Henry II’s death in 1189, she was kept under semi-imprisonment. She always had a custodian upon her and was not allowed to meet her sons.
Following the death of King Henry II, Richard I took up the chair of the King. He ordered for Eleanor’s release. Upon her release, she played a greater political role than ever before, ruling England under Richard I’s name.
She served as the substitute during King Richard I’s Crusade to the Holy Land and played a crucial role in negotiating the ransom for his release after he was abducted by the Duke of Austria. Furthermore, she thwarted any conspiracy behind his back.
In 1199, Richard I died without any male heir. Resultantly, her youngest son, John was crowned as the King of England. Fearing breakdown of the Plantagenet domain, Eleanor was employed as the envoy to France. She travelled to Castile to fetch her granddaughter Blanche and marry her to the son of the French king. This, she hoped, would ensure peace between the English and French.
She supported King John’s rule against the rebellion of her grandson Arthur and successfully defended John’s French possessions of Anjou and Aquitaine. Her campaign at Mirebeau marked her last political activity before retiring as a nun at the monastery at Fontevrault, Anjou. 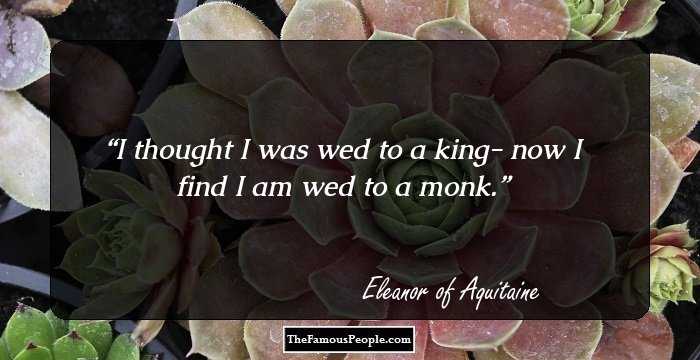 Quotes: I
Personal Life & Legacy
Eleanor was first married to Prince Louis VII, heir apparent of the French throne on July 25, 1137 in the Cathedral of Saint-André in Bordeaux by the Archbishop of Bordeaux. Immediately thereafter, the couple was enthroned as Duke and Duchess of Aquitaine.
King Louis VI’s passed away on August 1, 1137. Following his death, Prince Louis VII and Eleanor were anointed and crowned King and Queen of France on December 25, 1137. The couple was blessed with two daughters.
Strife between the two and Eleanor’s inability to produce a male heir led to her separation with King Louis VII. Their marriage was annulled in 1152. Two months later, she married Henry Plantagenet, Count of Anjou and Duke of Normandy. In 1154, the two were anointed and crowned the King and Queen of England.
As the Queen of England, she gave birth to five sons and three daughters. She lived to see her sons, Richard I and John serve as the King of England.
She died on April 1, 1204. She was buried in Fontevraud Abbey next to her husband Henry II and her son Richard.
Eleanor has been represented numerous times in popular cultures, through plays, novels, features, documentaries and so on. There are a number of films, television series and books that have been dedicated to her.