Edwin Herbert Land was born to relatively poor parents in a small town in New England. Although neither of his parents were formally educated, Land began studying optics and the polarization of light from a young age. After attending and graduating a prestigious high school, he briefly enrolled in an elite university before dropping out to pursue a business project. Continuing to work on his research into the polarization of light, he ultimately impressed his former professors, who welcomed him back to continue his research. After several hard years of experimentation, Edwin managed to perfect an industrial process for polarized sheets. When big Wall Street industrials were convinced of the potential of Herbert's ideas, they helped him found one of the most successful American companies in history. He continued his work as a scientist in the company, helping to develop the world's first instant camera. Edwin also collaborated with the military during the war to help improve reconnaissance techniques and long-distance photography. After more than 40 years of working to improve and develop optics, Herbert retired and then founded his own research institution. After a lengthy life and distinguished career, this famous inventor passed away of natural causes, heralded by the public as a scientific and entrepreneurial genius Herman Hollerith
Inventors & Discoverers #86
DID WE MISS SOMEONE?
CLICK HERE AND TELL US
WE'LL MAKE SURE
THEY'RE HERE A.S.A.P
Quick Facts

American Celebrities
American Inventors & Discoverers
Taurus Men
Childhood & Early Life
Edwin Herbert Land was born on May 7, 1909 in Bridgeport, Connecticut. His mother was Martha Land, and his father was Harry Land, who owned a scrap metal yard.
As a young man, Edwin attended the ‘Norwich Free Academy’ in Norwich, Connecticut, where he graduated in 1927. 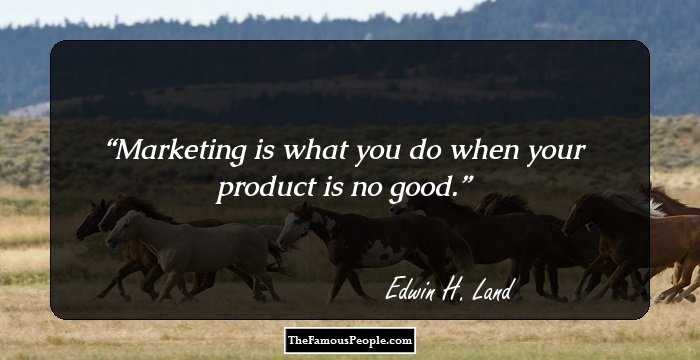 The Hottest Male Celebrities With The Best Abs
Career
In 1926, Land was accepted into ‘Harvard University’, where he studied chemistry. After two months, he dropped out of school, eager to pursue a business idea concerning polarized light.
He began studying optics in the ‘New York Public Library’ and conducting his own experiments in a basement laboratory in ‘Columbia University’.
In 1929, he returned to Harvard after convincing the head of the physics department to give him his own lab. Edwin’s mission was to perfect a sheet polarizer for industrial production processes.
In 1932, he found a business partner in George Wheelright, who had been Land's physics instructor at Harvard. After the company began developing polarizing filters for sunglasses, Wall Street investors agreed to help finance the company.
In 1937, the corporation, originally named ‘Land-Wheeliwright Laboratories’, changed its name to the ‘Polaroid Corporation’. Herbert continued to develop sheet polarizers for the company.
By 1942, Polaroid had created color animation for jukeboxes, 3-D glasses for movies, and the ability to dim light coming through a window.
During World War II, Land worked with the American military to develop and improve optics connected to reconnaissance, and helped worked on both the U-2 spy plane and later space satellites. His techniques helped the government take long-distance photographs.
In 1948, after five years of research and testing, this renowned scientist’s newly-invented "instant" photography set for Polaroid went on sale, available in sepia tones only. It was called the 'Land Camera' after its inventor.
In 1950, Polaroid released the first "instant" camera that used black and white film. It became popular both for military as well as for civilian photography purposes.
Continue Reading Below
In 1957, ‘Harvard University’ awarded Edwin an honorary doctorate, the same individual who had dropped out of the school over 25 years earlier. In the same year, he was appointed as a member of the President's ‘Science Advisory Committee’, a job he would hold for three years.
In 1961, he was appointed as a member of the President's ‘Foreign Intelligence Advisory Board’, a position he would hold for the next 16 years. Part of his job was to counsel the president on the military capabilities of America's enemies.
In 1963, Polaroid released the first "instant" camera that used color film.
In 1968, Land encouraged Polaroid to support the civil rights movement and as a part of this initiative he hired people belonging to the minority groups in his company.
In 1980, this visionary scientist resigned as Chairman of Polaroid after more than 40 years with the company.
After retiring, he founded the ‘Rowland Institute for Science’ to continue research work on optics. His laboratory eventually discovered how color is perceived in the human brain. 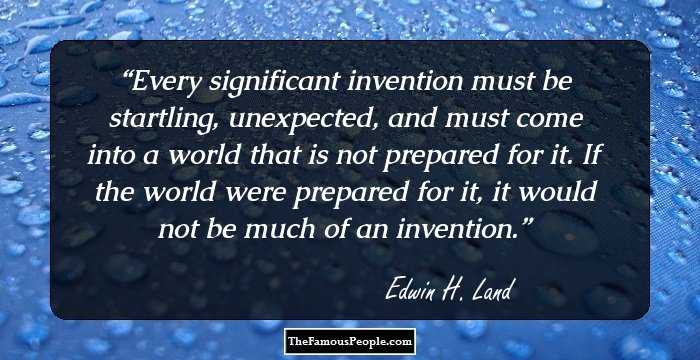 Major Works
Although Edwin Herbert Land was an accomplished scientist, he is best known for being one of the co-founders of the Polaroid Corporation. His invention of instant cameras paved the way for modern day photography.
Awards & Achievements
This renowned inventor was awarded the ‘Presidential Medal of Freedom’, in 1963.
Land was awarded the ‘IRI Medal’ for outstanding technological innovation in 1965, as well as over a dozen other major scientific and technological awards, in addition to being accepted as a ‘Fellow of the Royal Society’.
Personal Life & Legacy
Edwin was married Helen Terre Maislen in 1929. Together, they had two children.
He passed away in Cambridge, Massachusetts of natural causes on March 1, 1991 at the age of 81.
Herbert was the epitome of the "absent-minded professor", who would sometimes get so caught up with his work that he'd forget to eat for hours. He once wore the same clothes for 18 days in a row while working on one particularly thorny problem.
Land was an accomplished scientist despite the fact that he had no official formal degrees. Everyone referred to him as Dr. Land out of respect for his achievements, except the Wall Street Journal, which refused to do so. By the time of his death, Land held 535 patents in his name.
You May Like

See the events in life of Edwin H. Land in Chronological Order