Advanced Search
Philo Taylor Farnsworth was an American inventor who invented the first ever fully functional all-electronic picture pickup device (or video camera tube) and the first ever fully functional and complete all-electronic TV system. He was also the first man to show the system to the general public. Farnsworth, who developed a television system with camera and receiver, later produced the system commercially under the Farnsworth Television and Radio Corporation in Fort Wayne, Indiana. The great American inventor also invented the Farnsworth–Hirsch fusor, a small nuclear fusion device. Although this device isn’t practical enough to generate nuclear energy, it manages to serve as a feasible source of neutrons. Farnsworth’s inventions also contributed to the creation of the electron microscope, gastroscope, baby incubator, and astronomical telescope. All these contributions earned him numerous awards and honours. Various memorials were built in his name and a few streets/awards were named after him; for instance, The Philo Awards (annual public-access television cable competition) and the ‘The Genius of Green Street’ are named after Farnsworth. The Letterman Digital Arts Center, located in San Francisco, built a statue of him in order to honor the great inventor.

John Browning
DID WE MISS SOMEONE?
CLICK HERE AND TELL US
WE'LL MAKE SURE
THEY'RE HERE A.S.A.P
Quick Facts

American Celebrities
Brigham Young University
United States Naval Academy
American Inventors & Discoverers
Leo Men
Childhood & Early Life
Philo T. Farnsworth was born on August 19, 1906 to parents Serena Amanda Bastian and Lewis Edwin Farnsworth as one of their five children in Utah, the US. He had two brothers and two sisters, including a sister named Agnes.
He developed an interest in electronics after his first telephonic conversation with an out-of-state family member. He won the first prize of $25 in a pulp-magazine contest by inventing a magnetized car lock.
He excelled in physics and chemistry at the Rigby High School. While studying there, he once provided his teacher with diagrams and sketches covering many blackboards to show how the electronic television system could be accomplished practically.
Farnsworth then attended the Brigham Young High School and graduated from there in 1924. His father died while he was still in high school and young Philo assumed the responsibility of sustaining his family.
Later on, he studied at the Brigham Young University and earned the Junior Radio-Trician certification from the National Radio Institute.
After this, Farnsworth was recruited at the United States Naval Academy in Annapolis after he earned the country’s second highest score in academy tests. However, he left the academy to take advanced science classes at Brigham Young University.
Through his enrolment in the University of Utah job-placement service, Farnsworth became familiar with philanthropists George Everson and Leslie Gorrell. The duo later on funded Farnsworth's early television research so that he could set up a laboratory to carry out his experiments.
Continue Reading Below
Career
In September 1927, Philo Farnsworth's camera tube transmitted its first picture to a receiver kept in another room of the laboratory. Over the next two years, he worked on improving his techniques and transmitted the first ever live human images via his television system.
In 1931, David Sarnoff of Radio Corporation of America (RCA) offered Farnsworth US$100,000 for his patents but the latter declined. In the month of June that year, he, along with his family, moved to Philadelphia where he joined the Philco Company.
In 1932, Philo Farnsworth met John Logie Baird, an inventor who had given the first ever public demonstration of a working TV system using an electro-mechanical imaging system. Baird, who was seeking to create the electronic television receivers, demonstrated his mechanical system to Farnsworth.
In 1934, the American inventor sailed to Europe and secured an agreement with the Goerz-Bosch-Fernseh in Germany.
He then returned to his laboratory to continue his research. By the year 1936, his company was regularly transmitting entertainment programs on an experimental basis. The same year, Farnsworth, while working with the biologists at University of Pennsylvania, developed a method of sterilizing milk using radio waves. He also invented a fog-penetrating beam for airplanes and ships.
In 1938, he established his own agency named Farnsworth Television and Radio Corporation in Indiana and became its director of research. A year later, RCA approved the multi-year licensing agreement concerning the inventor’s 1927 patent for TV, totalling $1 million.
In 1951, the Farnsworth Television and Radio Corporation was acquired by International Telephone and Telegraph (ITT). At ITT, Farnsworth made his most significant contribution by developing the PPI Projector that went on to become the forerunner of the present day’s air traffic control system.
Farnsworth, along with his family, moved to Utah in the year 1967 so that he could continue his fusion research at the Brigham Young University. He then invited his staff members to accompany him to the Salt Lake City as the team members in the Philo T. Farnsworth Associates (PTFA). By 1970, PTFA had failed to secure the required financing and it got disbanded a year later.
Major Works
During his time at the International Telephone and Telegraph (ITT), Philo Farnsworth served in the basement laboratory—“the cave"—located on the Pontiac Street in Fort Wayne. There he introduced several breakthrough concepts such as a defense early warning signal, radar calibration equipment, submarine detection devices, and an infrared telescope.
Continue Reading Below
Awards & Achievements
Philo Farnsworth was honored with a plaque in Walt Disney World's "Inventor's Circle" in Epcot.
In 1999, Time magazine included him in their list of ‘The Most Important People of the Century’.
In 2006, he was posthumously awarded with the Eagle Scout award. This award was received by his wife, Pem. The same year, he was induced in the Hall of Fame by Broadcast Pioneers of Philadelphia.
A bronze statue of the American inventor was built in the National Statuary Hall Collection in the U.S. Capitol building.
The Farnsworth Peak situated at the northern end of Oquirrh Mountains is named after Philo Farnsworth.
On January 10, 2011, Farnsworth became an inductee of the San Francisco Hall of Fame. Two years later, he was induced into Television Academy Hall of Fame.
Farnsworth was also induced into the Indiana Broadcast Pioneer s of Philadelphia Hall of Fame.
Personal Life & Legacy
While attending college, Philo Farnsworth met Elma “Pem” Gardner whom he married on May 27, 1926. The couple had four sons: Russell, Kent, Philo, and Kenneth.
The inventor’s final years were difficult. He battled depression for years and eventually became addicted to alcohol. He died on March 11, 1971, in Salt Lake City, Utah, after suffering from pneumonia.
Trivia
He was featured on one of the US commemorative postage stamps.
In July 3, 1957, Farnsworth became a mystery guest on the CBS’s quiz show titled ‘I've Got a Secret’.

See the events in life of Philo Farnsworth in Chronological Order 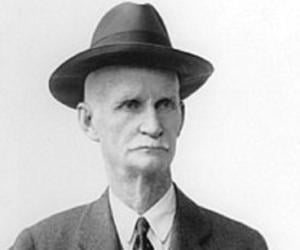