Edward Regan ‘Eddie’ Murphy is an American comedian and actor, known for his witty sense of humor and his portrayal of funny characters. With a penchant for comedy right from his childhood, Eddie started off by performing stand-up acts in front of his friends. He was creative and an ambitious child with an amusing personality. His dream was to become a comedian and entertain the world with his clever and smart sense of humor. He received his big breakthrough when he landed the role of a comedian in a television show. He has earned various awards and accolades for his phenomenal performances both in films and on television, including 'Primetime Emmy Award,' and 'Mark Twain Prize for American Humor.' He bagged in an 'Academy Award' nomination for his performance in 'Dreamgirls.' Like his professional life, Eddie’s personal life too has been much talked about because of his multiple relationships with women. However, Eddie has won many hearts through his award-winning roles and inspiring portrayal of characters in movies. He has been accepted and appreciated throughout the world for his delightful performances. Dwayne Johnson
3rd April In History
DID WE MISS SOMEONE?
CLICK HERE AND TELL US
WE'LL MAKE SURE
THEY'RE HERE A.S.A.P
Quick Facts

American People
Stand-up Comedians
American Men
New Yorkers Actors
Aries Actors
Childhood & Early Life
Eddie Murphy was born on April 3, 1961, in Brooklyn, New York, USA, to Lillian, a telephone operator, and Charles Edward Murphy, a police officer and an amateur comedian.
His parents got divorced when he was three years old. When he was eight, his father died and his mother became very ill. As a result, he and his elder brother, Charlie, lived in foster care for a year.
When he was nine, his mother married Vernon Lynch, a foreman at an ice cream plant, and the family moved to the Roosevelt suburb which primarily housed African-Americans.

As a kid, he used to watch television often, and impersonated characters, such as ‘Bugs Bunny’ and ‘Bullwinkle.’

He got enrolled at ‘Nassau Community College’ and worked part time as a shoe store clerk. He also performed at local clubs and bars. 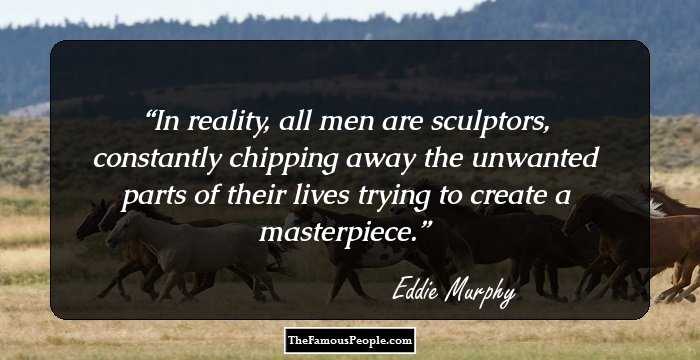 Quotes: Trying
Continue Reading Below
Career
In 1980, he auditioned for a role for ‘NBC’ network’s popular late night comedy show ‘Saturday Night Live!’ and got selected. He performed in the show periodically until one night when he was asked to perform stand-up comedy for a few minutes as the channel was left without any content for a brief period.
His performance was delightful and he became one of the main comedians of the show thereafter. He created memorable characters, such as ‘Mister Robinson,’ an urban version of ‘Mister Rogers,’ and an illiterate convict and poet named ‘Tyrone Green.’
In 1982, he landed his first major movie role in ‘48 Hours,’ which also starred Nick Nolte. The film was a commercial success, and Murphy was highly appreciated for his charming performance. He followed it up with his next delightful performance in the movie ‘Trading Places’ in 1983.

In 1984, Eddie Murphy's performance in the movie ‘Beverly Hills Cop’ made him a superstar, and he was nominated for a ‘Golden Globe Award.’ He also appeared in its 1987 sequel, ‘Beverly Hills Cop II,’ which too was a commercial success.

His next successful movie was a romantic comedy titled ‘Coming to America,’ which released in 1988. In 1990, he took a break from movies following the failure of ‘Another 48 Hours,’ a sequel to his 1982 flick ‘48 Hours.’
Upon his return, he did several movies which were also commercially unsuccessful. In 1996, he appeared in the comedy ‘The Nutty Professor’ which was a success at the box-office. He also voiced the role of ‘Donkey’ in the animated ‘Shrek’ movie franchise which became popular with the audience.
His next critically acclaimed performance came in the movie ‘Dreamgirls’ in 2006. After that, he appeared in movies, such as ‘Meet Dave’ (2008), ‘Imagine That’ (2009), ‘Tower Heist’ (2011), and ‘A Thousand Words’ (2012).
Eddie returned to ‘Saturday Night Live’ on the occasion of its ‘40th Anniversary Special’ in 2015. In 2016, he played the titular role opposite Britt Robertson in the drama film ‘Mr. Church.’

In 2019, he portrayed the character of American comedian Rudy Ray Moore in the biopic film ‘Dolemite Is My Name’. Eddie Murphy was also the producer of the film and received a Golden Globe Award nomination for the film.

In 2021, Eddie Murphy starred in the film ‘Coming 2 America’. The film is a sequel to 1988 movie ‘Coming to America’ and Eddie Murphy reprised his role of Prince Akeem Joffer.

Major Works
He came up with one of the finest works of his career in the 1996 comedy film ‘The Nutty Professor.’ His performance in the film earned him worldwide popularity and appreciation.
His endearing performance as the soul singer in the 2006 movie adaptation of the musical ‘Dreamgirls’ was highly praised and admired by everyone. It also won him several awards and nominations.
Awards & Achievements
For his performance in the 1996 movie ‘The Nutty Professor,’ he won the ‘Best Actor’ award at the ‘National Society of Film Critics Awards.’ He also won the ‘Saturn Award’ under the ‘Best Actor’ category.
In 2007, he was nominated for the ‘Best Supporting Actor’ award at the ‘Academy Awards’ for his performance in the movie ‘Dreamgirls.’ For the same movie, he went on to win the ‘Golden Globe Award’ and the ‘Screen Actors Guild Award’ under the ‘Best Supporting Actor’ category.
He also received ‘Kids’ Choice Award’ for ‘The Best Voice from an Animated Film’ for his role in the movies ‘Shrek the Third’ and ‘Shrek Forever After’ in the year 2008 and 2011 respectively.
Personal Life & Legacy

Murphy began a relationship with former model and actress Nicole Mitchell in 1988, and got married to her on March 18, 1993, after two years of cohabitation. They were blessed with five children. On April 17, 2006, they got divorced after 13 years of marriage.

After his divorce, he began dating Melanie Brown of ‘Spice Girls’ fame. On April 3, 2007, Brown gave birth to a baby girl, who was later confirmed to be Murphy’s daughter. Subsequently, she was named Angel Iris Murphy Brown.

In January 2008, he exchanged marriage vows with a film producer named Tracey Edmonds in a private ceremony on an island. They planned on having a legal ceremony upon their return to the U.S. but it never happened as they broke up after sometime when he started dating Paige Butcher.

On 3 May 2016, Paige and Murphy welcomed their first daughter Izzy Oona Murphy, and got engaged on September 2018. They welcomed their second child, a son named Max Charles Murphy, on November 30, 2018. Eddie Murphy has ten children in total.

See the events in life of Eddie Murphy in Chronological Order