If you never change your mind, why have one? said the father of lateral thinking; Edward de Bono. He was the world’s foremost expert on lateral thinking, tactical leadership, creativity and problem solving. His limited tools and methods brought bewildering outcomes to firms all over the world and to people from a wide range of mixed cultures, didactic backgrounds, professions and other miscellaneous groups. Dr. de Bono explained that progressive training keys are vital for success in the challenging times of the modern world. He is accredited for techniques of thinking that are unpretentious, concrete and powerful. His ideas are employed across numerous institutions and organizations around the world. In his long and successful career, he wrote over 75 interesting books, which were translated to nearly 38 languages. He was also a consultant and inventor and held many offices and appointments at universities like Oxford and Cambridge. He also made two television series: De Bono’s Thinking Course and The Greatest Thinkers. Judith Wright
Writers #1946
Intellectuals & Academics #592
DID WE MISS SOMEONE?
CLICK HERE AND TELL US
WE'LL MAKE SURE
THEY'RE HERE A.S.A.P
Quick Facts

British Celebrities
Maltese
British,Maltese Celebrities
British Men
Male Writers
Taurus Writers
British Writers
Childhood & Early Life
Edward Charles Francis Publius de Bono was born in Malta on 19 May 1933.
He studied at the University of Malta, where he obtained his medical degree. He then studied at St. Edward’s College during World War II.
He also studied at Christ Church, Oxford, where he majored in psychology and physiology.
During his college years, he achieved two canoeing records and represented Oxford University in polo matches.
He earned a Ph.D. degree and a DPhil from Trinity College, Cambridge and went on to earn a DDes and an LLD from the Royal Melbourne Institute and the University of Dundee, respectively. 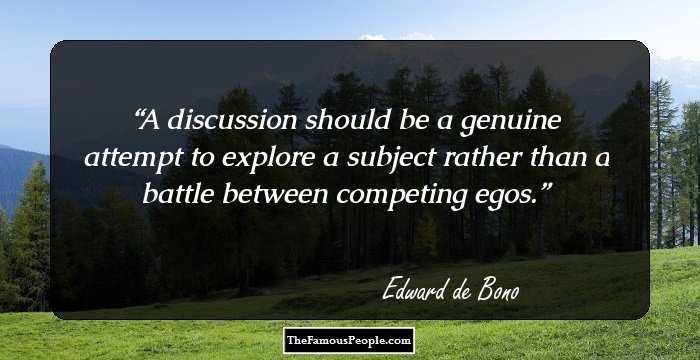 Famous Beautiful Women With Green Eyes
Career
He worked for a brief period of time as a research subordinate at Oxford University. He then accepted a position as a lecturer there. In 1961 however, he moved from there and began teaching at the University of London. Two years later, he accepted the position of assistant director of research at Cambridge University.

In 1967, he published his first book, The Use of Lateral Thinking, which is considered to be one of his best-works. He introduced the concept of lateral thinking through it.

He then started working on his next book, New Think, which was released in 1968 along with another publication titled, The Five-Day Course in Thinking.

In 1969, The Mechanism of Mind was published which talks about the sustaining prototype of the mind. He then authored a more detailed book titled, Lateral Thinking: Creativity Step by Step, the next year.

1971 was an extremely productive year for the writer. After building a strong foundation with his ideologies, he authored Technology Today, Practical Thinking and Lateral Thinking for Management.

From 1972 to 1976, he authored a number of other books including Children Solve Problems, Po: A Device for Successful Thinking, Teaching Thinking and The Greatest Thinkers: The Thirty Minds That Shaped Out Civilization. Around this time, he also established the Cognitive Research Trust.

In the 1980s, he published the following books; Atlas of Management Thinking, De Bono’s Course in Thinking, Tactics: The Art and Science of Success and the famous, Six Thinking Hats.

One of his works published in 1982, titled De Bono’s Course in Thinking was also made into a television show that was aired on BBC.

In 1990, he was called to head a meeting with Nobel laureates from around the world in Korea.
Continue Reading Below

In 1995, he created a documentary based on the future titled, 2040: Possibilities by Edward de Bono. This documentary served as a discourse which was intended to prepare the audience with the process of being released from cryogenic freeze cells in the future.

In 1996, a de Bono Institute was established as a center for new thinking. The same year, he authored the book, Textbook of Wisdom.

In 1997, he was invited to be a speaker at the leading ecology conference, which was held in Beijing. The subsequent year, he authored, How to Be More Interesting.

He was convinced that the betterment of humanity would eventually be through better language. Thus, he published the book, The Edward de Bono Code Book.

From 2004 to 2009, he then went on to publish a wide array of his works, including How to Have A Beautiful Mind, Six Value Medals, How to Have Creative Ideas, Six Frames For Thinking About Information and Think! Before It’s Too Late. 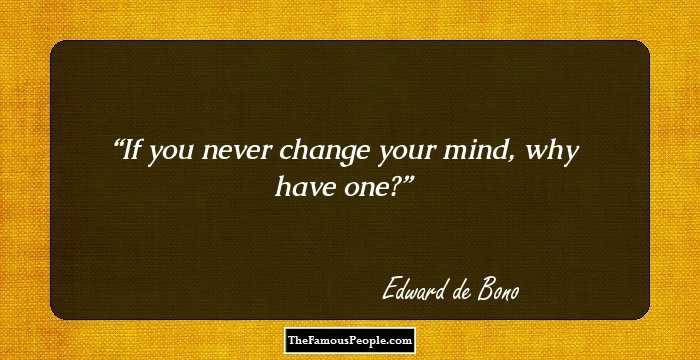 He coined and introduced the concept of ‘lateral thinking’, in 1967. This approach helps people solve problems through a imaginative yet incidental approach. This methodology is now used in a number of corporate offices around the world and has proven to be extremely useful in terms of problem identification, problem solving and inducing motivation. Thus, he is known as the father of ‘lateral thinking’.

In 1985, he authored Six Thinking Hats. This book is considered to be one of his greatest literary works and provides the readers with effective tools for group discussion and individual thinking. It also provides a more detailed insight into the concept of ‘parallel thinking’ and ‘critical thinking’.

In 1992, he became the first recipient of the Capire Prize in Europe, for outstanding achievement.

In 1994, he was presented the Pioneer Prize in the field of Thinking, at the International Conference on Thinking at MIT, Boston.

In 1995, he was honored with the National Order of Merit by the President of Malta.
In 2005, he was nominated for the Nobel Prize in Economics. 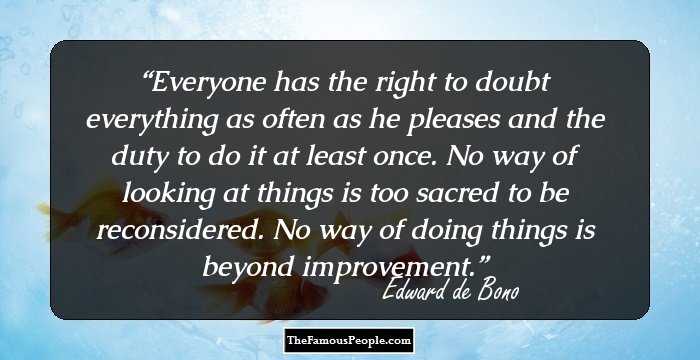 The European Creativity Association conducted a survey and through the survey it was found that 40% of the people deliberated Dr. de Bono as the utmost influence in the field of imagination more than any other nominee.
The International Astronomical Union named a planet after this author, consultant and inventor in recognition of his contributions to humanity.