Robert Stone was a prolific novelist who authored several novels and short stories. He was known for his powerful depiction of the despair and dark side of his characters who battle the challenges like forces of nature, politics and their own failings. For someone who had a hard childhood and grew up in a broken home, writing about the challenges of life seemed like a natural path to tread. His father abandoned the family when he was small and he was sent to an orphanage after his schizophrenic mother was institutionalized. As a young adult, he tried to seek refuge by drowning himself in alcohol and drugs, but that did not ease his troubled mind. He served for four years with the Navy and traveled to various remote places during his service. During his navy stint, he witnessed war related violence in several areas and became preoccupied with the concept of politics. Inspired to write partly by his own difficult experiences, and partly by what he had witnessed as a navy man, he published his first novel A Hall of Mirrors which portrayed ring-wing racism. His novel received critical acclaim and thus began his career as a writer. He went on to produce several other novels, short story collections, and memoirs. American Celebrities
American Men
Stanford University
New York University
Leo Writers
Childhood & Early Life
Robert Stone was born to C. Homer and Gladys Catherine Stone in New York City. His father abandoned the family soon after Robert was born. His mother, who once worked as an elementary school teacher, suffered from schizophrenia and was fired from her job. She raised her son by working as a hotel maid.
His mother was institutionalized when he was around five or six years old and the young boy was sent to live in a Catholic orphanage.
He attended Catholic schools where he developed a love for language and reading. He dropped out of high school in 1954. 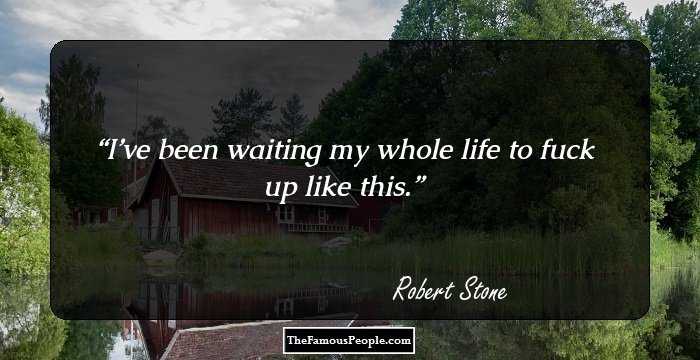 Quotes: Life, Like
Continue Reading Below
Career
He enlisted in the U.S. Navy in 1955 where he first served as a radioman and then as a journalist. He was in the navy till 1958 and traveled to many remote places like Antarctica and Egypt during this period; he also witnessed the bombing of the Port Said by the French Army.
In 1958, he found employment as an editorial assistant for the ‘New York Daily News’. He worked there for a couple of years before shifting to New Orleans.
He returned to New York in 1962 and earned a Stegner fellowship in the creative writing program at Stanford.
During the early 1960s he became involved with the beatnik subculture and met the Beat Generation writer Ken Kesey. He began experimenting with drugs and started viewing everything as a mystical experience.

His first novel A Hall of Mirrors was published in 1967. The story focused around a formerly brilliant musician who turns into an alcoholic and gets involved in political problems. His debut novel was critically acclaimed and he was motivated to write more.

In 1971, while working with a British Journal called ‘Ink’ he went to Vietnam as a correspondent. Whatever he witnessed there was truly shocking—the drug trade in Saigon was as disturbing as the war scenes he had seen while in the navy.
Starting from 1972 he embarked on a teaching career as a University Professor and taught in various prestigious institutions such as Harvard University, Stanford, Princeton, etc.

He wrote his second novel Dog Soldiers in 1974 based on his experiences in Vietnam. The story features a journalist and a sailor who get involved in a drug deal that goes wrong. The novel was highly praised and made into a film Who’ll Stop the Rain in 1978.

His novel A Flag for Sunrise which was published in 1982 was based upon his visits to Nicaragua. He had seen pervasive and meaningless use of violence there which was reflected in graphic detail in the novel.

In 1986, his novel Children of Light was released. The story focused on the lives of a failed playwright and his old flame, a successful actress, and their relationship with a drug addict.

During the 1990s he brought out three pieces of literary works: two novels Outerbridge Reach (1992) and Damascus Gate (1998) and a collection of short stories Bear and His Daughter (1997).

His 2003 novel Bay of Souls was a thriller which was about a married professor who gets entangled in an extramarital affair with a mysterious woman.

He published a memoir in 2007 which was titled Prime Green: Remembering the Sixties in which he discussed his experiences in the American counterculture of the 1960s.

In 2010, he brought out a collection of short stories titled Fun with Problems. 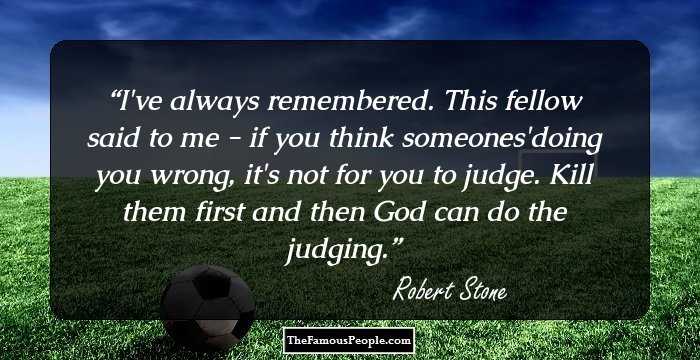 His best known work is Dog Soldiers, a novel about a journalist and a Merchant Marine sailor who get involved in a heroin deal. The novel was later adapted into a film and named by TIME magazine as one of the 100 best English-language novels, 1923 to 2005.

He won the William Faulkner Foundation Award for notable first novel in 1969, for A Hall of Mirrors. He had been a finalist for the Pulitzer Prize twice.

The National Book Award for Fiction was presented to him in 1975 for his novel Dog Soldiers. 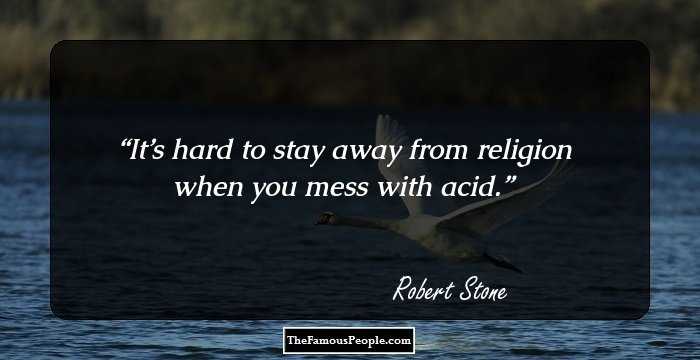 He married Janice Burr, a social worker, in 1959. The couple had two children.

He was a chain smoker and suffered from severe emphysema.

Robert Stone died on January 10, 2015, from chronic obstructive pulmonary disease. He was 77.

Quotes By Robert Stone | Quote Of The Day | Top 100 Quotes

See the events in life of Robert Stone in Chronological Order