Dustin Lee Hoffman is an American actor. He has worked in a variety of projects in theatre, films, and television. Hoffman struggled for a good part of his life by working in low budget Off-Broadways in New York; he once confessed that he lived under American poverty line until he was 31 years old. His fortunes changed when he was cast to play the role of a naïve and confused young man in the movie ‘The Graduate.’ The movie established Hoffman in the American film industry; before ‘The Graduate’ happened, he had a hard time landing major roles. After the release of the film, he was praised for his acting skills. He became the talk of the town and was subsequently starred alongside well-established actors like Robert De Niro, Meryl Streep, Gene Hackman, etc. Some of the other famous movies from Hoffman’s career are ‘Kramer vs. Kramer’ and ‘Rain Man’; he won ‘Academy Awards’ for both the movies. Apart from appearing on the silver screen, he has also given many theatrical performances. He has also worked in television movies and even won accolades for his voice acting skills in ‘Kung Fu Panda.’ Dustin Hoffman was born on 8 August 1937, in Los Angeles, California, USA, to Lillian and Harry Hoffman. His father was a prop supervisor at ‘Columbia Pictures’ and furniture salesman. He was brought up in a humble Jewish family that was neither religious nor observant.

Hoffman went to ‘Los Angeles High School’ and later attended ‘Santa Monica College’ to pursue medicine. However, he quickly changed his mind and enrolled at the ‘Pasadena Playhouse’ to pursue a career in acting. 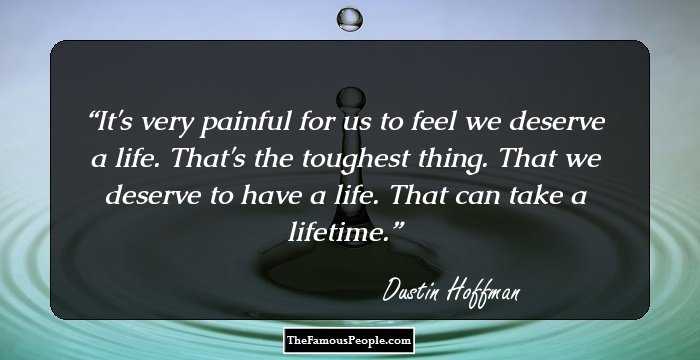 At ‘Pasadena Playhouse,’ Hoffman got acquainted with Gene Hackman, who was struggling to land decent roles at that time. They both moved to New York, but Hoffman did not get many opportunities because of his supposedly unconventional looks.

During the ‘60s, Hoffman received opportunities to act in Off-Broadway productions. Side by side, he also studied method acting at ‘Actors Studio.’ Finally in 1966, he performed in a big production, ‘Eh?’ by Henry Livings.

In 1967, he acted in his first theatrical film ‘The Tiger Makes Out.’ He then directed the productions of ‘Two for the Seesaw’ and ‘The Time of Your Life’ for the ‘Fargo-Moorhead Community Theatre,’ for which he received $1000.

Mike Nichols cast him to play the lead role in ‘The Graduate’ (1967). The movie became a huge box office hit, collecting more than $100 million against a budget of just $3 million. His unconventional looks and brilliant acting skills established him as a star. He also received an ‘Academy Award’ nomination for his performance.

Although Hoffman started receiving offers in Hollywood, he returned to the Broadway in 1968 to act in ‘Jimmy Shine.’ His acting was thoroughly appreciated and he received a ‘Drama Desk Award.’

In 1969, ‘Midnight Cowboy,’ an American drama starring Hoffman and Jon Voight, was released. Hoffman was once again nominated for an ‘Academy Award’ and the movie won three ‘Academy Awards.’

His next big film ‘Little Big Man’ released in 1970. It was considered to be an unconventional movie at that time, more like an anti-establishment film. The movie was well-received by the critics.

The year 1979 elevated Hoffman’s position in the American film industry when ‘Kramer vs. Kramer’ released. His portrayal of a workaholic father earned him accolades, including his first ‘Academy Award.’

A television movie titled ‘Death of a Salesman’ released in 1985. It turned out to be another stepping stone in Hoffman’s career. His acting in the movie was critically acclaimed and he won an ‘Emmy’ and ‘Golden Globe’ for his role.

He then appeared in the 1987 comedy movie ‘Ishtar,’ which was a serious failure in Hoffman’s otherwise shinning film career. He starred in the movie with Warren Beatty. Although it was a flop, ‘Ishtar’ became a cult film.

Hoffman was appreciated for his portrayal of an autistic savant in the film ‘Rain Man’ in 1988. He prepared for the role for around two years and received his second ‘Oscar’ for his performance.

In the following year, ‘Family Business’ was released in which Hoffman starred alongside actors like Sean Connery and Matthew Broderick. The movie was critically panned, but found commercial success on video rentals.

1997 proved to be a successful year for Hoffman as he appeared in ‘Mad City’ with John Travolta and ‘Wag the Dog,’ a black comedy, with Robert De Niro. For ‘Wag the Dog,’ he received his seventh ‘Academy Award’ nomination.

In 2004, Hoffman and Robert De Niro worked together again in ‘Meet the Fockers,’ a sequel to the movie ‘Meet the Parents.’ He won the ‘MTV Movie Award’ for ‘Best Comedic Performance’ for the movie.

In 2006, he starred alongside actors like Will Ferrell and Maggie Gyllenhaal in ‘Stranger Than Fiction,’ a comedy-drama fantasy film. In the same year, he also played ‘Giuseppe Baldini’ in ‘Perfume: The Story of a Murderer.’

In 2007, he did an advertising campaign for the Australian telecommunications company Telstra's ‘Next G’ network and then appeared in 50 Cent’s music video ‘Follow My Lead’ as a psychiatrist. He also starred in ‘Mr. Magorium's Wonder Emporium.’

He voiced ‘Master Shifu’ in the animation film ‘Kung Fu Panda’ in 2008. It is said that he was initially reluctant to play the voice role. To his surprise, his voice acting won him the ‘Annie Award’ for ‘Voice Acting in an Animated Feature.’

In 2011, he reprised his role as ‘Shifu’ in the commercially successful film ‘Kung Fu Panda 2.’ Around the same time, he directed ‘Quartet,’ a BBC Films comedy, starring Maggie Smith. The following year, he recorded ‘Being There’ for ‘Audible.com.’

In 2014, he was part of the classic hit ‘Chef’ alongside Jon Favreau. He then starred in movies like ‘Boychoir’ and ‘The Cobbler.’ The following year, he co-starred alongside Judi Dench in the TV movie ‘Roald Dahl's Esio Trot,’ which earned him an ‘International Emmy Award’ for ‘Best Actor.’

In 2016, he reprised his role as ‘Master Shifu’ in ‘Kung Fu Panda 3’ and in the short film ‘Kung Fu Panda: Secrets of the Scroll.’

His 2017 movie ‘The Meyerowitz Stories’ premiered at the ‘Cannes Film Festival’ and received widespread critical acclaim. In the film, he starred alongside Adam Sandler, Ben Stiller, and Emma Thompson.

In 2019, he appeared in the Italian thriller ‘L'uomo del labirinto’ (Into the Labyrinth). He was then cast to play ‘Eugene’ in Mayim Bialik’s drama movie ‘As Sick as They Made Us.’ 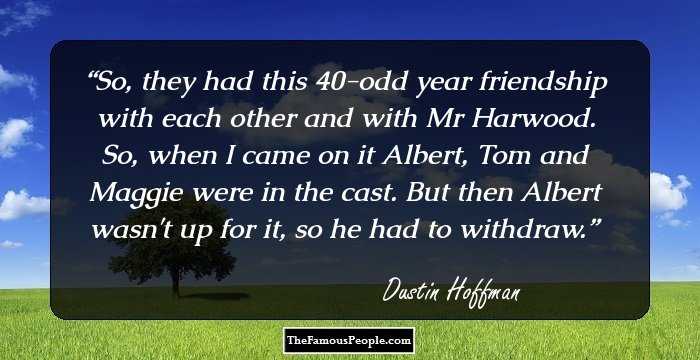 ‘The Graduate’ (1967) is still considered to be Hoffman’s major work as it changed his fortunes for good. His portrayal of ‘Benjamin Braddock’ turned out to be a breath of fresh air in the American film industry of the ‘60s.

‘Kramer vs. Kramer’ (1979) was another milestone in his career in Hollywood. He appeared opposite Meryl Streep in the movie, which earned him his first ‘Academy Award.’ The movie was a huge hit and received five ‘Oscars’ in total. 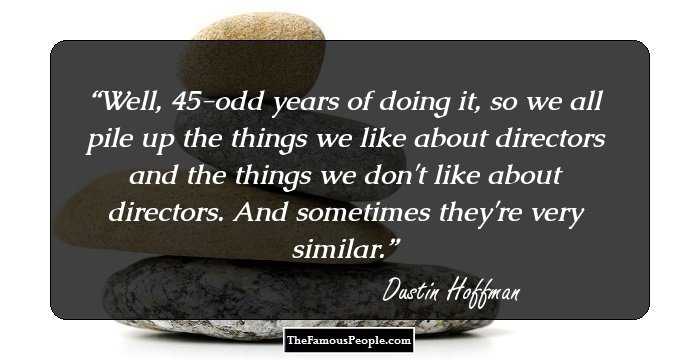 In 1969, Hoffman married Anne Byrne. With Byrne, he had a daughter, Jenna. Byrne already had a daughter named Karina from her previous marriage; Hoffman adopted Karina. They lived together in Greenwich Village but got divorced after staying together for 11 years.

He then married a businesswoman named Lisa Gottsegen in 1980. They have four children together: Jacob Edward, Rebecca Lillian, Maxwell Geoffrey, and Alexandra Lydia.

Trivia
Hoffman was treated for cancer in 2013.

In 2017, he was accused by seven women for sexual misconduct, including a then-17-year-old girl. He apologized to the girl but refused to respond to the allegations of other six women.

Quotes By Dustin Hoffman | Quote Of The Day | Top 100 Quotes

See the events in life of Dustin Hoffman in Chronological Order