Donald Edmond Wahlberg Jr. is an American singer, actor, and producer. He is well-known by his nickname ‘Donnie.’ In spite of coming from an ordinary background, he has carved a niche for himself in the field of entertainment. He is a founding member of the band ‘New Kids on the Block.’ This band spawned many hit singles like ‘Please Don’t Go Girl’ and ‘The Right Stuff.’ This was the hottest singing / dancing group in the late-80s and early-90s. They sold more than 80 million albums worldwide. Apart from music, he has given memorable performances in movies like ‘The Sixth Sense.’ He has also starred in many TV series which have been well-received by the viewers. He has also produced several reality television shows. Though his brother Mark is a bigger film star, Donnie has managed to step out of his shadow and stamp his authority in the music and film industry. American People
Pop Singers
Hip Hop Singers
Lyricists & Songwriters
Film & Theater Personalities
Childhood & Early Life
Donnie was born on 17 August 1969, in Dorchester, Massachusetts, USA. Donnie was the eighth of the nine children born to his parents.
His mother Alma Wahlberg was working as a nurse’s assistant at ‘St. Margaret Hospital,’ while his father Donald Wahlberg worked as a truck driver. Donnie was named after his father.
He attended ‘William Monroe Trotter School’ in Roxbury. He had to travel for more than half an hour to reach his school. On these long drives to school, he developed an interest in rap music. He became friends with Danny Wood during his schooling at Roxbury. Along with Danny, he started composing rap lyrics.
After his parents’ divorce, he and his younger brother Mark started living with their mother. He joined ‘Copley High School.’ Danny also joined this school. This is where they formed their first rap group named ‘Kool Aid Bunch.’
At ‘Copley High School,’ he started performing in school plays and got involved in various aspects of theater, such as acting, singing, writing, and directing.
At the age of 15, he became a member of a teen vocal group called ‘NYNUK.’ 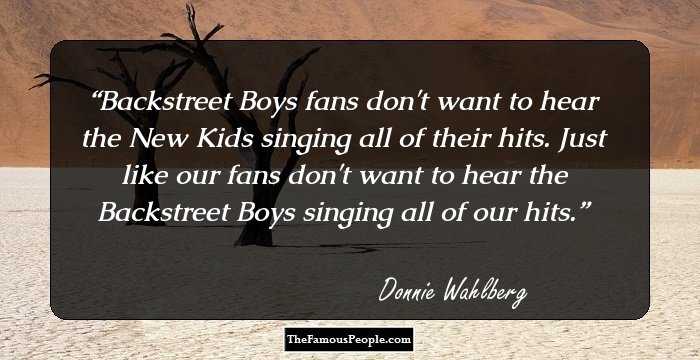 The Best Black Actresses Of All Time
Career
In 1984, at the age of 15, Donnie was auditioned by music producer Maurice Starr. Maurice was amazed by his singing, dancing, and rapping skills. Subsequently, he entrusted on him the responsibility of forming ‘New Kids on the Block.’ Donnie recruited Mark, Danny Wood, Jordan Knight, and Knight’s older brother Jonathan.
The group’s first album, which was a self-titled album, was a failure. Two years later, they released another album titled ‘Hangin’ Tough’ which became a huge hit.
In 1993, the group parted ways with Maurice Starr. They independently released an album titled ‘Face the Music’ in 1994. This album was well-received by the critics. However, it did not do well commercially. ‘New Kids on the Block’ disbanded later that year.
After the group’s disbandment, Donnie decided to try his hand at acting like his younger brother Mark. In 1996-97, he landed small roles in films like ‘Bullet,’ ‘Ransom,’ and ‘Black Circle Boys.’
In 1998, he landed a starring role in the film ‘Southie’ along with his brother Robert.
Donnie received his first major break in 1999 when he appeared in the film ‘Sixth Sense.’ This film was a huge hit, and his acting was praised by the critics.
In 2001, he delivered an amazing performance as a ‘World War II’ paratrooper in the critically acclaimed ten-part series ‘Band of Brothers.’ Later, he also acted in the drama series ‘Boom Town’ (2002-2003) and appeared in the movie ‘Dream Catcher’ (2003).
In 2005, he appeared in commercially hit films like the ‘Saw’ series. In 2006, he acted in the boxing drama film ‘Annapolis’ and appeared in the drama series ‘Runaway.’
In 2008, ‘New Kid on the Block’ reunited and released the album ‘The Block.’ This album peaked at number one on ‘US Billboard Top Internet Albums.’ Subsequently, the band went on a world tour to promote the album. This tour helped them to reconnect with their fans.
Continue Reading Below
In 2010, he became part of the ‘CBS’ police drama ‘Blue Bloods.’
In 2013, ‘New Kid on the Block’ went on a tour to support their new album ‘10.’ This tour also featured fellow boy bands, ‘98 Degrees’ and ‘Boyz II Men.’
In 2014, along with his youngest brother Mark and eldest brother Paul, he launched a reality show titled ‘Wahlburgers’ which focused on the relationship between siblings. This show received great response from fans as well as from critics.
In 2017, the band released their first EP ‘Thankful’ which received positive reviews. On October 2018, they announced their ‘MixTape Tour’ and collaborated with stars like ‘Salt-N-Pepa,’ Debbie Gibson, Tiffany, ‘Naughty By Nature.’ The tour commenced on May 2019. 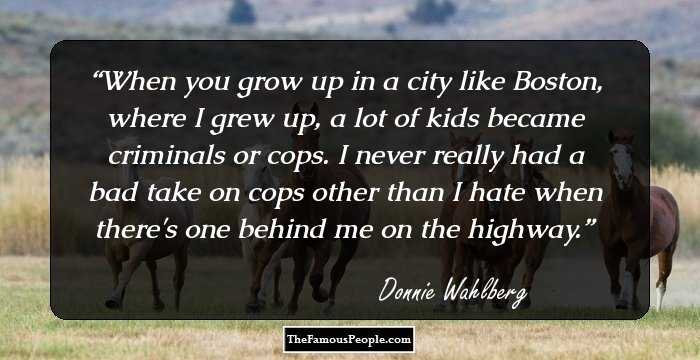 Quotes: You, Me
Major Works
In 1988, ‘New Kid on the Block’ released their second album. This album’s lead single ‘Please Don’t Go Girl’ created hysteria among fans. By late 1989, this album was rated number one in the U.S.
In 1990, this group released the album ‘Step by Step’ which had singles like ‘Tonight.’ This album was also a hit. By this time, the group was the most popular music group in America.
Donnie became popular as an actor in 1999 with an astonishing performance as the deranged ex-patient who threatens Bruce Willis’ character in the acclaimed film ‘The Sixth Sense.’ Though his screen time in the movie was comparatively less, his performance impressed many. He lost 43 pounds for the role, and the audience was surprised to discover that the hysterical character seen in the movie was Donnie from ‘New Kids on the Block.’
Awards & Achievements
The 2001-released ‘Band of Brothers’ received six ‘Emmy Awards.’
Continue Reading Below
His reality show ‘Wahlburgers’ was nominated for ‘Outstanding Unstructured Reality Program’ at ‘Primetime Emmy Awards’ in 2014 and 2015. 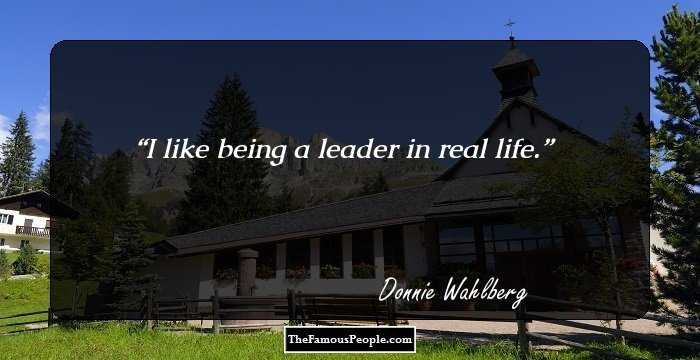 Quotes: Life
Personal Life & Legacy
In 1999, Donnie married Kim Fey and got divorced after nine years in 2008. They have two sons, Xavier and Elijah.
In 2014, he got married to TV personality Jenny McCarthy in Illinois.
His younger brother Mark Wahlberg is a well-known actor, singer, and producer.
His eldest brother Paul is the head chef at a restaurant named ‘Wahlburgers’ in Boston. Paul co-owns the restaurant with Donnie and Mark.
Humanitarian Work
He supports ‘Boys and Girls Club of America’ which works for the disadvantaged youths and children. He also supports ‘Habitat for Humanity,’ an organization which builds homes for homeless people across the world.
He is associated with a non-profit organization called ‘KaBoom’ which is dedicated to creating great play spaces for children.
He is part of ‘Entertainment Industry Foundation’ which works towards raising awareness and funds for causes, such as cancer research, creative arts, education, cardiovascular research, etc.
Trivia
Donnie considers himself extremely lucky not to have turned to the world of drugs and crime as he was a mischievous and defiant kid. He learned his lessons by seeing some of his family members who had chosen the wrong path. He then went on to carve a niche for himself in the field of music and acting.
During his heyday, Donnie carried a ‘bad boy’ image, thanks to several run-ins with the law. He was involved in setting the hallway on fire at a Kentucky hotel. Though these charges were dropped later, it established him as a controversial personality. He also delved into ‘body art,’ with numerous tattoos and piercings.
He takes great interest in basketball. He is a fan of ‘Boston Celtics.’

Quotes By Donnie Wahlberg | Quote Of The Day | Top 100 Quotes

See the events in life of Donnie Wahlberg in Chronological Order