(Best Known for His Role in Films: 'The Departed', 'The Fighter' and 'Italian Job')

Mark Robert Michael Wahlberg is an actor and singer who first entered the world of show business as the lead singer of the band Marky Mark and the Funky Bunch. His band released the song ‘Good Vibrations’ which became a No.1 hit on the Billboard Hot 100. Their debut album ‘Music for the People’ was also a big hit. Growing up as the youngest of nine children in a broken home, he was exposed to drugs and violence from a young age. He was in serious trouble with the law by the time he was 16; he was charged with attempted murder at such a young age and jailed for his involvement in a savage assault. Sensing that he had hit rock bottom he vowed to rise above a life of crime and become a respectable individual. His brother Donnie who had a successful boy band called ‘New Kids on the Block’ introduced him to music. Music literally rescued the young Mark from a life of drugs and violence and gave him a new purpose in life. Motivated by his success as a musician he forayed into acting and made his debut in the 1993 TV movie ‘The Substitute’. He also launched a line of sports nutrition supplements called ‘Marked’ before entering the world of films. Robert Wahlberg
DID WE MISS SOMEONE?
CLICK HERE AND TELL US
WE'LL MAKE SURE
THEY'RE HERE A.S.A.P
Quick Facts

American People
Singers
Business People
T V & Movie Producers
American Men
Childhood & Early Life
He was born as the youngest of nine siblings to Alma Elaine, a bank clerk, and Donald Wahlberg, a delivery driver. His parents divorced when he was 11.
He attended Copley Square High School but dropped out long before graduation. He started doing drugs while he was still very young and became involved in street violence even before he turned 13. His violence increased with time and he brutally attacked a Vietnamese man with a wooden stick when he was 16 and was charged with attempted murder.
He was jailed and as he spent time in state prison at Boston’s Deer Island House of Correction he realized that he was wasting his life. He decided to break free from his criminal past and make a fresh start as a respectable citizen of the society. 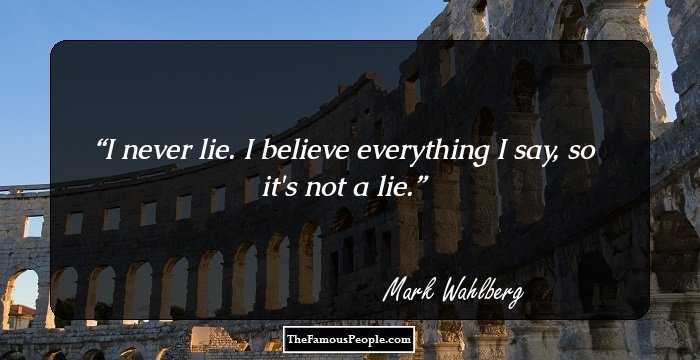 Quotes: Never, Believe, I
Continue Reading Below
Career
His elder brother Donnie had a successful boy band called New Kids on the Block. Mark was one of the original members but he soon quit to form his own band. He formed the hip hop group Marky Mark and the Funky Bunch along with his friends Scott, Hector, Terry and Anthony.
The group released their debut album ‘Music for the People’ in 1991. The album contained the song ‘Good Vibrations’ which peaked at No.1 on the Billboard Hot 100. The album was produced by his brother Donnie.
Boosted by the success of their debut, the band quickly released its next album ‘You Gotta Believe’ in 1992. However, this album was not successful and the band broke up.
He made a transition to acting with the 1993 television movie ‘The Substitute’. In 1994, he appeared as Private Tommy Lee Haywood with Danny DeVito in the comedy film ‘Renaissance Man’. He played a villain David McCall in the thriller ‘Fear’ in 1996.
In the 1997 movie ‘Boogie Nights’, he portrayed Eddie Adams, a popular adult film star who rises to fame during the Golden Age of adult films and then falls from glory later on. The film was a big critical as well as commercial hit.
He starred along with Tim Roth, Helena Bonham Carter, and Estella Warren in the 2001 science fiction ‘Planet of the Apes’ which was based on Pierre Boulle’s novel of the same name.
He played the main character in the sports drama ‘Invincible’ in 2006 which was based on the true story of Vince Papale who once played for the Philadelphia Eagles.
He played the supporting role of Sgt. Sean Dignam in the Leonardo DiCaprio starred ‘The Departed’ in 2006. The crime thriller revolves around the story of a mole who is planted within the Massachusetts State Police. The movie won several Academy Awards.
He portrayed Micky Ward, a professional boxer in the biographical sports drama ‘The Fighter’ in 2010. One of the reasons he was chosen to play the character was his real life friendship with the boxer, and the similarities they actually shared.
Continue Reading Below
He is the co-producer of the HBO period drama series ‘Boardwalk Empire’ which first premiered on September 2010. The award winning show is inspired by the book ‘Boardwalk Empire: The Birth, High Times, and Corruption of Atlantic City’ by Nelson Johnson. 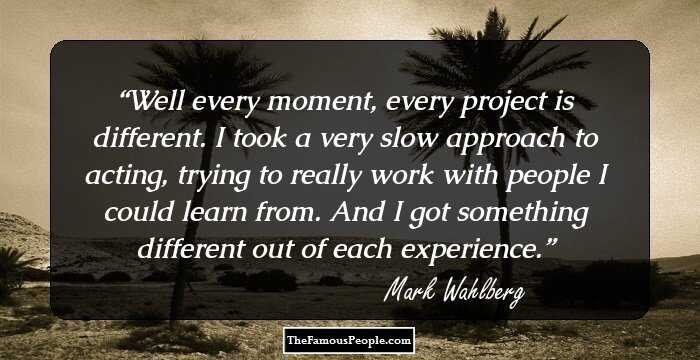 Quotes: Trying
Major Works
He was part of the supporting cast of the highly acclaimed crime thriller ‘The Departed’ in which he played the role of a staff sergeant. He won an Academy award nomination for the Best Supporting Actor for this role.
His portrayal of the welterweight boxer Micky Ward in the biographical sports drama ‘The Fighter’ was critically appreciated. He won several awards and accolades for his convincing depiction of the boxer and for bringing the character alive on screen.
Awards & Achievements
He won several awards for his role of Sgt. Sean Dignam in the thriller ‘Departed’ (2006) including the Boston Society of Film Critics Award for Best Supporting Actor and National Society of Film Critics Award for Best Supporting Actor.
He won the African-American Film Critics Association for Best Actor for his portrayal of Micky Ward in ‘The Fighter’ in 2010. 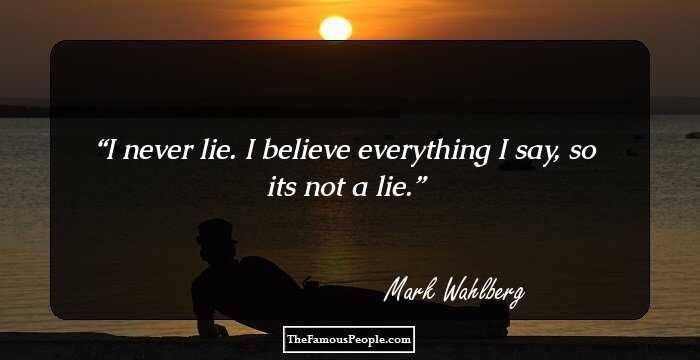 Quotes: Believe
Personal Life & Legacy
He has been in a relationship with model Rhea Durham since 2001 and married her in 2009. The couple has four children.

Quotes By Mark Wahlberg | Quote Of The Day | Top 100 Quotes

See the events in life of Mark Wahlberg in Chronological Order