Dondré Whitfield is an American actor, best known for his 'Emmy'-nominated performance in 'All My Children' and his ‘NAACP’-nominated role in 'Queen Sugar.' He is a former baseball player, too, and has showcased his skills in the sports-oriented film 'Mr. 3000.' Whitfield has displayed his acting skills in movies, TV series, and stage productions, but remains most popular as a TV artist. He has made a string of recurring and regular appearances on shows such as 'The Cosby Show' (1985–1987), 'The Crew' (1995–1996), 'Between Brothers' (1997–1999), 'Hidden Hills' (2002–2003), and 'Inside Schwartz' (2001–2002). The three-time 'Emmy' nominee has also turned into a motivational speaker. He is married to his co-actor Salli Richardson, and they are among the hottest celebrity couples in the U.S. 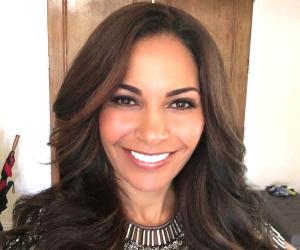 Ezra Miller
Actors #6908
Film & Theater Personalities #16111
DID WE MISS SOMEONE?
CLICK HERE AND TELL US
WE'LL MAKE SURE
THEY'RE HERE A.S.A.P
Quick Facts

American People
New Yorkers Actors
Gemini Actors
American Actors
Actors Who Are In Their 50s
Childhood & Early Life
Dondré Terrell Whitfield was born on May 27, 1969, in Brooklyn, New York, U.S.
He always had a keen interest in acting. He was formally trained in acting at the 'Performing Arts High School' in New York City.
Continue Reading Below
You May Like

Famous Beautiful Women With Green Eyes
Career
Whitfield made his debut in 1985, appearing in the recurring role of 'Robert Foreman' (the love interest of Tempestt Bledsoe's character, 'Vanessa Huxtable') in the ‘NBC’ sitcom 'The Cosby Show.'
After making a single-episode appearance as 'Leon Davis' in the ‘NBC’ sitcom 'Diff'rent Strokes' (1986) and debuting in films with ‘Homeboy’ (as 'Billy Harrison') in 1988, Whitfield appeared as a series regular (1989–1990) in the ‘NBC’ daytime soap opera 'Another World' (as 'Jesse Lawrence'). He made a cameo appearance in 'Homeboyz II: Crack City' the following year.
From 1991 to 1994, he appeared as 'Terrence Frye' in the ‘ABC’ daytime soap opera 'All My Children.' The role earned him his first set of nominations: three for the 'Daytime Emmy Award' for “Outstanding Younger Actor in a Drama Series” and two for the 'Soap Opera Digest Award.'
After finishing his stint in 'All My Children,' Whitfield made his next regular appearance, as 'MacArthur' ''Mac'' Edwards' in the short-lived 'Fox' sitcom, 'The Crew.' Subsequently, he made single-episode appearances on the shows '3rd Rock from the Sun' (as 'Dontaae'), 'The Jamie Foxx Show' (as 'Icepick Isaacs'), and 'Martin' (as 'Trey Foster').
In 1997, he was seen as a series regular in another short-lived 'Fox' sitcom 'Between Brothers' (as ‘James Gordon'). The following year, he played 'Curtis Cook' in eight episodes of the 'Fox' sitcom 'Living in Captivity.'
In 2000, Whitfield portrayed the character 'Davis' in the ‘UPN’ spy-fi drama 'Secret Agent Man.' The show was canceled after its debut season. That year, he was seen in the TV movies 'Alien Fury: Countdown to Invasion' ('Kevin Anjanette') and 'Happy Birthday' (as 'Trent').
Following this, he played 'William Morris' in four episodes of the ‘NBC’ sitcom 'Inside Schwartz' in 2001 and appeared in the ‘UPN’ sitcom 'Girlfriends' (as series regular 'Sean Ellis'). He also appeared in the romantic comedy 'Two Can Play That Game' (as 'Dwain').
From 2002 to 2003, he appeared as 'Zack Timmerman' (co-starring with Tamara Taylor) in the short-lived ‘NBC’ sitcom 'Hidden Hills.'
Whitfield was cast in the 2004 sports comedy 'Mr. 3000,' starring Bernie Mac and Angela Bassett in lead roles. It was a special project for him, as being a former semi-pro baseball player himself, he enjoyed playing a skillet in the film. Coincidentally, he also played baseball professionally at the same time.
Continue Reading Below
Some of Whitfield's brief film appearances were in the 2005 comedy 'The Salon' (as 'Ricky'), the 2011 romantic comedy '35 and Ticking' (as 'Austin'), and the 2012 indie movie 'Middle of Nowhere' (as 'Littleton'). ‘Middle of Nowhere’ premiered at the 'Sundance' festival.
In 2006, he appeared in three episodes of the ‘ABC’ sitcom 'Jake in Progress' (as 'Mark'). He was also seen in the ‘CBS’ supernatural drama 'Ghost Whisperer' (as 'Mitch Marino'), from 2005 to 2006. Along with his wife, he co-hosted the infomercial for the 'TimeLife' music collection 'Midnight Soul.' Whitfield also appeared in a brief recurring role ('Jarrod Jones') in the ‘CBS’ police-procedural drama 'Cold Case' (from 2008 to 2010).
Whitfield (as 'Chaz') and his wife (as the protagonist 'Jessica Brown') again shared screen space in the 2009 film 'Pastor Brown.' He also played a cameo (as his wife's on-screen brother, 'Dr. Marcus Blake') in an episode of the 'SyFy' comedy–drama 'Eureka,' titled 'Smarter Carter.'
Between 2010 and 2014, he had brief recurring roles in the ‘NBC’ sci-fi drama 'The Event' (as 'Mike Garret'), the 'ABC Family' drama 'Make It or Break It' (as ‘Coach McIntire'), and the ‘ABC’ mystery soap opera 'Mistresses' (as 'Paul Malloy').
In 2015, Whitfield made his reality-show debut with the ‘BET’ comedy series 'Real Husbands of Hollywood.' The following year, he started his stint in yet another popular character in the 'Oprah Winfrey Network' drama series 'Queen Sugar.' The series featured him as irrigation specialist 'Remy Newell,' a confidante to 'Ernest Bordelon' (played by Glynn Turman) and the love interest of 'Charley' (played by Dawn-Lyen Gardner). His performance earned him a nomination for the 'NAACP Image Award' for “Outstanding Supporting Actor in a Drama Series” in 2018.
Whitfield's stage credits include his performance as expert burglar and shoplifter 'Bobby Parker' in the 'Long Wharf Theatre' production of 'Ceremonies in Dark Old Men,' in New Haven, Connecticut.
Whitfield's book 'Male vs. Man' throws light on how modern society perceives men. It also speaks a lot about the importance of family dynamics, women empowerment, and child education.
Family & Personal Life
Whitfield has been married to actor Salli Richardson since September 8, 2002. They have a daughter, Parker Richardson Whitfield, and a son, Dre Terrell Whitfield (born on January 24, 2009). Salli Richardson directed a few episodes of 'Queen Sugar.'
Whitfield and Richardson have been featured on the list of the ''10 Hottest Couples'' curated by 'Ebony' magazine. Their wedding ceremony made it to the list of the "Top Weddings of the Year."
An avid athlete, Whitfield has been participating in the 'Jeffrey Osborne Celebrity Softball Classic' for several years now.
He also works as a "transformational coach" and delivers motivational speeches to young men and women. He is an avid golfer and motorcyclist, too.
Trivia
While filming for 'Mr. 3000,' Whitfield demonstrated his love for baseball and honored his all-time favorite shortstop, Ozzie Smith, by wearing uniform number 1 for the character he played. He also celebrated his other favorite player, star shortstop of the 'New York Yankees' Derek Jeter, by using the player's signature baseball gloves in the film.

See the events in life of Dondre Whitfield in Chronological Order