Donald Glover is a multi-faceted person who has carved a niche in every domain that he has set his foot in; be it acting, writing, production, comedy, singing and songwriting. Glover, who initially became known for being the screenwriter of the TV series ‘30 Rock’, made his film debut in ‘The Mystery Team’. He gained even more fame with his popular roles in the movie ‘The Lazarus Effect’, as well as the TV series ‘Atlanta’. As a singer, he released his debut album ‘Camp’ in which peaked at number 11 on the US Billboard 200 and became a huge success. He released two more albums, ‘Because the Internet’ and ‘Awaken, My Love!,’ over the ensuing years. On the acting front, he recently played an important supporting role in the film ‘Spiderman: Homecoming’. He will also be providing the voice of Simba in the remake of the popular animated movie ‘The Lion King’. Clover has been nominated for thirty-seven awards till date, out of which he has won fifteen. The awards he has won include an America Film Institute Award and two Golden Globe Awards. He has been nominated for two Grammy Awards as well. American People
Rappers
Musicians
Black Actors
Black Rappers
Childhood & Early Life
Donald McKinley Glover was born on 25 September 1983, at Edwards Air Force Base in California in the United States. His parents Beverley Smith and Donald Glover raised him in Stone Mountain, Georgia. His mother worked as a daycare provider while his father was a postal worker.
Glover, who was raised as a Jehovah’s Witness, attended the ‘DeKalb School of the Arts’. Later, he attended New York University’s Tisch School of the Arts, from where he graduated in 2006 with a degree in dramatic writing. 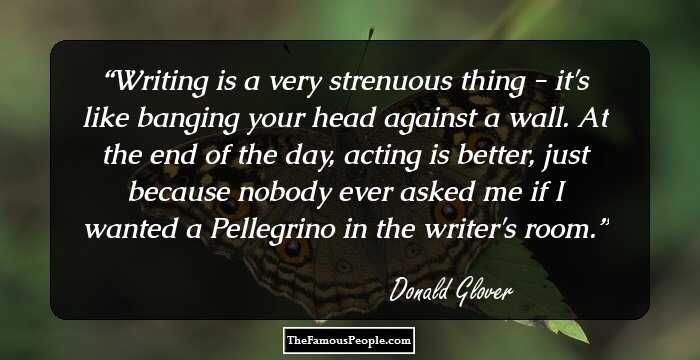 Black Singers
Black Musicians
Stand-up Comedians
Black Stand-up Comedians
Career
Donald Glover sent some writing samples to talent manager David Miner who showed his works to Tina Fey, the creator of the sitcom ‘30 Rock.’ Impressed by his writing skills, Miner and Fey invited him to work as a writer in the comedy series ’30 Rock’. The show was a huge success and went on to receive numerous awards including six Golden Globe Awards and eleven Screen Actors Guild Awards. Glover also made a few cameo appearances in some episodes.
In 2009 he starting appearing in a supporting role of a highschool footballer trying to embrace his nerdy side in the TV series ‘Community.’ Glover, however, left the show during the fifth season, and refused to make a comeback, saying that the show would do much better without him and his character.
In 2009 he also made his film debut in the film ‘Mystery Team’. Directed by Dan Eckman, the story is about a team of naïve young detectives, who take up a case of homicide in order to prove themselves. Glover appeared in the lead role, and other actors in the cast included DC Pierson, Dominic Dierkes, Aubrey Plaza and Ellie Kemper.
His debut studio album ‘Camp’ was released in November 2011. Debuting at number 11 on the Billboard 200, the album turned out to be a huge hit, and sold 52,000 copies within the first week of its release. Two years later, he released his second album ‘Because the Internet’, which was also quite successful. It sold 96,000 copies in the first week of its release.
Meanwhile he continued playing supporting roles in episodes of several TV shows, such as ‘Sesame Street’ and ‘Adventure Time’. He also provided the voice of Miles Morales in the animated show ‘The Ultimate Spiderman’ which had aired from 2015. He appeared in the popular sci-fi horror movie ‘The Lazarus Effect’ the same year.
His latest album ‘Awaken, My Love!’ was released in 2016. Like his previous albums, it also became an instant hit, peaking at fifth position on the Billboard 200. It sold 72,000 copies in the first week of its release. 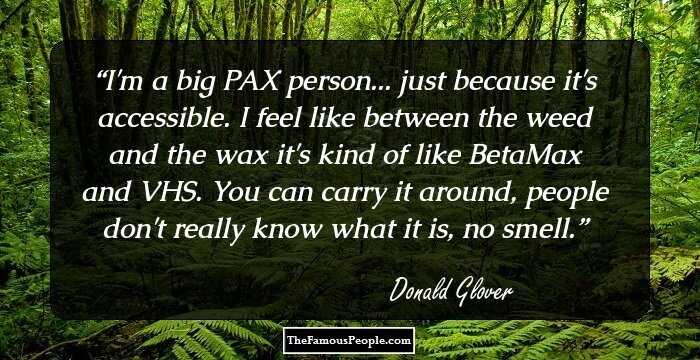 Black Film & Theater Personalities
American Men
California Actors
California Musicians
Major Works
‘Camp’, Donald Glover’s first studio album, is one of the most important works in his career. The album debuted at number 11 on the Billboard 200, and sold 52,000 copies within the first week of release. It also peaked at number 22 on the Canadian Albums, and at number 99 on the Australian Albums. Featuring singles such as ‘Fire Fly’, ‘All the Shine’, and ‘Letter Home’, the album sold more than 240,000 copies within two years. It received mostly positive reviews from critics.
‘The Lazarus Effect’ a popular American 2015 sci-fi horror movie is among the most significant works in Glover’s career. The movie, which was directed by David Gelb, revolves around a serum which has the ability to bring the dead back to life. Alongside Glover, the movie also starred actors Mark Duplass, Olivia Wilde, Evan Peters, and Sarah Bolger. It was a commercial success though it received mostly negative reviews.
‘Awaken, My Love!,’ his latest album, was released in December 2016. It peaked at fifth position on the Billboard 200, and sold 72,000 copies within the first week. It also reached number two on the US Top R&B/Hip-Hop Albums chart. Its lead single was ‘Me and Your Mama’. Other singles in the album include ‘Zombies’, ‘Riot,’ and ‘Redbone’. The album received mostly positive reviews.
His major works also include ‘Atlanta’, an American TV series which started airing from 2016. The show, which was created by Glover himself, also starred him in the lead role. The series turned out to be quite a success, and won several awards including two Golden Globe Awards.
Recommended Lists:

New York University
Libra Actors
Libra Singers
Libra Rappers
Awards & Achievements
In his career so far, Donald Glover has been nominated for a total of thirty-seven awards, out of which he has won fifteen. Some of the awards he has won include ‘The Comedy Award’ in 2012 for Breakout Performance of the Year for his role in the TV series ‘Community’, and two Golden Globe Awards in 2017 for Best Television series and Best Actor for the TV series ‘Atlanta.’ 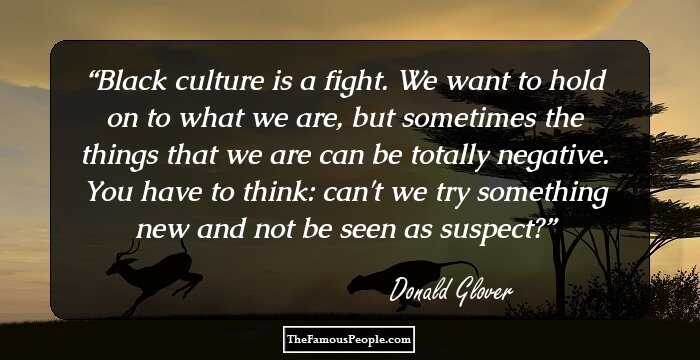 Male Singers
Male Rappers
Libra Musicians
Male Musicians
Personal Life
In early 2016, Donald Glover revealed that he had become a father, though it is still unknown who the mother of the child is, as Glover has kept his personal life very private. However, it is known that the child is a boy named “Legend.”
Recommended Lists:

Quotes By Donald Glover | Quote Of The Day | Top 100 Quotes

See the events in life of Donald Glover in Chronological Order