(American Actor Who is Known for His Roles in Romantic Comedy, Western, and Drama Films)

Dermot Mulroney is an American actor who is best known for his roles in romantic comedy films. He had an inclination towards acting since childhood and joined a children’s community theatre at a very young age which was followed by a stage performance in ‘Are Teachers Human’ during his student life. Dermot obtained a degree in Bachelors of Fine Arts (BFA) from Northwestern University, Chicago, Illinois. He started his on-screen journey with the television movie ‘Sin of Innocence’ and ventured into feature films as well. Two of his most popular and highest grossing movies include ‘Young Guns’ and ‘My Best Friend’s Wedding’. With his excellent acting talent and appealing personality, Dermot Mulroney has succeeded in making an impact in Hollywood and in the hearts and minds of his fans all across the globe. Mulroney has been honored with numerous awards and nominations such as the Artistic Achievement Award, Golden Space Needle Award, and Award for Best Actor in Milano International Film Festival and many more. Dermot Mulroney has been married twice and divorced once; he has one son and two daughters. American People
American Men
Virginia Actors
Northwestern University
Scorpio Actors
Childhood & Early Life
Dermot Mulroney was born on October 31, 1963 in Alexandria, Virginia. His mother, Ellen was originally from Manchester and was a homemaker and amateur actress. His father, Michael Mulroney was originally from Elkader and was a law professor in Villanova University.
He has one sister, Moira, and three brothers, Conor, Kieran and Sean. Moira works in a non-profit industry and Kieran is an actor.
Dermot had a fondness for acting since his childhood which made him join a children’s community theatre followed by a stage performance in ‘Are Teachers Human’.
He had started playing the cello at the age of seven and began performing with youth orchestra. He completed his graduation in 1981 from T.C. Williams High School. He obtained his degree in Bachelors of Fine Arts (BFA) in 1985 from Northwestern University, Chicago, Illinois. 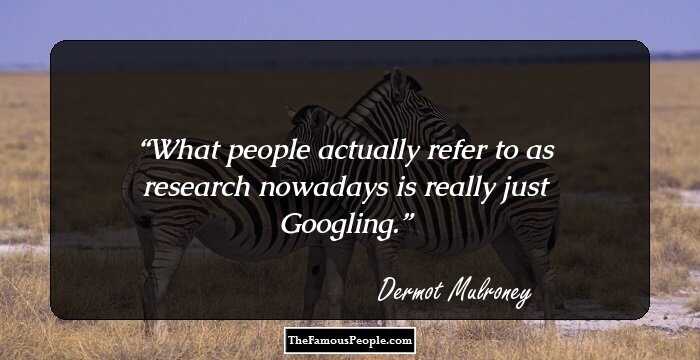 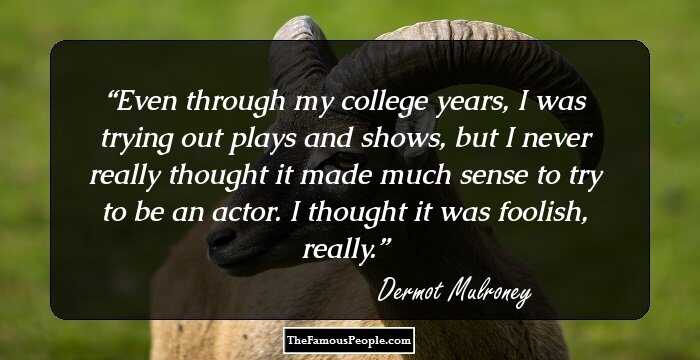 Major Works
Dermot Mulroney is best known for his role in ‘Young Guns’ in 1988. He portrayed “Dirty Steve" Stephens in the movie. The film was a big hit and opened at no. 1 at the box office.
His movie ‘My Best Friend’s Wedding’ in 1997 opposite Julia Roberts and Cameron Diaz earned more than $299 million worldwide.
His performance in Alexander Payne's ‘About Schmidt’ in 2002 earned Dermot a lot of critical praise and his worth as an actor rose considerably.
He also had a significant supporting act in the biopic of Steve Jobs ‘Jobs’ in 2013. In this film Mulroney appeared as Mike Markkula, an angel investor who provides financial support to Steve Jobs at the time of the founding of Apple Computer, Inc.
Continue Reading Below
Awards & Achievements
Dermot Mulroney won the Jury Special Prize in Artistic Achievement Award for ‘Bright Angel’ in 1990.
He won Golden Space Needle Award - Best Actor in Seattle International Film Festival for ‘Where the Day Takes You’ in 1992.
He was nominated for Best Kiss with Winona Ryder in MTV Movie Awards in 1996 for ‘How to Make an American Quilt.’
He won the Artistic Achievement Award at the Philadelphia Film Festival in 2007.
In 2013, he along with the other cast members of ‘August: Osage County’ were awarded the Hollywood Film Award for Ensemble of the Year. 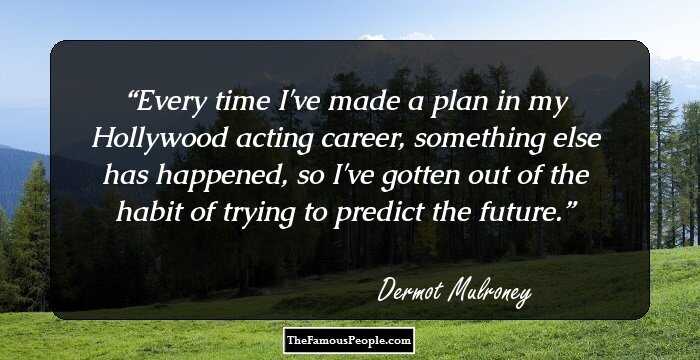 Quotes: Trying
*Personal Life & Legacy
He met his first wife, Catherine Keener, in 1987 during the shoot of ‘Survival Quest’ and married her in 1990. The couple had a son, Clyde Keener Mulroney, on June 21, 1999. They separated in May 2005 and filed for divorce in June 2007 which was finalized on October 31, 2007.
He married his second wife, Tharita Catulle, in 2008. The couple has two daughters, Mabel Ray Mulroney and Sally Mulroney.
Trivia
Dermot Mulroney shares his birthday with the funnyman Rob Schneider.
He is a good friend of the Hollywood Actor, Brad Pitt.
He joined a band with the name The Low & Sweet Orchestra.
Mulroney is a joint owner of The Double Door which is a popular club in Chicago.

Quotes By Dermot Mulroney | Quote Of The Day | Top 100 Quotes

See the events in life of Dermot Mulroney in Chronological Order