Denis Leary made his mark as a stand-up comedian in the 1990s. His shows censured all that he found wrong in politics, society and culture of America. From stage shows, he graduated to television shows and television commercials. His mannerism is brash and language disagreeable. His dialogue delivery is fast and is described as ranting. His shows are punctuated with songs that make us laugh and think. He has acted in several movies and found success, both, in comic and serious roles. He has won many nominations and awards for his acting and writing efforts on the small screen. A man with definite views, he has always been outspoken. His admiration for firefighters made him act promptly during the September 11, attacks in raising charity. Despite his success, he has been on the receiving end of brickbats. His views on autism were criticized and he had to apologize to parents of autistic children. Professionally, charges of plagiarism have been leveled against him. Many critics feel that his act has many similarities to those of his former friend and less successful fellow comedian Bill Hicks, an allegation that he rejects. He believes that a little controversy can help comedians get noticed. American People
Comedians
American Men
Massachusetts Actors
Emerson College
Childhood & Early Life
Denis Leary was the second of four children of the Irish immigrant couple, Nora, a maid, and John, a mechanic. He was brought up in Worcester, Massachusetts.
He attended Saint Peter-Marian High School, in Worcester and aspired to be a professional hockey player, until he saw the Martin Scorsese movie, ‘Mean Streets’ after which he decided to be an actor.
After graduating from high school in 1975, he joined Emerson College, Boston to study theater. Here, he came in contact with many other talented comedians and formed the ‘Emerson Comedy Workshop’. 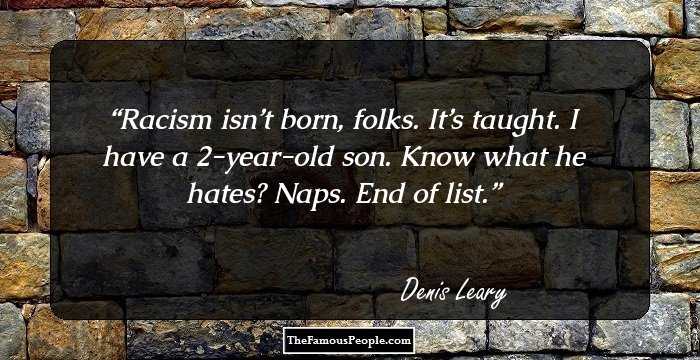 Famous Beautiful Women With Green Eyes
Career
Leary graduated from Emerson College in 1979 and was offered the job of teaching comedy writing at the college. He accepted and continued for five years during which he fine-tuned his skills.
In 1980, he featured on ‘The Late Show’, a local comedy series. The show was hosted by his friend, ‘Lenny Clarke’ and was written by comedy writer Martin Olson.
He was also featured in the ‘Remote Control’, a MTV game show, which was co-hosted by Colin Quinn and Andy Warhol. He imitated Keith Richards of the ‘Rolling Stones’ in one of his routines.
His first real break came in 1990 with the gig, ‘Rascals Comedy Club’ which was part of ‘Rascals Comedy Hour’. He mastered and executed his high speed ranting.
His rantings during the 1990s for the music band REM and their song ‘Shiny Happy People’ on the MTV sketch earned him not only celebrity status but several MTV commercials as well.
In 1994, he played the lead role of a burglar in ‘The Ref’ who takes a bickering married couple as hostage and ends up helping them reconcile their differences.
In 1997, he released his second album called ‘Lock n Load’ which featured his stand up skits and songs. The album, televised for HBO television Special, was directed by Ted Demme.
He founded the ‘Leary Firefighters Foundation’ in 2000 as a response to the death of a cousin, a firefighter, and donated over $2 million to fire departments for equipment, vehicles and training purposes.
He lent his voice to Diego, a ferocious wild cat that turns good, in the animation film, ‘Ice Age’ in 2002. The film, a family entertainer, was a huge hit and his work was well received.
Continue Reading Below
His television project, ‘Rescue Me’ began in 2004, which highlighted the hazards faced by the firefighters in Manhattan in the wake of the Sep 11 attacks and is interspersed with comic elements.
In his 2008 book, ‘Why We Suck: A Feel Good Guide to Staying Fat, Loud, Lazy and Stupid’, he criticized the trend of over-diagnosis of autism, an excuse for lazy parents.
In 2009, Leary began an eleven day ‘Rescue Me Comedy Tour’ in New Jersey. Basically, a stand-up comedy show, it co-starred his buddies Lenny Clarke and Adam Ferrara. 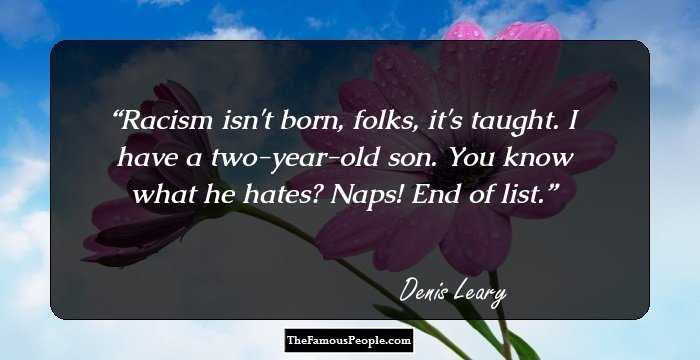 Quotes: You, I
Major Works
In 1993, Dennis Leary recorded ‘Asshole’, a sarcastic song about the typical American man. It was voted No. 1 by an Australian youth poll and became No. 58 in the UK Singles Chart.
‘No Cure For Cancer’, a DVD of his standup comedy was released in 2004. It covered topics such as smoking, drugs, vegetarians and political correctness. He intended indirect messages for the audience.
His supporting role as George Stacy in the movie, ‘The Amazing Spider-Man’ in 2012 was appreciated by critics. The film was a massive box office success, grossing over $752 million worldwide.
Awards & Achievements
In 1992, ‘No Cure for Cancer’ won two international awards—the ‘Critic Award’ at the Edinburgh International Arts Festival and the ‘Recommendation Award’ at the BBC Festival.
‘National Lampoon's Favorite Deadly Sins’, a 1995 comedy TV-film about lust, greed and anger in the show business won him the ‘Best Directing in Comedy CableACE Award’.
Between 2005 and 2008, he was nominated in the ‘Best Actor’ and ‘Best Supporting Actor’ categories for Emmy, Satellite, Prism and Golden Globe Awards. 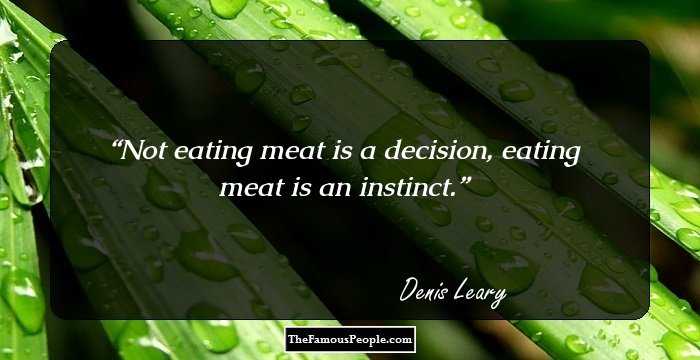 Personal Life & Legacy
Denis Leary got married to Ann Lembeck in 1989 and they are the doting and proud parents of two children – son, John Joseph Jack, and daughter, Devin. He attributes his humor to his happy marriage.
He is an ardent admirer of Barack Obama, who, he believes is the best president, the country ever had.
Trivia
This famous comedian claims that people often mistake him for Willem Dafoe, the American film actor who played the role of ‘Green Goblin’ in the 2002 film ‘Spiderman’.
This famous actor received an honorary doctorate from his alma mater, Emerson College, Boston, which according to him had the best creative talents and teachers.

Quotes By Denis Leary | Quote Of The Day | Top 100 Quotes

See the events in life of Denis Leary in Chronological Order