David Wayne Spade is an American actor, comedian, and television personality. He became popular in the 1990s as a cast member of‘Saturday Night Live’(SNL) in which he created character sketches, parodied celebrities, and contributed material to Dana Carvey. During his stint in SNL, he became close friends with Chris Farley and acted in a couple of commercially successful films with him. He then played central characters in some movies, which were not successful. He was then cast in the sitcom ‘Just Shoot Me,’ which ran for seven seasons.His portrayal of ‘Finch’ in the series earned him ‘Golden Globe’ nominations. He went on to host award shows and also voiced several animated characters. He was also part of the cast of ‘8 Simple Rules’ and ‘Rules of Engagement.’ He hosted his own show titled ‘The Showbiz Show with David Spade’ on Comedy Central, which was designed to be similar to his ‘Hollywood Minute’ segment on SNL. His high pitched voice, sarcastic one-liners, and childish stage personality have become his trademarks. Ryan Reynolds
22nd July In History
DID WE MISS SOMEONE?
CLICK HERE AND TELL US
WE'LL MAKE SURE
THEY'RE HERE A.S.A.P
Quick Facts

Spade was born on July 22, 1964, in Birmingham, Michigan, USA, to Judith, a writer and magazine editor, and Wayne M. Spade, a sales representative. His brothers are Bryan and Andy Spade.

When he was four, the family moved to Scottsdale, Arizona. He attended ‘Saguaro High School’ and ‘Scottsdale Community College,’ before transferring to ‘Arizona State University.’ He graduated with a business degree in 1986.

He was a member of the ‘Sigma Alpha Epsilon’ fraternity and performed standup comedy at the university's long-running sketch comedy show‘Farce Side Comedy Hour.’ 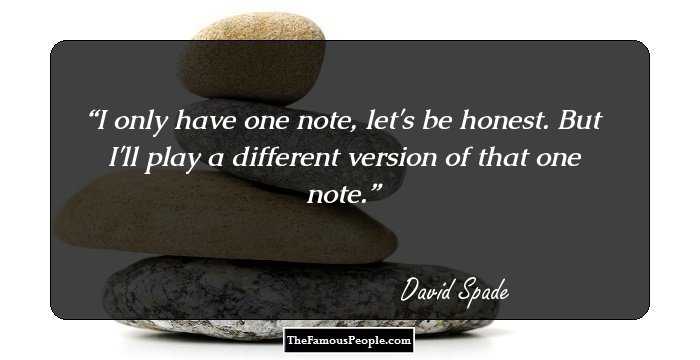 With the help of his friend and fellow comedian Dennis Miller, Spade joined ‘Saturday Night Live’ in 1990 as a regular cast member and writer. He got noticed for his impersonation skills.

He enjoyed success as a cast member of ‘Saturday Night Live.’ He became popular for his brand of sarcasm. The characters that he played in a number of sketches became popular among the audience. He also impersonated several celebrities, such as Michael J. Fox and Brad Pitt.

He stayed with SNL till 1996 and wrote materials, which were used by Dana Carvey to perform on the show. After leaving the show, he has madeguest appearances, hosting some of the episodes of the show.

‘Tommy Boy,’ a 1995 adventure comedy, starred him with former SNL cast members and close friend Chris Farley. The film is about a socially and emotionally immature man who learns about friendship and self-worth.

He starred with Farley in ‘Black Sheep,’ a 1996 comedy film.

He played the title role of ‘Joe Dirt’ in the 2001 adventure comedy film alongside Dennis Miller and Christopher Walken. The film was a moderate commercial success but received negative reviews from critics.

‘Dickie Roberts: Former Child Star,’ a 2003 comedy film, starred him opposite Mary McCormack. He portrayed a child actor who slides into obscurity as an adult.

From 2002 to 2006, he appearedregularly in commercials for ‘Capital One,’ portraying an employee of a fictional rival company whose policy toward honoring credit card rewards (and almost everything else) is "always no."

In 2004, he joined the cast of ‘8 Simple Rules,’ following the death of the sitcom's star actor John Ritter. He played‘C.J. Barnes,’ the wayward nephew of ‘Cate.’

‘Rules of Engagement,’ a sitcom that ran on CBS from 2007 to 2013, had him playing ‘Russell Dunbar,’ a shallow, womanizing single friend of the main characters.

Meanwhile in 2006, he voiced ‘Sparx’ in the popular video game ‘The Legend of Spyro: A New Beginning.’

In ‘Grown Ups 2,’ a 2013 buddy comedy film directed by Dennis Dugan and produced by Adam Sandler, he starred alongside Sandler and Kevin James. He wasearlier seen in the film’s prequel‘Grown Ups.’

In 2013, he voiced ‘Boss Cain’ in the English version of the Chinese computer-animated film ‘Jungle Master.’ 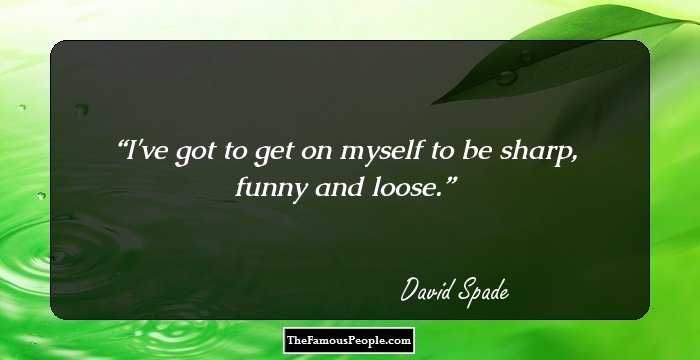 ‘Just Shoot Me!’ is an American television sitcom that aired for seven seasons on NBC from 1997 to 2003. David Spade played a smart-mouthed assistant named ‘Dennis Finch’ who works for the fictional fashion magazine ‘Blush.’

‘The Showbiz Show with David Spade’ was a weekly television program on Comedy Central that aired between 2005 and 2007. It was a parody of celebrity news programs, such as ‘Entertainment Tonight’ and ‘Access Hollywood.’

In 1996, Spade won the ‘MTV Movie Award’for the ‘Best On–Screen Duo’ for the movie ‘Tommy Boy.’ He shared the award with his fellow co-star and good friend Chris Farley.

He was twice nominated for the ‘Golden Globe Award’under the ‘Best Performance by an Actor in a Supporting Role in a TV Series’ category for ‘Just Shoot Me.’

He was honored with a star on the ‘Walk of Fame’ under the ‘Motion Picture’ category in 2003 at 7018 Hollywood Boulevard.

He has the dubious distinction of winning the 2012 ‘Razzie Award’under the ‘Worst Supporting Actress’ category for his role ‘Monica’ in the comedy film‘Jack and Jill.’ 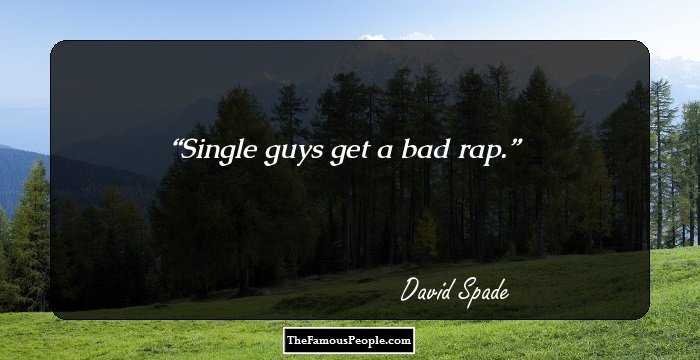 David Spade has never been married. However, he was in a relationship with Playboy Playmate Jillian Grace with whom he has a daughter named Harper; the paternity was confirmed in 2008.

In 2005, he donated $100,000 to the police department in his hometown of Phoenix, as part of a program designed to provide patrol officers with rifles.

Born on the same day as actor/comedian John Leguizamo, this stand-up comedian also shares his birthday with many other celebrities, including Alex Trebek, Willem Dafoe, and Danny Glover.

This comedian-actor is very sensitive to light.Speaking of his condition he said, “I have to wear a hat even indoors and flashes in particular freak me out.”

Quotes By David Spade | Quote Of The Day | Top 100 Quotes

See the events in life of David Spade in Chronological Order