Danny Kaye was an American actor and comedian famous for his dancing, impersonations and improvisations. He was also a singer and a successful recording artist blessed with great dancing skills. As a comedian he was much loved for his physical comedy, eccentric pantomimes, and funny rapid-fire novelty songs. A highly versatile man, he was not just a popular performer, but also a jet pilot, Chinese chef, and a humanitarian. Born to Ukrainian Jewish immigrants in Brooklyn, he became interested in singing, dancing and performing at a young age. His mother died when he was in his early years and he soon ran away from home with a friend and started earning his livelihood by performing on the streets. He did not graduate from high school and worked in a series of jobs as a young man. He finally found his big break when he was selected by a vaudeville dance act that toured all over the United States and also went to Asia and the Far East. He soon built a reputation as a vaudeville singer and comedian and eventually entered films. After starring in a few low-budget movies he found success as a film actor in the 1940s and 1950s. He was also a humanitarian who devoted a lot of time to charitable causes and had served as ambassador at large for the United Nations Children's Fund in the 1950s
Continue Reading Below American Celebrities
Actors
Dancers
Singers
American Men
Childhood & Early Years
He was born as David Daniel Kaminsky to Ukrainian Jewish immigrants in Brooklyn on January 18, 1911. His parents were Jacob and Clara Nemerovsky Kaminsky, and he had two elder brothers.
He received his early education from a public school in Brooklyn before moving to Thomas Jefferson High School. As a school student he loved entertaining his classmates with songs and jokes. He did not graduate from high school.
His mother died when he was in his early teens and soon after his mother’s death, he ran away with a friend to Florida. The two boys eked out their living as street performers for some time before returning home.
His father understood his young son and gave him the chance to discover his abilities instead of forcing him to return to school. David struggled to find a job he liked—he worked in a series of small jobs but was unable to successfully establish himself in any profession. 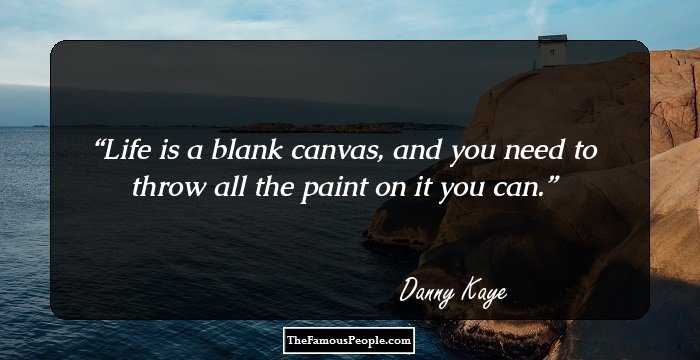 Quotes: You, Life, Need
Continue Reading Below
You May Like

The Best Black Actresses Of All Time
Career
He received a big break in 1933 when he was selected as a member of the "Three Terpsichoreans", a vaudeville dance act. He adopted the name “Danny Kaye” at this time. The act first toured the United States before travelling to Asia to perform with the show La Vie Paree.
Danny went to the Far East with the troupe in February 1934. While they were in Osaka, Japan, a typhoon hit the city. At the time of the performance, the city was in the grip of the storm and the audience was getting very nervous. There was also no power supply. Yet, he went on stage and tried his best to soothe and calm the audience with his performance.
Working with the troupe and performing in countries where the audience did not understand English led Danny Kaye to develop routines which combined pantomime, gestures, songs, and facial expressions, eventually resulting in his signature style.
Danny Kaye soon ventured into films as well and made his film debut in a comedy short ‘Moon Over Manhattan’, in 1935. Over the next few years he played the stereotypical role of a manic, dark-haired, fast-talking Russian in a series of low-budget films.
During the late 1930s and early 1940s, he along with his new wife Sylvia, performed at La Martinique, a New York City nightclub. He had a successful stint there and his performance got him noticed by the playwright Moss Hart who cast him in his hit Broadway comedy ‘Lady in the Dark’.
His portrayal of Russell Paxton in ‘Lady in the Dark’ in 1941 catapulted him to nationwide fame. His foot-tapping number "Tchaikovsky", by Kurt Weill and Ira Gershwin proved to be a huge hit with the audiences.
He found great success as a movie star in the 1940s and 1950s, and appeared in films such as ‘The Secret Life of Walter Mitty’ (1947), ‘The Inspector General’ (1949), ‘On the Riviera’ (1951), ‘Knock on Wood’ (1954), ‘White Christmas’ (1954), ‘The Court Jester’ (1956), and ‘Merry Andrew’ (1958).
He was also a talented singer who began hosting his own CBS radio program in the 1940s, launching a number of hit songs, including ‘Dinah’ and ‘Minnie the Moocher’. He released his self-titled debut album in 1949 which was followed by the release of a single ‘I've Got a Lovely Bunch of Coconuts’ in 1950.
In the late 1950s, he became interested in learning to aviate. He went on to become an accomplished pilot and could fly airplanes ranging from single-engine light aircraft to multi-engine jets. He held a commercial pilot's license and supported many flying projects.
Continue Reading Below
He loved cooking and built a kitchen with a multi-wok stove in the alley of his home. He specialized in Chinese and Italian cooking and taught Chinese cooking classes at a San Francisco Chinese restaurant in the 1970s. 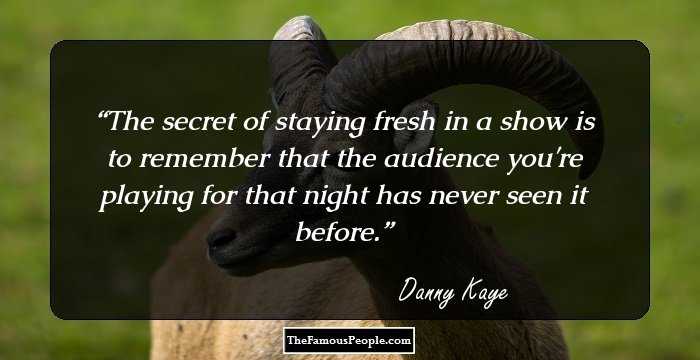 Quotes: Never
Major Works
He found his breakthrough as a film actor with his role in the musical comedy film ‘On the Riviera’ which was based on the play ‘The Red Cat’ by Rudolph Lothar and Hans Adler. The film was not just a commercial success, but also a critically acclaimed one.
His portrayal of Jewish refugee S. L. Jacobowsky in the film ‘Me and the Colonel’ was another one of his famous roles. He played the character of a man who has to flee from the Nazis during the World War II invasion of France by Nazi Germany.
Philanthropic Works
Danny Kaye was closely involved with UNICEF. He educated the public about the conditions of impoverished children living overseas and helped in the distribution of donated goods and funds. He performed a lot of humanitarian work in association with UNICEF and even served as its first ambassador-at-large. 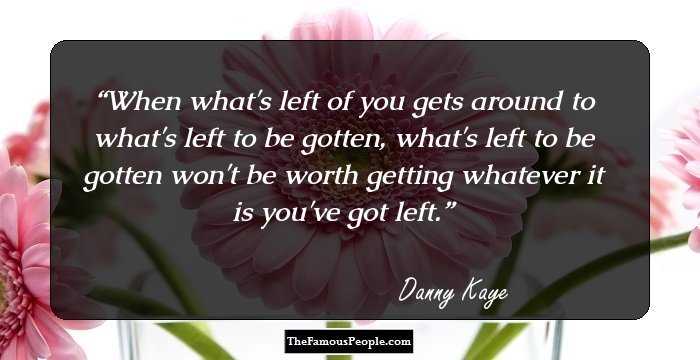 Quotes: You
Awards & Achievements
He won the Golden Globe Award for Best Actor-Motion Picture Musical or Comedy twice: one for ‘On the Riviera’ (1951) and the other for ‘Me and the Colonel’ (1958).
His cookery skills won him the "Les Meilleurs Ouvriers de France" culinary award, making him the only non-professional chef to achieve this honor.
He was awarded the cross of the Knight of the Dannebrog, 1st Class, and Chevalier of the French Legion of Honor for his work with UNICEF.
He was posthumously awarded the Presidential Medal of Freedom by President Ronald Reagan in June 1987.
Personal Life & Legacy
Danny Kaye married Sylvia Fine, the daughter of a dentist, in 1940. They were blessed with one daughter in 1946. His wife was an audition pianist.
He became estranged from his wife around 1947 though they never officially divorced. Following his estrangement he became involved in a series of relationships with many women.
He suffered from heart problems during the later years of his life and had quadruple bypass heart surgery in February 1983 during which he contracted hepatitis C from a blood transfusion. He died of heart failure on March 3, 1987, at the age of 76.

See the events in life of Danny Kaye in Chronological Order