Advanced Search
Amy Adams is an American actor, best known for playing ‘Brenda Strong’ opposite Leonardo DiCaprio in Steven Spielberg's biographical crime film ‘Catch Me If You Can.’ She has won many awards, including the prestigious ‘Golden Globe Awards’ and ‘British Academy Film Awards.’ Adams initially wanted to become a singer and ballet dancer, but later on decided to concentrate only on dancing. She initially worked at dance theatres before shifting her attention towards working in movies. After struggling in the initial part of her career, she struck gold with the ‘Disney’ movie ‘Enchanted,’ which increased her popularity in Hollywood. Prior to appearing in ‘Enchanted,’ she had made a name for herself as an accomplished television actor by starring in series, such as ‘Buffy the Vampire Slayer’ and ‘The West Wing.’ Amy Adams has been nominated for the ‘Academy Award’ on multiple occasions in her career. She has also been nominated for other prestigious awards, such as ‘Primetime Emmy Awards,’ ‘People's Choice Awards,’ ‘MTV Movie Awards,’ and ‘Critics' Choice Movie Awards.’ American People
Leo Actresses
American Actresses
Actresses Who Are In Their 40s
Women Film & Theater Personalities
Childhood & Early Life
Amy Adams was born on August 20, 1974, in Vicenza, Italy, to American parents Richard Adams and Kathryn Adams. Her father was employed with the ‘US Army’ and was posted in Italy for some time. Amy has six siblings – four brothers and two sisters.
She spent her early childhood in Italy. It was only when she was eight-years-old that she returned to America along with her family. The Adams family started living in a home in Castle Rock, Colorado and Amy Adams took admission in ‘Douglas Country High School.’
Amy Adams was interested in choir music and ballet dancing from a young age. In fact, she enrolled herself in a dance company when she was still a child. Initially, she wanted to become an athlete, but later on realized her passion for performing arts.
Her parents divorced when she was 11-years-old. After graduating from high school, Amy Adams decided to live with her mother in Atlanta. She was not interested in attending college as she wanted to hone her skills in musical theatre. It was during this stage in her life that she decided not to pursue ballet as she thought she did not have the wherewithal to pursue ballet as a career.
In order to take care of her expenses, Amy Adams worked for ‘Gap’ as a store employee and later worked for ‘Hooters.’ 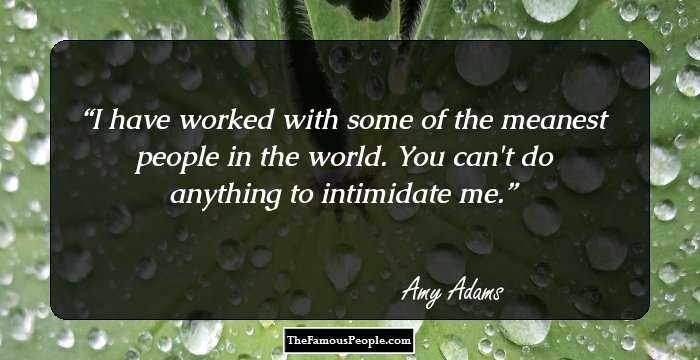 Quotes: You, Me, I
Continue Reading Below
Career
Amy Adams started working as a dancer for several theatre companies in 1995. She received her big break when she moved to Minnesota in order to work for the ‘Chanhassen Dinner Theatre.’ It was during this time that she decided to give Hollywood a shot.
In 1999, Amy Adams auditioned for a role in the film ‘Drop Dead Gorgeous’ and was successful in landing the role. The film wasn’t a success and Adams relocated to Los Angeles, which proved to be a good move as she landed a role in the ‘Fox TV’ series ‘Manchester Prep.’ However, the show did not last long.
In 2000, Amy Adams started acting in several popular TV series like ‘The West Wing’ and ‘Buffy the Vampire Slayer’ among others. Two years later, she was cast by Steven Spielberg to play a pivotal role in the Leonardo di Caprio-starrer ‘Catch Me If You Can.
In 2005, Adams landed a role in the movie ‘Junebug.’ Her role in the film, which was directed by Phil Morrison, was praised by the critics and she went on to win several awards for playing ‘Ashley Johnsten’ in the film. Her performance in ‘Junebug’ landed her several other roles in films like ‘The Wedding Date’ (2005), ‘Standing Still’ (2005), ‘Talladega Nights’ (2006), and the commercially successful ‘Disney’ film ‘Enchanted’ (2007).
In 2007, Amy Adams acted alongside popular Hollywood actors like Tom Hanks and Seymour Hoffman in the movie ‘Charlie Wilson’s War.’ The following year, she appeared as the female lead in the film ‘Sunshine Cleaning.’
In 2008, Amy Adams was cast in the role of ‘Sister James’ in the film ‘Doubt,’ which also starred actors like Seymour Hoffman and Meryl Streep. Adams’ performance was praised by the critics and audiences alike. It did not come across as a surprise when she was nominated for ‘Best Supporting Actress’ at prestigious award ceremonies, such as the ‘Academy Awards’ and ‘Golden Globe Awards’ for her role in ‘Doubt.’
The year 2009 was a particularly productive year for Adams as she first starred in the hugely successful film ‘Night at the Museum 2: Battle of the Smithsonian’ alongside Ben Stiller. She then teamed up with Meryl Streep for the movie ‘Julie & Julia.’ Amy Adams’ performance in the film was appreciated by leading film critics at the time.
From 2010 onwards, Adams started working in a number of successful films, such as ‘Leap Year’ and ‘The Fighter.’ Her performances earned her rave reviews. She was nominated under the ‘Best Supporting Actress’ category at many award ceremonies, such as ‘BAFTA,’ ‘Academy Award,’ ‘Screen Guild Awards’ and ‘Golden Globe Awards.’ During the same period, she was also nominated for several awards for her performance in the film ‘The Master.’
In 2013, Amy Adams became a part of the ensemble cast for the film ‘American Hustle.’ Her role as a con artist earned her the ‘Golden Globe Award’ for ‘Best Supporting Actress.’ The following year, she received the ‘Golden Globe Award’ for ‘Best Actress’ for her performance in the movie ‘Big Eyes.’
From 2016 to 2018, Amy was cast in many films like ‘Batman v Superman: Dawn of Justice,’ ‘Arrival,’ ‘Nocturnal Animals,’ ‘Justice League,’ and ‘Vice.’
In 2018, she played the role of ‘Camille Preaker,’ an alcoholic reporter discharged from a psychiatric hospital, in the ‘HBO’ miniseries ‘Sharp Objects.’ The same year, she joined the cast of an American mystery thriller drama film titled ‘The Woman in the Window.’ On April 2019, she was cast to play ‘Bev Vance’ in a film titled ‘Hillbilly Elegy,’ which is based on J. D. Vance's memoir of the same name.
Major Works
Her role in ‘Enchanted’ is considered her most famous work, for which she was nominated for an ‘Academy Award.’ Her performance in the film ‘American Hustle’ gave her recognition and earned her the ‘Golden Globe Award’ for ‘Best Supporting Actress.’
Awards & Achievements
Amy Adams has been nominated for the ‘Academy Award’ for ‘Best Supporting Actress’ on multiple occasions. She has won two ‘Golden Globe Awards’ - one for ‘Best Supporting Actress’ for the film ‘American Hustle’ and another for ‘Best Actress’ for the film ‘Big Eyes.’
Personal Life & Legacy
Amy Adams started a relationship with actor Darren Le Gallo in 2001. They got married in 2015. The couple has a daughter who was born in 2010.

See the events in life of Amy Adams in Chronological Order