Male Singers
Gemini Singers
American Singers
Male Pop Singers
The Meteoric Rise to Stardom
In the year 2013, Daniel Skye got a major boost to his career when he became an Instagram verified musician. His popularity started to grow when he started to compose his own songs. As not every singer can manage this feat, Daniel Skye’s songs stood out from other top singers in the USA. Till date, he has sung and released three original music videos (the lyrics for which are written by himself), viz. ‘LoveSick Day’, ‘Maybe’, and ‘All I Want’ (which also featured Cameron Dallas). The first of these songs ‘Maybe’ was out in the year 2015. It got over four million views on YouTube and has even earned a lot of money for Daniel Skye through advertisements. All these original songs written by him were big hits and have caught up with his fans around the world. He got recognition as a national level singer when his ‘All I Want’ song climbed to the number 12 position in the iTunes Pop charts. The song also stood out in the top five lists of music charts of many other countries and got over six million views on YouTube.
Daniel Skye tours the whole country and keeps giving performances along with other artistes. Some of his popular tours include MagCon, Sunsation, June’s Digifest, and Digitour United26. By the beginning of 2017, Daniel Skye had a total of 2.3 million followers on Instagram, 766K followers on Vine, 644K followers on Twitter, and a total of 333K subscribers to his YouTube Channel. In order to further improve his popularity, Daniel Skye is now said to be planning to release his own album. He has recently moved to Los Angeles from Hollywood and has started working with music producers and top-class song writers.

Gemini Pop Singers
American Pop Singers
Gemini Men
What Makes Daniel Skye So Special
As specified above, Daniel Skye differentiated himself from the crowd by composing and singing his own songs. Writing his songs gives a lot of control over his music. He could alter the tunes to suit his singing style and come out with music of outstanding quality. His lyrics are very modern and are attractive to his younger followers. In an interview, he said that he just relies on his vocal melody for composing songs and he will just pick his guitar and start playing whatever he wants to play. Freeing himself from the orthodox confines on lyrics and harmony has helped him in freeing up his soul to create outstanding music. Many of his fans consider his voice to be very engaging and his pop sound to be soulful. He is very charming looking and it is one of the main reasons why many of his followers are female. His maintains a unique personal style and dresses in minimal casuals, which is widely appreciated by his fans in Instagram feeds.

Beyond Fame
Daniel Skye does not have any affairs that are reported in the media. He is also known to prefer staying away from any conflicts with his costars which can hinder his career in future. He is a talented marketer of his work and intelligently uses social media to his advantage. He posts all his music covers on multiple social media channels before their actual release to create buzz around them.

Behind The Curtains
Daniel Skye had a good childhood in a loving family. He got good encouragement in his childhood from his parents who got him the required training to grow as a musician. His brother Robert Skye and sister Rebecca Skye too are musicians and perform along with Daniel in some of his videos. They also give their brother a lot of support in advancing his career.

Trivia
Due to his popularity as a singer he was invited as a special guest for the Magcon Tour in 2014. 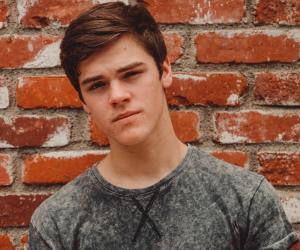