Conan O’Brien is a popular TV host, writer, and comedian, best known for hosting the talk show ‘Late Night with Conan O’Brien’ from 1993 to 2009. The Harvard graduate started his career as a writer for the ‘HBO’ sketch-comedy series ‘Not Necessarily the News’ in 1983. He then got an opportunity to write the episodes of ‘Saturday Night Live,’ for which he and his fellow writers won an ‘Emmy’ in 1989. He also wrote for the animated sitcom ‘The Simpsons’ and became a supervising producer of the series later. It was around this time that he got a chance to host a show for ‘NBC’ after David Letterman moved to host for another network. Conan soon started hosting ‘Late Night with Conan O'Brien.’ The show ended in 2009, with Conan thanking a lot of people who helped him with his career. Conan has appeared in a number of TV shows too, such as ‘Spin City’ (1998), ‘Robot Chicken’ (2005–2008), and ‘Nashville’ (2013). He has also been part of films such as ‘Bewitched’ (2005), ‘Thunderstruck’ (2012), and ‘Now You See Me’ (2013). In 2015, O’Brien became the longest-working of all current late-night talk-show hosts in the US. Jason Sudeikis
DID WE MISS SOMEONE?
CLICK HERE AND TELL US
WE'LL MAKE SURE
THEY'RE HERE A.S.A.P
Quick Facts

American People
Harvard University
Tall Celebrities
Tall Male Celebrities
Male Comedians
Childhood & Early Life
Conan Christopher O’Brien was born on April 18, 1963, in Brookline, Massachusetts, to Thomas Francis O’Brien and Ruth O’Brien.
He was the third of the six children of his parents. His has three brothers and two sisters.
His father was a professor of medicine at the prestigious ‘Harvard Medical School,’ a physician, and an epidemiologist. His mother was an attorney till she retired in 1997.
However, Conan always wanted to be part of the entertainment industry. He graduated from ‘Brookline High School’ as a valedictorian in 1981, before attending the prestigious ‘Harvard University.’
He majored in American history in 1985 from ‘Harvard.’ He had also written for ‘The Harvard Lampoon,’ the prestigious humor magazine of ‘Harvard,’ and was elected as the president of the magazine twice.
Continue Reading Below
Early Career
After completing his graduation, Conan moved to Los Angeles to work as a writer for ‘HBO’s ‘Not Necessarily the News’ (1985). He also performed for the improvisational group ‘The Groundlings’ during this time.
Finally, he found a job with the late-night comedy series ‘Saturday Night Live’ and worked as its staff writer from 1988 to 1991. Some of the most memorable skits written by him for the show were ‘Mr. Short-Term Memory’; ‘The Girl Watchers,’ which was performed by Tom Hanks; and ‘Nude Beach.’
He co-wrote the pilot of the show ‘Lookwell’ with Robert Smigel. It was broadcast on ‘NBC’ in 1999. The pilot never made it to TV screens, but later became a super hit. Soon, O’Brien quit ‘Saturday Night Live’ to explore other options.
He decided to roam the streets of New York and wait for a big break. Finally, he was asked to join the hit animation series ‘The Simpsons’ as a writer.
Career
He worked for ‘The Simpsons’ from 1991 to 1993, becoming the supervising producer of the show from 1992 to 1993.
In 1992, O’Brien was approached to produce ‘Late Night with David Letterman,’ since Letterman was about to quit. O’Brien’s agent made it clear that Conan would rather perform than produce.
He auditioned for the position of the host, and on April 26, 1993, he was chosen as the new host of ‘NBC’s late-night show, renamed as ‘Late Night with Conan O’ Brien.’ The show premiered on September 13, 1993, but received bad reviews. This made the show come close to being canceled.
In 1994, David Letterman appeared on the show and made a lot of positive statements that encouraged the team to keep going. Steadily, Conan started connecting with the audience. By its last season, the show became one of the most amazing transformations that TV had ever witnessed.
The show ran for 15 seasons after it was almost canceled due to lack of viewership. By 2005, the show had garnered an average viewership of 2.5 million.
Continue Reading Below
The show aired its last episode on February 20, 2009, with O’Brien ending the episode by using an axe to destroy the set. In 2009, O’Brien replaced Jay Leno as the host of ‘The Tonight Show’ on ‘NBC.’
However, the network’s undue politics and its decision to accommodate another comedy show (starring Jay Leno) with Conan’s show made Conan unhappy. He decided to quit the show after a year. The last episode of the ‘The Tonight Show with Conan O’Brien’ aired on January 22, 2010.
Conan was prohibited from making any kind of TV appearances for a while. During this time, he decided to start a 30-city live tour titled ‘The Legally Prohibited from Being Funny on Television Tour’ from April 12, 2010.
Before starting his tour, Conan announced that he would host a new show, ‘Conan,’ for ‘TBS.’ The show debuted on November 8, 2010, and was extended till 2022 in 2017.
In 2007, he co-wrote the pilot for the show ‘Andy Barker, P.I.’ He was also one of the executive producers of the show. The show was canceled even was after being named as one of the ‘Top Ten Shows of 2007’ by ‘Entertainment Weekly.’
Other Major Works
Conan also appeared in the TV shows ‘The Single Guy’ (1996), ‘Space Ghost Coast to Coast’ (1999), ‘DAG’ (2000), ‘The Office’ (2006), ‘Web Therapy’ (2012), and ‘Maron (2014). He made appearances in films such as ‘Vanilla Sky’ (2001), ‘Pittsburgh’ (2006), and ‘The Secret Life of Walter Mitty’ (2013).
O’Brien hosted the ‘54th Primetime Emmy Awards’ in 2002 and the ‘58th Primetime Emmy Awards’ in 2006. He also lent his voice to films such as ‘Batman: The Dark Knight Returns Part 2’ and ‘The Lego Batman Movie’ (2017).
His latest movie appearance was for the 2017 movie ‘Sandy Wexler,’ in which he played himself. He is currently the executive producer of the TV show ‘People of Earth’ (2016).
A documentary named ‘Conan O’Brien Can’t Stop,’ based on his life, was released in 2011.
Awards & Achievements
In 2011, Conan won the ‘People’s Choice Award’ for the ‘Favorite Talk Show Host.’ He has also won ‘Primetime Emmy Awards’ in 1989 and 2007.
He was part of the 2010 ‘TIME 100,’ a list of the 100 most influential people, compiled by ‘TIME’ magazine.
Personal Life & Legacy
Conan married Liza Powel, an advertising executive, on January 12, 2002, after dating her for a while. He had met Liza on the sets of ‘Late Night’ in 2000.
Conan and Liza have two children. Their daughter, Neve, was born on October 14, 2003, and their son, Beckett, was born on November 9, 2005.
In 2011, O’Brien was ordained as a minister by the ‘Universal Life Church Monastery,’ thereby allowing him to perform a same-sex marriage in New York. 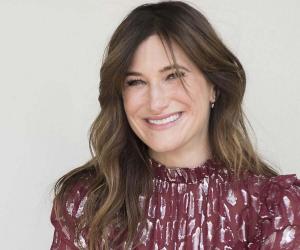