Advanced Search
Clay Aiken is a prodigious singer, who rose to fame on the second season of the hit reality show on television, ‘American Idol’. Immediately after the end of the show, he was offered a recording contract with the distinguished company, ‘RCA Records’. Some of his best known works under the label include ‘Merry Christmas with Love’, ‘A Thousand Different Ways’, ‘All is Well’ and ‘On My Way Here’. He has also had the privilege of working under another upcoming record label, ‘Decca Records’. Apart from his career in music, he has been a frequent talk show guest appearing on ‘The Tonight Show’ and ‘Jimmy Kimmel Live!’. He is also an active ambassador of the ‘National Inclusion Project’, which he also created and also serves on the board of ‘People with Intellectual Disabilities’. Another important facet of this young star’s career is his role in Broadway. He made his Broadway debut with ‘Spamalot’, where he played the role of ‘Sir Robin’. In the fast paced world of ‘on-and-off’ celebrities, Aiken has made his mark and is here to stay for a long time. His efforts and works have all been recognized by a large body of awards including the American Music Awards and Billboard Awards. American People
Tall Celebrities
Tall Male Celebrities
Male Singers
American Singers
Childhood & Early Life
Clayton Holmes ‘Clay’ Grissom was born in Chapel Hill, North Carolina. When he was an infant, his parents divorced and he took his mother’s maiden name, Aiken, as his legal last name.
He made his performing debut with the song, ‘Islands in the Stream’, at the age of five, at the Raleigh North Carolina, high school dance, in 1983.
As a teenager, he was a part of a number of church choirs, school choirs and was also with the local school band, ‘Just By Chance’. After he completed high school, he attended University of North Carolina at Charlotte, where he studied ‘Special Education’.
In 2003, he planned to attend William & Mary College, but eventually decided that he would want to try to get into the second season of ‘American Idol’ first.
He was selected from hordes of contestants and although his education was put on hold, he managed to obtain his bachelor’s degree in special education, while on tour, in 2003. 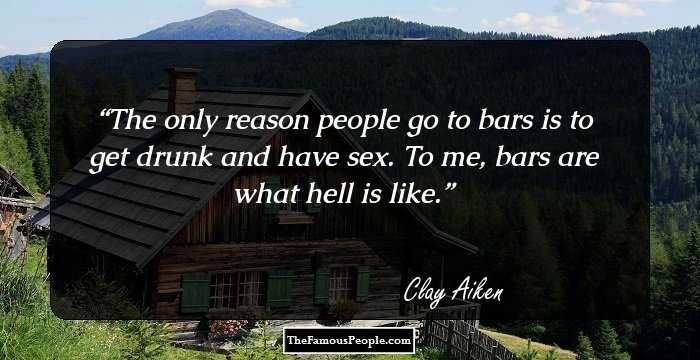 Quotes: Me, Like
Continue Reading Below
Career
On May 21, 2003, Aiken was placed a close-second after the winner, Ruben Studdard won the ‘American Idol’ title by 1,34,000 votes. The same year, he released his debut solo album, ‘Measure of a Man’, which featured on the Billboard countdown.
In 2003, he was seen in the television special ‘Christmas Day Parade’ by Disney. The next year, he produced his first TV special titled, ‘A Clay Aiken Christmas’, which featured special guests like Barry Manilow, Megan Mullally and Yolanda Adams.
In 2004, he released a holiday album, ‘Merry Christmas With Love’, which became the fastest-selling holiday album. The album also went on to receive RIAA certification. The same year, he also made his acting debut in ‘Ed’, where he played himself.
In 2004, he also authored the book, ‘Learning to Sing: Hearing the Music in Your Life’.
In 2006, he released his second studio album, ‘A Thousand Different Ways’. The same year, he made an appearance as himself on ‘Days of our Lives’.
He released his album ‘All Is Well’ on November 28, 2006, which was also released digitally to iTunes the following year. Around the time of its release on iTunes, he also appeared on the show, ‘Jimmy Kimmel Live!’.
‘On My Way Here’ was released on May 6, 2008, which was the last album that was produced by RCA Records. After that, the two split ways. The following year, he released, ‘The Very Best of Clay Aiken’.
In 2009, he signed a record contract with Decca Records and released the album, ‘Tried and True’ the subsequent year.
In 2011, he released his new single, ‘Bring Back My Love’ under Decca Records, which went on to create waves in the world of music.
Continue Reading Below
In 2012, he released ‘Steadfast’, a new album of previous recordings sung in concerts. The same year, he was a celebrity contestant in the fifth season of ‘The Celebrity Apprentice’.
He is the 2014 Democratic nominee in the North Carolina 2nd congressional district election. 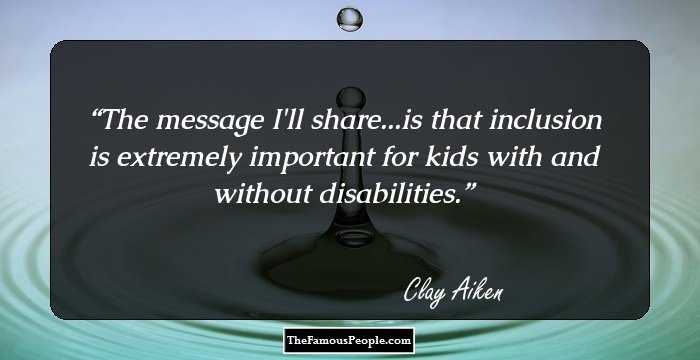 Major Works
‘Measure of Man’, his debut record, released in 2003 sold over 3 million copies around the world and featured no.1 position on the Billboard 200. The album won a Billboard Award. This debut album is considered his magnum opus, because it also went triple-platinum in the first go.
Awards & Achievements
In 2003, he won the American Music Award under the category of ‘Fan’s Choice’.
He won the Billboard Award for ‘Best Selling Single of 2003-Bridge Over Troubled Water/This Is The Night’, in 2003.
In 2004, he won the Billboard Award for ‘Best Selling Christmas/Christian Album- Merry Christmas with Love’.
He won the New Music Weekly Award for ‘Top 40 Male Artist of the Year’, in 2004.
He won the American Christian Music Award for ‘Outstanding Yule CD - Merry Christmas With Love’, in 2005.
He won the Robert M. Barg Memorial Achievement Award in 2005.
He won the National Center for Learning Disabilities’ Children’s Advocacy Award’, in 2007.
He won ‘The Family Circle Award from the Family Equality Council’, in 2009. 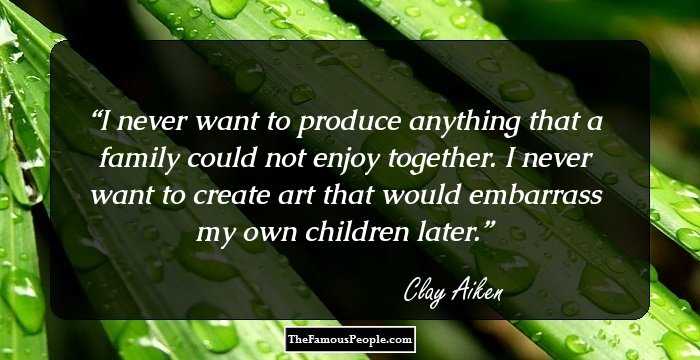 Quotes: Together, Never, Family, Children, Art, I
Personal Life & Legacy
He is actively involved with a number of multiple benefit events and organizations such as ‘People with Intellectual Disabilities’, ‘National Inclusion Project’ and ‘UNICEF’.
He disclosed that he was gay in 2008 and he is involved in a number of organizations pertaining to gay rights. The same year, he announced the birth of his son, Parker Foster Aiken, with his friend, Jaymes Foster.
He has had a liposuction under his chin, while he underwent a treatment for a joint disorder.
Trivia
This popular singer-songwriter, who almost won the second season of ‘American Idol’, is allergic to many foods including all ‘tree nuts’.

See the events in life of Clay Aiken in Chronological Order