(Martial Artist and Actor Best Known for His Action Movies)

Advanced Search
Carlos Ray ‘Chuck’ Norris is a martial artist who has appeared in a number of action films and television series. He is most famous for founding his own school of martial arts, ‘Chun Kuk Do.’ Name and fame seemed like a far-fetched dream for Chuck Norris who was a shy child. Moreover, he was not inclined towards athletics. While serving in the ‘United States Air Force’ as an air policeman, he was stationed at the ‘Osan Air Base’ in South Korea where he became interested in martial arts. He began training in Tang Soo Do and went on to earn black belts. He then opened a chain of Karate schools after his discharge from the ‘Air Force’ and founded his own martial arts school, ‘Chun Kuk Do.’ In his illustrious career as a martial artist, he has scored victories over renowned martial artists like Skipper Mullins, Victor Moore, and Steve Sanders. He not only won the ‘Professional Middleweight Karate Champion’ title but also held it for six consecutive years. In addition to being a martial artist and actor, Norris is also a well-known author of Christian books. American People
Martial Artists
American Men
Oklahoma Actors
Pisces Actors
Childhood & Early Life
Chuck Norris was born on 10 March 1940, in Ryan, Oklahoma, USA, to Wilma and Ray Norris. His father, who took up jobs as mechanic and driver, was an alcoholic. His parents divorced when he was a teenager and his father walked out of his life. He then helped his mother raise his younger brothers.
He attended ‘North Torrance High School.’ He was a shy and average student who did not think much of himself. 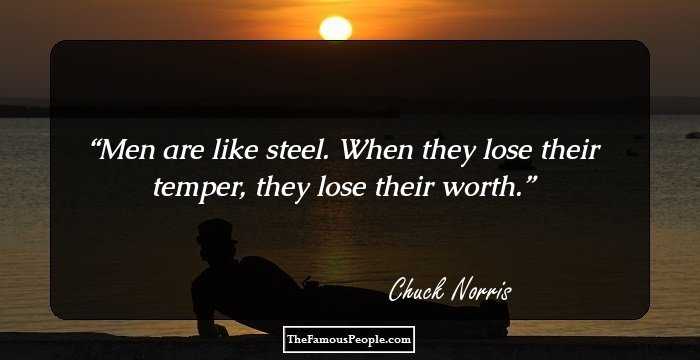 Quotes: Like
Continue Reading Below
Career
He began his career in the ‘United States Air Force’ as an air policeman in 1958. He was sent to ‘Osan Air Base’ in South Korea where he became interested in martial arts. He began training in Tang Soo Do and earned black belts.
He continued working as an air policeman at the ‘March Air Force Base’ in California after returning to the United States. He started working for the ‘Northrop Corporation’ after being discharged in 1962.
He opened a chain of Karate schools spread across different cities during the 1960s. He was very popular as an instructor and had several celebrity students, including Steve McQueen, Bob Barker, and Priscilla Presley.
He also participated in various martial arts tournaments. He lost his first two tournaments to Joe Lewis and Allen Steen, respectively. He also lost three of his matches at the ‘International Karate Championships’ to Tony Tulleners. However, he refused to give up.
By the late-1960s, he had worked on his technique and won the ‘Professional Middleweight Karate Champion’ title on 24 November 1968; he would defend this title five more times till 1974. He won ‘Karate’s Triple Crown’ after winning the most number of tournaments in the year 1969.
He decided to try his hand at acting after being encouraged by his celebrity student Steve McQueen. He made his acting debut in 1969 in the movie ‘The Wrecking Crew.’ His role was however uncredited.
He met the popular martial artist Bruce Lee during a martial arts demonstration in Long Beach. He appeared as ‘Colt’ in Bruce Lee’s directorial debut ‘Way of the Dragon’ in 1972. The movie was a super hit.
At the behest of McQueen, he began attending acting classes at ‘MGM.’ He had his first starring role in the 1977 action film ‘Breaker! Breaker!’ in which he played a trucker whose friend gets killed by a policeman.
He proved to be a bankable actor during the 1980s. He appeared in a series of action films, including ‘The Octagon’ (1980), ‘Lone Wolf McQuade’ (1983), ‘Code of Silence’ (1985), and ‘Hero and the Terror’ (1988).
Continue Reading Below
In 1990, he created the martial art style, ‘Chun Kuk Do’ which is based on the Tang Soo Do art form. The Korean term ‘Chun Kuk Do’ is loosely translated as ‘The Universal Way.’ ‘The United Fighting Arts Federation’ (UFAF) holds the Chun Kuk Do world championship tournament in Nevada.
In 1990, he became the first ever Westerner in the history of Tae Kwon Do to be given the rank of 8th Degree Black Belt Grand Master.
He starred in the popular action crime drama television series ‘Walker, Texas Ranger’ which ran for eight seasons from 1993 to 2001. The series was broadcast in over 100 countries and was famous for its moral values.
A television movie titled ‘Walker, Texas Ranger: Trial by Fire’ was made in 2005. The movie was based on the popular television series of the same name. Norris reprised his role as ‘Cordell Walker’ in the movie.
In early 2005, the martial artist shot to fame when American humorist Ian Spector created the ‘Chuck Norris facts,’ a collection of absurd, hyperbolic, and fictional claims. Chuck went on a tour of the same name and visited the troops in Iraq in an attempt to boost the morale of the troops.
In 2006, he published his first book ‘The Justice Riders.’ The following year, he released its sequel ‘A Threat to Justice.’ In 2008, he published his non-fiction political book ‘Black Belt Patriotism: How to Reawaken America’ which peaked at number 14 in New York’s Best Sellers list.
From 2010 to 2012, he appeared in a number of advertisements for ‘T-World,’ ‘World of Warcraft,’ and ‘BZ WBK Bank.’ In 2012, he was cast as ‘Booker’ in the action film ‘Expendables 2’ alongside an ensemble cast, including Sylvester Stallone, Arnold Schwarzenegger, and Jason Statham.
He also became the face of the video game ‘Chuck Norris: Bring On the Pain.’ He produced ‘Non Stop Chuck Norris,’ an isometric action-RPG game for mobiles.
Since 2015, Chuck has been appearing in a number of commercials for brands, such as ‘Hoegaarden beer,’ ‘United Healthcare,’ ‘Hesburger,’ ‘Cerveza Poker,’ and ‘Toyota.’ He was also the brand ambassador of ‘Fiat’ automobiles.
Continue Reading Below 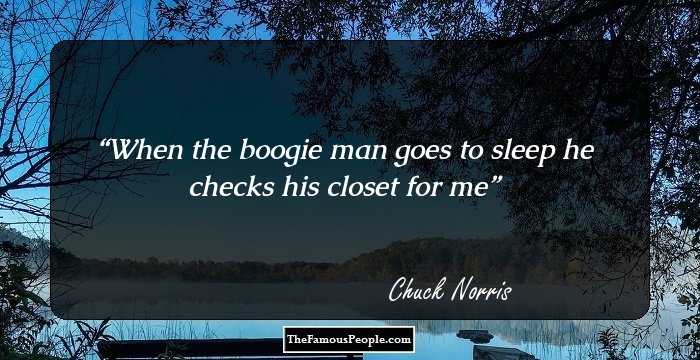 Quotes: Me
Major Works
He founded Chun Kuk Do, which is a hybrid martial art style. It evolved from Tang Soo Do and borrows elements of different fighting styles. The art form includes a code of honor and rules that need to be followed.
Awards & Achievements
He was named the ‘Fighter of the Year’ by ‘Black Belt Magazine’ in 1969.
He was presented with the ‘Golden Lifetime Achievement Award’ in 2000 by the ‘World Karate Union Hall of Fame.’
In 2007, he was made the honorary United States Marine at Washington D.C.
He was bestowed with an honorary title of ‘Texas Ranger’ in 2010 by the then-Texas Governor Rick Perry. Seven years later, he was honored with the title ‘Honorary Texan’ due to his long stay at his ranch in Navasota, Texas. 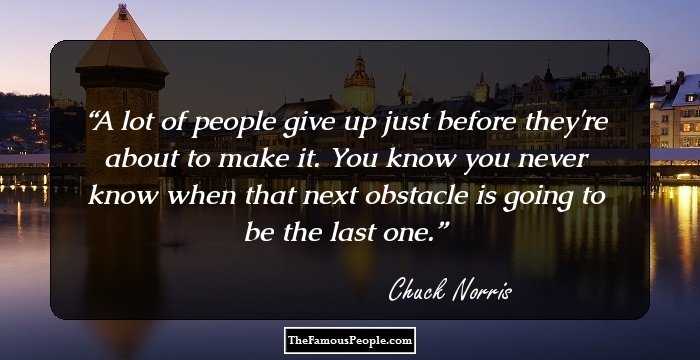 Quotes: You, Never
Personal Life & Legacy
He married Dianne Holechek in 1958 and had two sons with her. He also had a daughter named Dina with another woman when he was still married to Dianne. He and Dianne divorced in 1989.
His second marriage was to former model Gena O’Kelley in 1998. The couple had twin children in 2001. He also has several grandchildren.
He is well-known for his philanthropy. He contributes towards organizations, such as ‘Funds for Kids,’ ‘United Way,’ ‘Vijay Amritraj Foundation,’ and the ‘Make-A-Wish Foundation.’
Trivia
This martial artist is the subject of an ironic internet meme which lists absurdly heroic and funny fictional facts about him.

Quotes By Chuck Norris | Quote Of The Day | Top 100 Quotes

See the events in life of Chuck Norris in Chronological Order